Freight rates from North Asia to the UK hit an all-time high on Jan. 4, as demand continued to rise and ongoing equipment shortages plagued the market, leaving carriers with little option but to increase rates in order to maintain profit margins.

Platts Container Rate 11 — North Asia-to-UK — hit $10,000/FEU, an increase of 285% from Nov. 30, and these strong rates are expected to continue through towards the end of the quarter.

“It is a combination of spiking demand and endless congestion which is tying up the empty containers — this will push right through into [Lunar] New Year [Feb. 12], nobody is taking any bookings between now and then,” said a UK-based freight forwarder.

Market participants are keen to avoid a repeat of the 2020 Lunar New Year holidays, which saw the start of the coronavirus related lockdowns and resulted in a very slow return to Chinese exporting demand, causing some of the equipment-related issues that have dominatedmthe container market for much of the past year.

As such, demand is already booked through the holiday period in China, prompting hopes for a swift return to work to deal with the order backlog, however with cases starting to gently rise, albeit from a very low base, some in the market are voicing concern that these optimistic sentiments could be short-lived.

Despite this, freight forwarders have told Platts that containers booked at lower rates are not being loaded onto vessels.

“I’ve just had 60 containers canceled; they were meant to be heading to Europe,” said one freight forwarder. 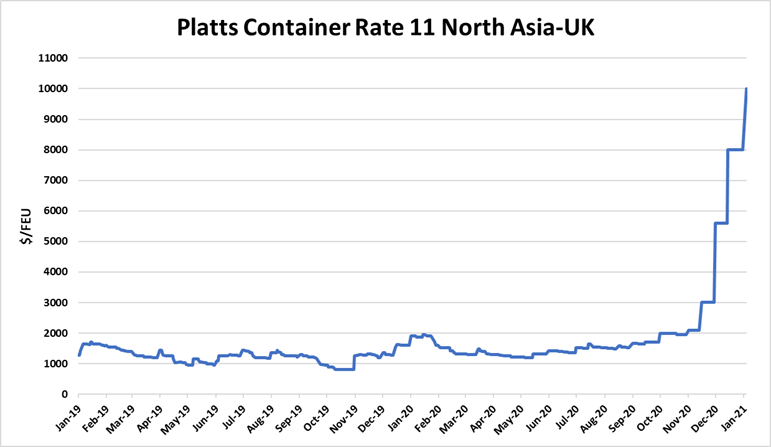 Rates to the UK saw a greater increase than those to the North Continent at the end of 2020, as businesses sought to stockpile goods before the UK left the EU customs union without a deal — a scenario that ultimately didn’t play out.

Uncertainty over the future trading relationship and fears of delays at the border due to customs checking led to increased demand for goods. This, together with changes in consumer spending habits away from services towards consumer goods, seasonal pre-Christmas demand and businesses restocking after shutting due to national lockdowns, left ports struggling to cope with the increased volumes — a sentiment that has carried over into the new year with congestion still at the forefront of many carriers’ minds.

Felixstowe — the largest container port in the UK — has borne the brunt of the increase in traffic and has faced subsequent delays. As well as an increase in demand, storage capacity at the port has been reduced in recent months as government supplies of PPE (personal protective equipment) have been held at the port. However, according a statement released by the Port of Felixstowe on Dec. 13, the volume of PPE containers has “reduced significantly since their peak.”

Delays at Felixstowe have led to some carriers amending their schedules away from the port. Maersk and MSC now call at Liverpool on their transatlantic services TA2 and NEUATL2 respectively. Those carriers that do still stop at Felixstowe have now introduced a congestion surcharge; Hapag-Lloyd is currently charging $175/TEU for all cargo from Asia passing through the port.

According to one freight forwarder, this might be only the beginning of the UK’s woes. “The UK may cease to be served by the large carriers, instead only feeder vessels will service UK ports,” they said.

The need for carriers to reposition empty containers has also led to some no longer taking bookings for loaded container exports from Europe for the foreseeable future, putting pressure on UK and European based exporters.

“These are totally theoretical numbers, nobody is taking bookings,” said a carrier source.

State procurement in the Arctic up 37 percent in 2020