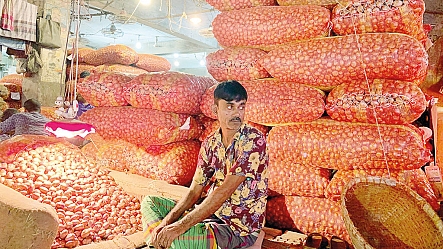 Consumers have reduced consumption of onion as many of them cannot afford the high prices of the essential cooking ingredient, which has also led to its reduced sale of the item at kitchen markets.

Talking to Dhaka Tribune at Shantinagar Bazar, she said: “I bought only 250gm onion instead of planned one kg. Were it not an essential item, I could have stopped buying it.”

Iman Ali, a wholesaler at Kawranbazar, said he usually sold 100kg to 120kg of onion every day but yesterday he sold only 17kg as people reduced their intake due to high prices.

However, the price gap between retail and wholesale markets is around Tk50 per kg.

At Karwanbazar wholesale market, traders were selling a sack of five kg local onion for Tk900 to Tk1000. On the other hand, five kg imported onion sold between Tk800 and Tk900.

Rotten onions sold for Tk120 to Tk150 per kg at Karwanbazar.

Asraful Alam, a private official, who went to Karwanbazar to buy onions, was shocked at the spiraling prices.

“Such a high price of onion I have never seen in my lifetime. I bought only a kg onion, instead of planned four kg,” he said.

Venting his frustration, Asraful said the government should deal the crisis with iron hands as dishonest traders were behind the skyrocketing prices of onion.

Talking to Dhaka Tribune, Mamun Khan, a wholesaler at Shyambazar, said that the onion price dropped a little owing to the government’s import initiatives.

“But still our supply is insignificant for the demand,” he added.

LCs (letter of credits) have been opened to import 75,000 tons of onion from Myanmar, Turkey, China, Pakistan and Uzbekistan to contain its abnormal price hike.

On the other hand, 6,145 tons of onion were already imported between October 12 and November 12, according to the data of Chittagong Customs.

On September 29, the Indian government banned the export of onion with immediate effect until further order in order to improve their domestic availability of onions.

To tackle the situation, the Trading Corporation of Bangladesh (TCB) started selling onion from early October through open market sale (OMS) scheme at various points across the capital.