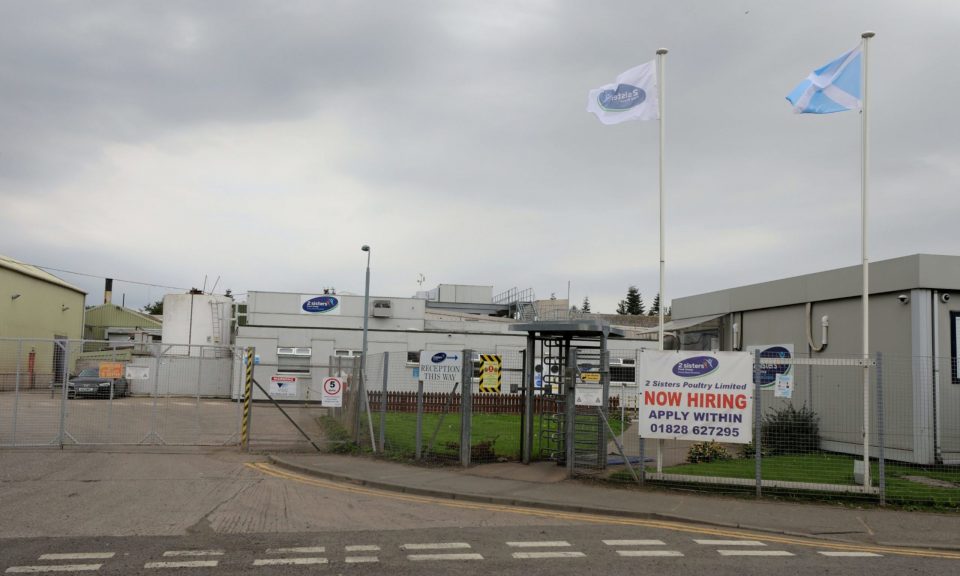 A Perthshire chicken factory that employs more than 1,000 people has been hit by a second coronavirus outbreak.

The 2 Sisters plant in Coupar Angus was shutdown earlier this summer when nearly 200 employees and about 30 of their community contacts tested positive.

Now concerns have been raised about five new cases amongst employees at the George Street plant.

Staff said they were never officially informed about the infections, but only found out  through “word of mouth”.

And a spokesperson for company initially told The Courier that claims staff had tested positive were “completely untrue”, despite confirmation from NHS Tayside and Perth and Kinross Council.

The factory, which put in place a series of measures after the last outbreak, is still open.

Perth and Kinross Council leader Murray Lyle said: “We are monitoring the situation and will carry out a review in the morning.

“It is very disappointing to hear that we have another outbreak at this factory. We are dealing with single figures at the moment, but I personally have concerns about the potential for this outbreak to escalate.”

An NHS Tayside spokeswoman added: “NHS Tayside’s Health Protection Team has been made aware of five cases of Covid-19 connected to the 2 Sisters Factory.

“The factory is working closely with NHS Tayside’s public health team and the usual arrangements for contact tracing and self-isolation are in place. At this stage no further action is required.”

It is understood those affected include at least one contract worker.

Perthshire North MSP John Swinney said: “News of a second outbreak at 2 Sisters will clearly be of concern to both employees and the wider community.

“As with the previous outbreak, it is imperative that the correct public health protocols are followed to ensure that the virus does not spread any further.”

Despite initially dismissing claims of a new outbreak, a spokesperson for the company confirmed after further checks that there had been five cases in the last 24 hours.

The firm declined to say why staff had not been told about the new cases.

The partner of one employee said: “What people can’t understand is why it hasn’t been made public after what happened last time.

“Why have they not told the workers?

“It’s just got out through word of mouth during breaks and people speaking to each other.”

She claimed agency workers were still being brought into the factory.

“It’s going to lead to big trouble,” she said. “You saw what happened last time.”

All 900 staff and their households were sent into quarantine during the earlier outbreak in August.

A mobile testing station was set up by the military in the grounds of the factory, while other units were put in place for staff in neighbouring Dundee and Angus.

Huge efforts were made by Perth and Kinross Council to encourage all staff to get checked, with information packs produced in Bulgarian, Polish and Romanian.

Food parcels were delivered to workers isolating at home throughout the two-week quarantine.

Jason Leitch, the National Clinical Director, later said it had been “astonishing” that the Coupar Angus cluster had not spread further, saying the willingness of workers to self-isolate had been crucial to getting the virus under control.

The incident was also highlighted by First Minister Nicola Sturgeon as a successful example of Test and Protect in action.