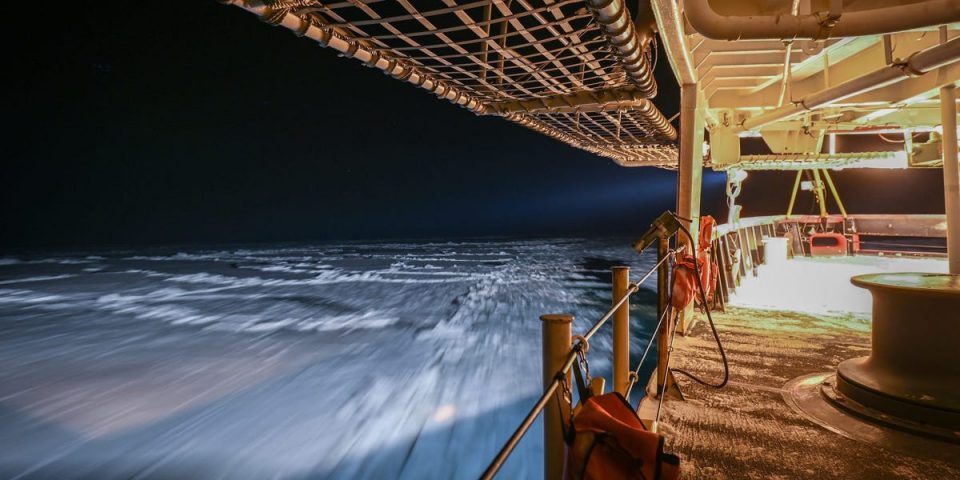 US Coast Guard icebreaker Polar Star has sailed farther north than any other Coast Guard cutter, a record-setting trip for a 44-year-old ship that is currently the nation’s only functioning polar icebreaker.

Polar Star, which is also US’s only heavy icebreaker, reached what the Coast Guard called a “record-breaking winter Arctic latitude” of 72° 11′ N on December 25, just a few weeks into a months-long deployment.

“The crew achieved a notable milestone Christmas Day by traversing farther into the harsh, dark winter Arctic environment than any cutter crew in our service’s history,” Capt. Bill Woitrya, Polar Star’s commanding officer, said on Tuesday. “Our ice pilots expertly navigated the Polar Star through sea ice up to four-feet thick and, in doing so, serve as pioneers to the country’s future of Arctic explorations.”

“This is the first time since 1982 that a Coast Guard icebreaker is going to be north of the Arctic Circle in the winter,” Woitrya said at a Wilson Center event in November.

The trip comes after the medium icebreaker Healy, the only other US icebreaker, broke down as it sailed to the Arctic in mid-August. Polar Star makes an annual resupply trip to the McMurdo Sound research station in Antarctica around this time of year, but that was canceled due to the COVID-19 pandemic, freeing it to head north.

Polar Star can break ice up to 21 feet thick but is well beyond its 30-year service life and has a history of maintenance problems, including a breakdown in the remote South Pacific in 2019.

During this trip north, Polar Star’s engineers have worked “around-the-clock to keep frozen machinery equipment running and the ship’s interior spaces warm enough for the crew,” the Coast Guard said.

US icebreakers have become a hot topic as climate change makes commercial and military activity in the Arctic more viable.

American officials have cited the gap between the US icebreaker fleet and Russia’s, which is some 50 ships and growing, as a worrying shortcoming. Russia has the world’s longest Arctic coastline and is investing heavily in the region, but the US is scrambling to start closing what it sees as a capability gap.

The Coast Guard awarded a contract for its next polar security cutter, as its future icebreakers are known, in April 2019. Work is set to begin in 2021 with delivery expected in 2024.

“This is the initial build for the fleet of icebreakers, including at least three polar security cutters,” Adm. Karl Schultz, the Coast Guard’s top officer, said at a Wilson Center event this month.

The White House has set 2029 as the date for having an “operationally tested and fully deployable” icebreaker fleet, and US officials have looked into leasing other icebreakers while those ships are built.

“In the high latitudes, presence equals influence. Acquiring these assets is a critical investment priority as other nations, including non-Arctic states, are present in the Arctic today,” Schultz added, referring to China, whose Arctic ambitions concern the US.

Woitrya said in November that the Coast Guard will be able to operate “as needed” in the Arctic and Antarctic “by the end of the decade.”

“We’re looking into and examining the different opportunities for what presence looks like and what a rotation of vessels is, as well as the long tail of logistics that will be required to support that — not just the mechanical support and the boats and helicopters and the [unmanned aerial vehicles] that will support it, but also the training and the human capital that goes into operating those vessels in that environment,” Woitrya said at the November event.

“There’s a very small cadre of individuals in the Coast Guard that are ready and familiar with these operations in these areas, and so we’re taking steps to ensure that we build a huge group of folks that can respond to that call,” Woitrya added.

Increasing military activity in the Arctic has raised concerns about militarization and potentially conflict in what has long been a low-tension region.

The Coast Guard has said Polar Star’s deployment is “to protect the nation’s maritime sovereignty and security” in the region and build proficiency operating there, and Woitrya stressed that it shouldn’t be seen as “overreach.”

“We have territorial seas and an exclusive economic zone surrounding Alaska that has been largely neglected for many years because of the Coast Guard’s limited capacity,” Woitrya said in November. “We’re going to go up and operate … and provide that presence on the surface that has been missing for a very long time.”