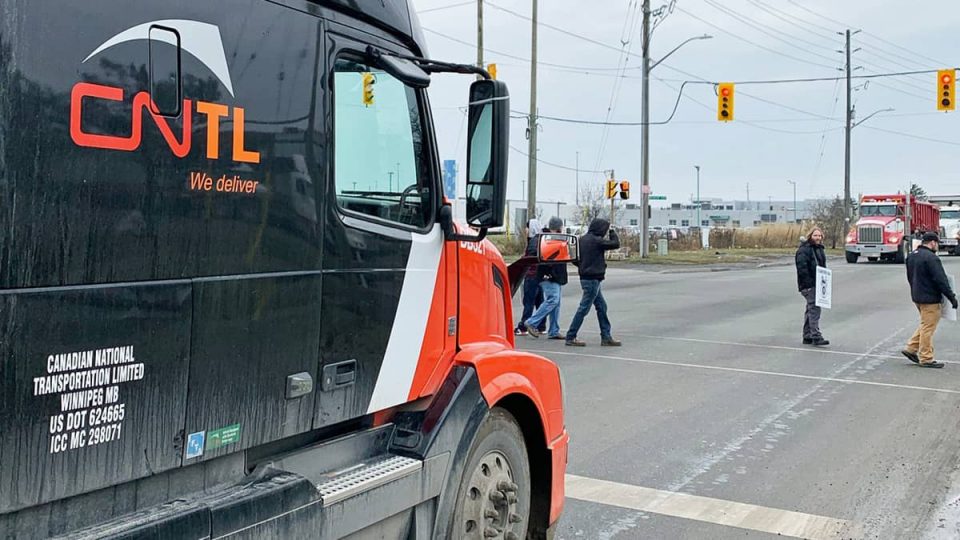 Nearly three days into a strike by thousands of Canadian National (NYSE: CNI) rail workers, the ripple through Canada’s supply chain intensified across the country as pressure mounted on the federal government to end the strike through mediation or legislation.

In Quebec, Premier François Legault warned that the province will run out of propane within days. In Alberta, the disruption hit oil-by-rail shipments — itself a temporary measure. For trucking, the strike threw a curveball at a freight market contending with excess capacity and softer volumes of freight.

“Toronto is brutal,” Corey Darbyson, director of Transport Dsquare, a small Quebec-based carrier, wrote in a text message to FreightWaves on Nov. 21. “I hope CN and the union rectify this soon.”

At CN’s Toronto-area terminal in Brampton, Ontario, trucks contended with picket lines to access curtailed intermodal operations. Sources outside CN suggested the company may be leaning on cross-trained management and other nonunionized workers.

CN did not immediately respond to questions about its response to the strike.

At the Port of Halifax, linked to CN’s network through on-dock access, car-shipper AutoPort abruptly issued layoff notices to employees, according to the union Unifor.

As the fallout intensifies, the pressure will mount on Prime Minister Justin Trudeau to reconvene Parliament early to legislate the CN workers back on the job. If the strike lasts until the next parliamentary session, on Dec. 5, TD economists Brian DePratto and Derek Burleton projected the Canadian economy could lose C$3.1 billion.

For now, CN and officials from the Teamster Rail Conference, the union representing the conductors, trainpersons and yard workers, remain in federally mediated contract talks. Working conditions and benefits appear to be sticking points, with the Teamsters demanding remedies for what they consider unsafe working conditions.

CN has been tight-lipped since the strike began, but CEO JJ Ruest issued a statement Nov. 21 proposing that the two sides enter into binding arbitration.

Ruest suggested that CN had made proposals to alleviate safety concerns.

“Safety is a core value at CN. Although the union has claimed that the strike was about safety, those statements do not reflect our discussions,” Ruest said. “For the safety concerns raised, we have proposed viable solutions because we want all employees to go home safely at the end of their shift.”

The Teamsters said, however, that binding arbitration was a non-starter. Spokesperson Christopher Monette said the union was sympathetic to fears over the effects of the strike on Canada’s supply chain and economy.

“We understand the economic issues,” Monette said. “Ultimately we don’t think anyone should die trying to transport propane.”

How to overcome supply chain challenges

Drivers In Each Step Of The Forestry And Logging Market Supply Chain Include Large Consumer Base, Demand For Biomass, And Automated Management