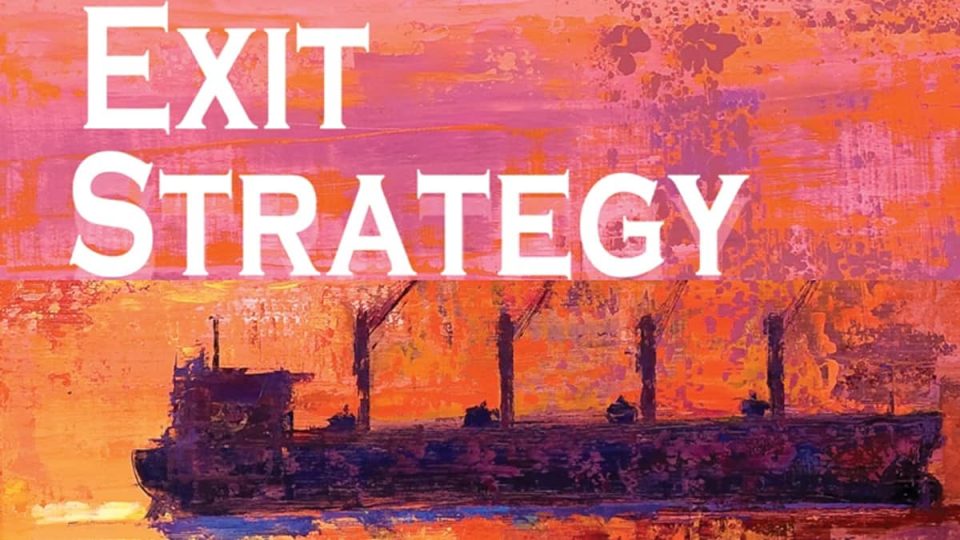 Nine years ago, Marine Money President Matt McCleery wrote “The Shipping Man,” a novel championing the old-school, risk-taking bravado of the ship-owning business. It captured the moment. Ship values had collapsed in the wake of the financial crisis and a new breed of investors — personified by the protagonist, hedgie Robert Fairchild — were placing huge bets on a cyclical rebound.

McCleery has just published the second sequel to his highly popular debut. The latest book, “Exit Strategy,” also captures the moment — a very different moment. The shipping industry and the world it operates in have dramatically changed over the past nine years.

Is this the end of speculative newbuild orders, extreme financial and operational leverage, ready access to risk-seeking equity? Management by gut instinct and the buy-low-sell-high ethos that can bring you from rags to riches overnight (and vice versa)?

In other words, all the fun stuff?

The old and new are personified in “Exit Strategy” by the characters Coco Jacobsen and Athena Bouboulina. Norwegian Jacobsen possesses the fame of John Fredriksen, founder of Frontline (NYSE: FRO). He has the towering build of Tor Olav Trøim, chairman of Golar LNG (NYSE: GLNG); his seemingly unfiltered musings recall those of Herbjørn Hanssen, CEO of Nordic American Tankers (NYSE: NAT); and he possesses the shipping-cycle faith of Scorpio Tankers (NYSE: STNG) President Robert Bugbee (who is a fan, once proclaiming: “Go Coco Go!”).

Bouboulina is the daughter of a Greek shipowner: young, brilliant, dedicated to saving the planet and cleaning up ship emissions via technology. She also sports tattoos, piercings and a shaved head. Think Marina Hadjipateras by way of Lisbeth Salander.

This is fiction, but McCleery has a habit of using farce to spoon-feed nonfiction lessons about the industry. His writing style is one part medicine, two parts Jägermeister.

There are allusions to real people, companies and places mixed into the cocktail. The characters Tim Torrance and Elaine Marstons are Marine Money’s Jim Lawrence and Lorraine Parsons, respectively. Einstein is Star Bulk (NASDAQ: SBLK) President Hamish Norton. The Montclaire Hotel is The Pierre. Algos Shipping is Signal Maritime. A suggestion to buy “ships that install offshore wind turbines” alludes to Scorpio Bulkers (NYSE: SALT). The comment “George did WHAT?! To WHO?!” can only refer to George Economou.

With that fiction-nonfiction mixture in mind, “Exit Strategy” paints the following real picture of the old and new schools of shipping:

In the old school, “everything is cyclical.” Shipowners are “addicted to the rush that came from … putting down just $5 million of working capital on a $500 million fleet that was hemorrhaging cash — based on blind contrarian faith that the market would turn.”

“Ships are options with propellers. The dumbest thing you can do is sell them when the market is down.”

Owners are not naïve, they’re “optimistic.” Hope is not a strategy, it’s the only strategy.

Old-school owners are male and do not collaborate. “There’s only room for one rooster in the henhouse.” They aspire to “dethrone the Dos Equis guy as the Most Interesting Man in the World.” They calculate figures in their head and don’t use computers.

They want to buy ships low and sell ships high, not operate ships and help customers move cargo from point A to B. “The business of operating ships is just hard work,” an “industrial grind.”

The old-school owners bank in Europe with lenders “foregoing a high return for the sake of … servicing multigenerational relationships.” They tap equity in New York where “capital … sought risk rather than desperately trying to minimize it.”

The old school is skeptical of ESG. “What do environmental, social and governance even have to do with each other anyway? … They are completely different things.” As for ESG-centric initiatives like the shipping banks’ Poseidon Principles: “That just gives a free ride to the lenders who don’t sign.”

The new school embraces ESG and believes “it isn’t just about economics anymore. It’s about the people in the streets, the consumers, who are demanding that corporations take better care of the environment.”

Even if the people in the streets don’t know about shipowners “they do know about the companies that charter the ships.” There’s no avoiding ESG. “Your ESG profile will be requested by your charterers, your insurance companies and your lenders before they will do business with you.”

The new school also believes there’s money to be made from ESG. “The data shows that companies with strong ESG policies actually outperform the ones with weak ones [and] …. there’s more money in solving the climate problem than there is in continuing to cause it.”

It’s all about software, not hard assets. As one character puts it, “Hard assets are the new herpes.”

New-schoolers are not focused on buying and selling ships — the “asset play is gone” — but on operating ships efficiently and cleanly in a world where there’s less debt and equity capital, less risk appetite and slower trade growth.

They believe in collaboration and that if you can “bring shipowners together in one room and convince them [to] work together, they have the power to change the world.”

“Exit Strategy” reads like a eulogy for the traditional testosterone-fueled model of ship ownership — a requiem for “The Shipping Man.”

The moral of the fictional story is that the old school is fascinating and worthy of reverence, but times have changed, the new school represents the “the right thing to do” and it’s inevitable.

In the nonfictional world, the question is: How inevitable is this, really? Billions of dollars’ worth of future investment decisions hinge on the answer.

A number of major ship charterers have just launched a carbon-reduction platform called the Sea Cargo Charter, mirroring what shipping banks are doing with the Poseidon Principles. But both platforms are just a start. They do not yet have the critical mass to inexorably change the shipping industry, absent regulation.

The inevitability of shipping’s embrace of ESG and decarbonization is a constant theme at shipping conferences (now virtual conferences) and in the shipping media that produce these events, including Marine Money.

But there is a reason for this focus beyond any belief that it’s “the right thing to do.” The reason is that this particular topic attracts event sponsors, generating revenue that supports media payrolls.

Just because a theme is ever-present in the shipping industry echo chamber doesn’t make it inevitable. For example, one constant theme at the events of Marine Money and Capital Link over the past decade was the “corporatization” of shipping.

When speaking at a Marine Money conference in 2013, private-equity giant Wilbur Ross, now the Secretary of Commerce, predicted the rise of “landlubbers in pinstriped suits” who were “buttoned-down, methodical and numerically driven, wedded to deliberative analytical processes … almost the antithesis of the intuitive entrepreneur who bets the whole business on a judgment call.

“This probably means the swashbuckling, larger-than-life characters typical of the industry will be less prevalent going forward,” asserted Ross. He could have been talking about swashbuckler Coco Jacobsen, given that he’s an avowed fan of “The Shipping Man.”

Ross is a much older and richer version of the Robert Fairchild character from that book. A newbie to the industry, Ross jumped into shipping via stakes in Diamond S Shipping (NYSE: DSSI), Navigator Holdings (NYSE: NVGS) and private entities.

Ross’ shipping investments have yet to pay off. Meanwhile, many of the “landlubbers in pinstriped suits” from private equity that rushed into shipping in 2011-14 have lost huge sums of money.

There’s a scene in “Exit Strategy” in which Torrance interviews Jacobsen on stage at Marine Money Week. Jacobsen is described as a shipping boss who rarely appears at conferences.

At the last live Marine Money in New York before the coronavirus, in November 2019, the Torrance inspiration, Lawrence, interviewed a shipping boss who rarely appears at conferences: Economou (as in: “George did WHAT?! To WHO?!”).

Lawrence asked Economou about prospects for a global carbon tax. “The problem is we can talk about it, but it’s the oil companies that will take the decision,” responded Economou.

“Can you imagine if the oil companies said they would put aside 30% of their profit to develop something new [i.e., fund the development of low-carbon-emitting shipping solutions]? If you were an investor in an oil company would you like that? No. So, I think they will resist it. And it’s not going to happen anytime soon.”

Spoiler alert: That is not the theme of “Exit Strategy.” Click for more FreightWaves/American Shipper articles by Greg Miller

Is the Election a Bigger Risk Than COVID-19 for RH Stock?

MotoGP, Bagnaia: “I’ll be a factory rider in 2021, it’s not acceptable that I go so slowly”

The end of the global supply chain