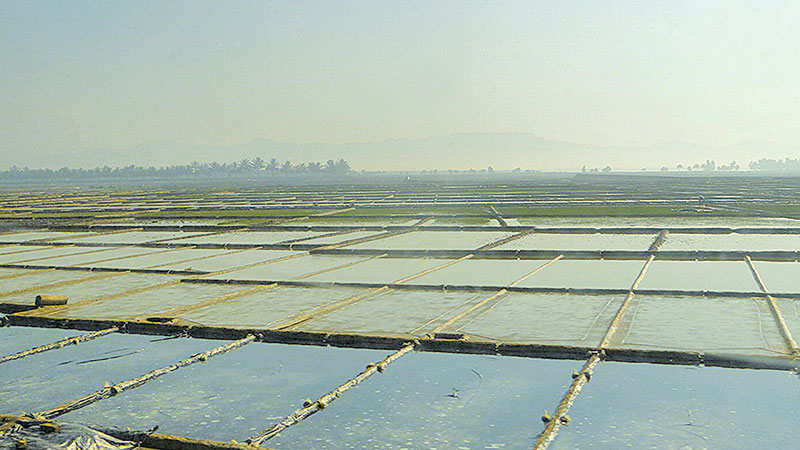 Salt production in Bangladesh is being hampered due to climatic reasons leaving the country behind the target of salt export to the net buyer. The climatic reasons include uneven rain, rough weather and breaching of embankments.

Salt is an essential industrial commodity of Bangladesh. According to National Salt Policy, 2011, this sector annually contributes Tk.300 to Tk.350 cores to the national economy and employs about half a million people directly or indirectly in the different stages like production, refining, preservation, storing and marketing of salt.

Records show that nearly 45,000 salt farmers operated on 64,000 acres of land in the country, overwhelmingly concentrated in Cox’s Bazar, especially in Kutubdia and Moheshkhali island, that contribute around 95 per cent of country’s crude salt production.

In Bangladesh, salt is usually produced in open saltpan through natural evaporation process (e.g. open sky/solar dried), hence the entire cycle of crude salt production is dependent on the favourable weather condition e.g. lesser amount of rainfall, strong sunny days, etc. Such a weather condition prevails only in winter and pre-monsoon season (between the months of November to May).

As a result, the country failed to reach the production target and was bound to import nearly one million metric tons of salt during 2015-2017 period worth of 120 million USD roughly, according to a report of Bangladesh Small and Cottage Industries Corporation (BSCIC).

The demand for salt especially in the developing countries is increasing, but its production potential is decreasing due to consistent rise in weather anomalies. This situation is also likely to be hard hit by climate change over the coming decades, according to a study carried out by Network on Climate Change Bangladesh (NCCB). This is particularly distressing for the developing countries.

Therefore, in the recent future, the climate shocks may appear as the direct cause for decline in salt productivity in the developing countries and this may increase dependency on importing salt from the industrially developed and growing economies, such as the leading greenhouse gas emitters China, USA and India.

In Bangladesh, gradual trend of increased amount annual and pre-monsoon rainfall (March-April-May) with increased number of heavy precipitation days and lesser number of consecutive dry days have been observed, said the study.

The situation may lead to shorten the salt producing season, hamper production, may influence to change livelihood, increase loss and damage, etc.   Not only change in monsoonal rain, but also the frequency and intensity of tropical cyclones have also been reported to increase in recent decades. Several studies like the ones by Girishkumar and Ravichandran, 2012; Dasgupta et al., 2014; Balaguru et al., 2014; Chowdhury and Ndiaye, 2017 anticipated that the El Nino/La Nina events will further intensify the threat of cyclonic activities in Bangladesh and could double in the future due to global warming.

Considering the increasing risk of weather extremes, insurance as a risk transfer mechanism could be supportive to reduce the risks of loss and damage from extreme weather events.

However, the insurance sector in Bangladesh is rather on an initial stage to think about a new package for transferring the risks of the natural catastrophe like cyclones, rainfall variability, drought, etc.

The higher trends of SLR in the Chittagong and Cox’s Bazar coast compared to the previous study findings of SMRC (2003), could also reduce the island as well as the means of livelihood e.g. salt farming in the island.

Moreover, the island is also highly exposed to the risk of tropical cyclones. Chowdhury (2018) identified the southeastern coastal (Southern Chittagong, Cox’s Bazar and Teknaf) belt as the most impacted and more exposed to cyclonic events during the pre-monsoon season; and this further threatened the salt farming in this area. The salt cultivation in Kutubdia is in peril as repeated embankment breaching, tidal inundation and unusual rainfall have been hampering the salt production, reducing salt production area and season, said the NCCB study.

The frequency and severity of this kind of rapid and slow but low-exposed disasters have increased at an alarming rate in this area in the last few years.

The field level study identified that the salt farmers are smallholders who usually take lease saltpans from the local landowners or from the government on yearly rental basis. They use manually operated local equipment in salt production and harvesting. Community-focused land leasing systems, sufficient credit facilities, use of mechanical equipment (water pump, leveler, etc.) and reliable weather forecasting can enhance salt production. Moreover, the formation of salt farmer’s cooperatives can ensure bargaining power and maximize economic return (i.e., salt price) for their standard of living.

Though there are very limited opportunities for initiating adaptive measures to save the yield from cyclone surge, tidal inundation or heavy rainfall, the salt cultivators are mainly using polythene/plastic sheets to cover stacked salts to protect from the fog in winter and rain during the pre-monsoon season. But it is very temporary in nature and not even enough to protect salts from unpredicted rain, which may arise quickly from the Bay and will not allow the necessary time to cover the field.

At the same time, as a traditional technique, salt farmers used to store salts under the salt fields by digging a deep hole or well, deposit salts in the well and finally intensely filled the top few feet with soil. Using polythene or plastic sheet to cover the top of the dug well before filling it with earth is traditionally very popular.

This technique allows the water to flow over the covered hole easily during the rainy season and left the salt in useable condition. After the rainy season or in the late monsoon, the holders remove the earthen few feet from the top of the well and collect their salt from the deposit. But, fear of sudden cyclone, unexpected tidal inundation or heavy rainfall during the productive period still remains.

In the last four fiscal years, the country failed to reach the salt production target due to unfavorable weather conditions such as unexpected heavy rainfall and tidal inundation. Consequently, Bangladesh had to import nearly one million metric tons of salt, worth of 120 million USD. Therefore, this country could claim equivalent compensation from the international loss and damage fund!

At the same time, the researchers and academicians should also initiate a comprehensive study for exploring solutions to save the marginal farmer from the unfavourable nexus of ‘nature and market’.

The writer is a Special Correspondent of The Independent