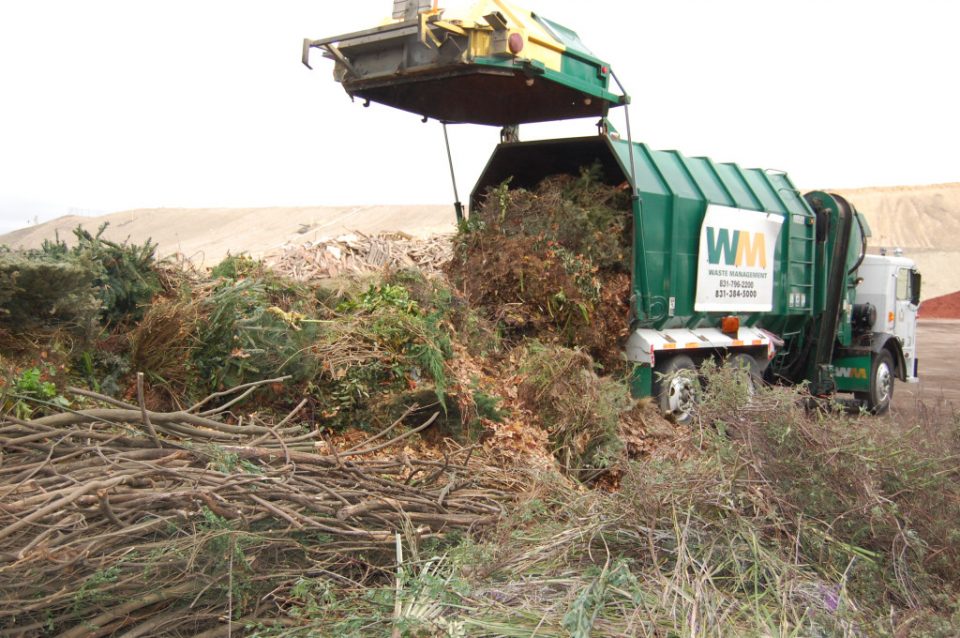 As California ratchets up its climate change initiatives, it is relying on local governments to enforce stringent policies aimed at removing recyclables and organic material — including yard clippings and food scraps — from the waste stream.

At the end of each day, active dumping sites in landfills must be covered to deter pests and odor and to keep litter from blowing away. State Assembly Bill 1594 came into effect on Jan. 1, stipulating that organics can no longer be used as cover in landfills, a more common practice in other parts of the state.

But the Monterey Regional District has never used green waste for daily cover. Instead, local landfills rely on retractable canvas tarps to fulfill this need.

“When it comes to organic, green waste, the district’s practice has been to find higher and better uses for it,” said Flanagan.

Green waste placed out on the curb is taken to an onsite composting facility at the Marina landfill that breaks it down into a rich, earthy resource.

Monterey and its surrounding counties benefit from a “ready-made market” of farmers, vineyards and orchards who buy the compost to supplement the soil that grows their crops and in turn provide new raw materials.

But Flanagan says that residents on the Peninsula can expect increases to their garbage bill “in the near future” based on two realities: the crash of the recycling market due to China’s refusal to accept most foreign waste and California’s Senate Bill 1383, a bill which seeks to eliminate 75% of organic materials from landfills by 2025 in an attempt to severely curb greenhouse gasses released as green waste decomposes.

“This is a once in a lifetime adjustment to a new normal,” Flanagan said. “Sitting here today in 2020, none of us really have an idea of how to get from here to there, but we’re going to be working on it over the next few years.”

Revenues from recycling have plummeted by more than 50%. In Monterey, that has led to a fee increase passed by the City Council in May. That increase, the first in five years, was requested by haulers who suddenly found themselves unable to pass along their recycling product. Rather than processing them at the Marina landfill, bales of recyclables must be stored as waste management districts throughout the country search for new markets.

As haulers grapple with these changes, Flanagan says it is likely that “most everyone is going to be charged a fee to process their recyclables.”

The state’s initiative, SB 1383, is tackling the role that organics play in global climate change. When green waste is thrown into a landfill, it breaks down under oxygen-poor conditions that produce methane, a greenhouse gas capable of warming the planet much more quickly than carbon dioxide. Composting introduces air into the mixture through regular turning, greatly reducing the amount of methane.

Ted Terrasas, the Sustainability Coordinator for the city of Monterey, calls SB 1383 “one of the most significant regulations in solid waste in the last 20 to 30 years,” in part because of the onus it places on local agencies to fund and enforce the new rules. They risk hefty fines if they fail to bring their customers into compliance.

Local officials are considering several strategies to address these changes.

Much of this work centers on public outreach, teaching residents and businesses how to source-sort their recycling and organics properly and keeping them up to date on changing regulations.

There may also soon be a push to incorporate food waste into green bins, a move that has been criticized by agricultural interests who feel that compost made with food scraps is of lesser quality. Certain certification programs such as the California Leafy Green Products Handler Marketing Agreement bar the use of compost made using food waste due to concerns over foodborne illness.

But food scraps were central to the installation of the state’s first anaerobic digester at the Marina landfill, a pilot project by the waste management district which concluded in September. The enclosed facility purposefully created oxygen-poor conditions so that the methane produced by decomposing green waste could be harvested for use in biofuel.

Flanagan says the district has plans to use biofuel to power its fleet of trucks on the Peninsula, allowing them to run on “carbon-negative, renewable natural gas.”

The pilot was successful, but local waste management agencies are facing a 10-fold increase in the amount of organic waste they can expect to process, from 7,000 tons per year up to 80,000 tons. They would need a much larger facility, compliant with local air and water requirements, that could cost as much as $50 million.

To meet the state’s strict goals and timelines, there is a consensus among those working in waste management that communities in California will need to rethink their role as passive producers of waste.

Gary Liss has been championing the zero waste lifestyle for decades, most recently as the vice president of Zero Waste USA. Having developed more zero waste plans than perhaps anyone in the country, Liss sees these changes as blessings in disguise.

“We have the opportunity to be more careful,” Liss said. “We need to stop wishful recycling, where we put things in the recycling bin and hope that they get recycled. And for organics, you’re essentially paying a convenience fee asking others to do it for you.”

Instead, Liss suggests businesses and homes alike minimize their use of single-use plastics and consider on-site composting that will minimize the cost to cities building new infrastructure.

But as a long-time California resident, Liss sees a clear line between the changes being asked by the state and peoples’ willingness to adapt.

“Every day I’m so thankful that I’m worth working in this world of zero waste where everyone is working to do the right thing,” Liss said. “I’m very hopeful, very optimistic, and it’s based on success.”