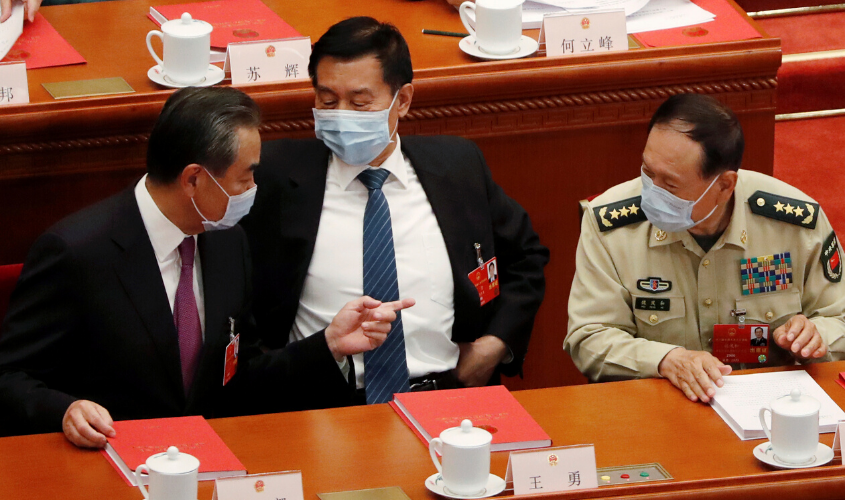 Exposed on the Taiwan issue, China sent its fleet to the Taiwan straits. But the move was meant primarily for its domestic audience.

As if battling a trade war with the United States was not enough, China’s vulnerabilities have increased also because of Covid-19, whose origins are believed to be from the L4 laboratory at the Institute of Virology on the outskirts of Wuhan, the capital city of Hubei province, where a large numberof manufacturing plants are located. The World Health Organization, which allegedly played a dubious role initially, probably didn’t release enough data on the infectious virus, even though Taiwan had warned it of the impending pandemic. WHO’s 62 members have demanded an impartial investigation to establish the origins of virus for further research in finding the right vaccine. In his opening remarks at the commencement of the WHO meeting by video conferencing, Chinese President and Secretary General of Communist Party of China (CPC), Xi Jinping said he would support the investigation after the pandemic ends. This exposed another of CPC’s vulnerabilities: after all, there is no forecast of a timeframe; the end of the pandemic is unlikely until the time everyone is immunized once a vaccine is invented. The suspicion gets compounded by China’s internal dynamics. At least two journalists, who were reporting live from Wuhan during the initial phase of the infection, have gone missing. Foreign journalists based in Beijing have been harassed to no end. Then a scientist, who retired from the L4 laboratory, has written and suggested to the scientists serving in the laboratory to quickly publish the nature of work they’re engaged in and even when criticised, they shouldn’t be scared. All this adds fuel to the fire when US-China relations are such that any further deterioration could lead to a conflict.

There has been a strong demand from many countries and US allies on restricting bilateral trade with China. Huawei’s 5G entry into the world is facing rough weather. The UK has announced revisiting its bilateral trade with and over reliance on China. During the initial days of the pandemic, China faced the wrath of European and other countriesdue to the substandard test kits, PPEs and F95 masks it supplied. All this impacted China’s reputation.

China has been exposed on the Taiwan front as well. Many countries have openly appreciated Taiwan’s handling of the Covid-19 pandemic—its quick communication to WHO and assistance rendered to many countries to mitigate the impact of the Wuhan virus. Recently, the US had authorized sale of F-16 air superiority interceptors to Taiwan. US and many other countries have openly voiced support for Taiwan’s entry into UN bodies like WHO, ICAO, IMO, etc., where Taiwan has made significant contributions. So possibly more for impact on its domestic audience, China sailed its fleet, including its lone aircraft carrier, Liaoning, to the Taiwan straits. But this wassuitably responded to by Taiwan’s Air Force and soon followed by US and Australian warships.

India’s stand on these issues has been well calibrated. India and Taiwan have good bilateral trade relations, projected to go up to approximately $22 billion by 2022. Their respective trade offices in Delhi and Taipei, are headed by very senior and capable diplomats who have ironed out many roadblocks to facilitate trade and commerce between the two partners. There are possibilities of some Taiwan owned manufacturing companies moving out of PRC, and India could be one of their destinations. Indian government has reviewed its policies to attract manufacturers of supply chain components. This was part of a broader policy of “Make in India”, which Prime Minister Narendra Modi has been proactive on. PRC has lurking suspicions about increasing bilateral trade between India and Taiwan. At WHO, India also supported independent investigation of the corona pandemic.

PM Modi has built a reputation for India of reaching out to many countries to tide over healthcare issues during the pandemic. The supply of hydroxychloroquine to many countries has led India to earn the title “pharmacy of the world”. Also, Indian manufacturers responded well during the initial days of the spread of coronavirus by manufacturing quality face masks, PPEs and ventilators to overcome dependence on the PRC. (China was battling the coronaviruscrisis and its Hubei province, where most manufacturing plants are located, was under complete lockdown.)

Even otherwise, China has been irked by the seemingly close India-US bilateral relations, the Indo-Pacific strategy and increasing activities of the Quad (US, Japan India and Australia). And this, in spite of PM Modi’s speech at Shangri La dialogue on 1 June 2019, in which he clearly mentioned that Indo Pacific was an all inclusive strategy and was not aimed at any country.

Later, Government of India issued a trade policy which requires any neighbouring country’s investment in India to be routed through the government. This was done in India’s own interest—to protect the stressed industries due to the lockdown. But the Chinese ambassador in Delhi reacted adversely by stating that it was aimed at PRC and could impact overall bilateral relations.

On 5/6 May this year, Chinese troops with their Indian counterparts at two locations on the northern borders—one in eastern Ladakh in the Galwan valley and the other one in Sikkim near Naku La pass. It resulted in minor injuries on both sides, but subsequently led to reinforcements. India’s Chief of Army Staff visited Ladakh on 22 May to review the security situation.

Around the same time, some Nepalese started protesting against India on the issue of the unresolved border at Kalapani. Later, the Nepal government passed a resolution and published a new map in which a number of locations in Indian territory were shown as Nepalese dominion. India’s Army Chief, during a seminar, when asked why Nepal had claimed ownership of the Kalapani area, said, without naming China, that it appeared to have been instigated by a third country. Nepal’s internal political dynamics is quite messy. PM K.P. Sharma Oli’s popularity has taken a beating and he is facing resignation demands from within his own party.

In the overall context, China has opened itself up on too many fronts, understandably to strengthen President Xi Jinping’s position prior to CCP’s National People’s Congress(a rubber stamp body of 250 representatives). He also has internal challenges such as China’s declining reputation in the world, centenary of the Communist Party in 2021, the full congress meeting in 2022, wherein a successor for a 10-year period is identified, etc. The world will watch closely whether, or not, President Xi Jinping will continue in his position—after all, he has declared himself to be President for life and has strengthened his position by asserting himself, by initiating the BRI and now imposing Chinese laws on Hong-Kong, which has been met with large scale opposition from citizens of Hong Kong and has elicited a warning from the US since it violates the agreement on the one nation two systems. China has opened too many fronts in a short time, and the smoke emitting from there is unlikely to subside soon and will adversely impact China’s trustworthiness as far as following the Rule of the Law is concerned. This is undesirable for a budding superpower.

Indian foreign policy remains committed to one China when it comes to Taiwan. The Ministry of External Affairs maintains strict discipline on Hong Kong and Xinjiang. India has a number of consulates in China (including one in Hong Kong) on the basis of reciprocity. Has the time come to elevate India’s trade office in Taipei to a consulate, given the increasing volumes of trade between the two partners and increasing connectivity? Post Covid, Taiwan’s investments in India are poised for increment and people to people exchange would increase due to trade, commerce, education, etc. There is already a mechanism of exchange visits between Parliamentarians of India and Taiwan. To have a consulate in Taipei doesn’t violate India’s One China policy since there are a number of Indian consulates in various cities of China. This could facilitate stronger economic ties and movement of people between the two democratic partners.

As parts of Karnataka record drop in rainfall, experts warn that deforestation must be halted