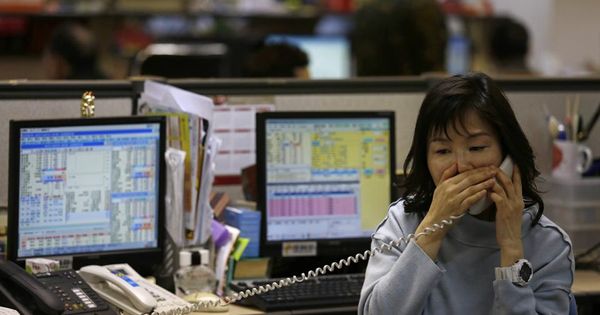 Is the People’s Bank of China (PBoC) getting bearish?

On one hand, it is just doing what it always does: tracks the Fed. If the Fed cuts, they at least consider cutting. If the Fed hikes, they hike.

On the other hand, they are looking at a deteriorating situation in Hong Kong, a stalemate in trade talks going nowhere fast, and a slowing economy.

The PBoC cut the 7-day repo lending rate by 25 basis points to 2.50% on Monday, which was significant because it was the first cut since 2015. Hong Kong and mainland China equities rose again on Tuesday morning.

The Shanghai Composite was up nearly 1% with Hang Seng up 1.5% near closing time.

Yesterday’s cut was no surprise. China’s industrial production and retail sales data both show the Chinese economy in retreat after years of runaway growth. Some of this has to do with structural changes, such as a shift to a more stable, slower growth consumer economy. Others point to uncertainties from the trade war.

China has had to bail-out at least five mid-sized banks, with the latest being Harbin Bank on Friday due to bad loans. Chinese bank deposits amount to $27 trillion, double the total amount of U.S. commercial bank deposits.

Both monetary and fiscal stimulus in the past 12-18 months has been cautious so as not to exacerbate corporate debt levels. The lack of stimulus has disappointed international investors who are now giving up on China opening the flood gates to credit.

The Institute of International Finance recently reported that global debt has now hit $250 trillion, or 320% of global GDP, with corporate leverage being the largest component, about $75 trillion, and led by the the world’s top two economies.

If the Fed cuts further, which the market is expecting despite a general slowdown in the U.S. economy, China will likely lower rates again.

The next Fed meeting is December 11.

Student activists have been firing back at police with bows and arrows following the death of some protesters in recent weeks. Police have barricaded students inside the Polytechnic University campus, another bad look for Hong Kong authorities and China.

Everyone is getting impatient – the student activists who want protesters released from prison, along with some four other demands – Hong Kong leader Carrie Lam, and Beijing.

One student union leader, speaking to Euronews on Tuesday, said that Hong Kong risks a “Tiananmen Square moment” – a phrase authorities may very well see as a challenge to their attempts at putting an end to these months-long anti-government activities.

It is unclear whether or not Hong Kong can meet all five of the protesters demands, because one of them asks for “universal suffrage” and therefore greater autonomy from China, a move Beijing is sure to reject. Universal suffrage would allow for people to vote for their leaders.

Hong Kong is slated to become a full part of China by 2047. If Hong Kong granted that right now, they would be taking it away within a generation unless China agrees to keep the One Country, Two Systems policy in place forever.

In a sign that patience is wearing thin, the South China Morning Post, hardly a mouthpiece of the Chinese Communist Party, wrote in an op-ed by deputy executive editor Zuraidah Ibrahim that the students were acting like “hardcore mobs.”

Police have warned that the city was on the verge of a total breakdown.

In the north, student protesters occupying Chinese University took over the Tolo Highway. At Polytechnic University, they shut down the Cross-Harbour Tunnel for five days, the longest forced closure ever. Students broke into the campuses’ chemical laboratories and set up petrol bomb making centers overnight and launched them with catapults and arrows against police, according to the SCMP.

While this is not a negative for mainland China’s economy, per se, it is a massive headwind for political risk.

The U.S. Senate is looking to sanction Hong Kong, which could upend its decades old special status with Washington, threatening the Hong Kong dollar and China’s ability to use Hong Kong as a backdoor into the U.S. at much lower tariffs.

China’s stock market is still one of the best performers in the world, suggesting the market is not considering this risk as a base case scenario at this time.

Last week, the People’s Liberation Army of China took to the streets with brooms and trucks to clean up busted barricades and trash; as did volunteers – notes Ibrahim – who are “fed-up with the violence and their pockmarked streets. We still don’t see an end in sight.”

How Trump and Congress Can Fight the Virus