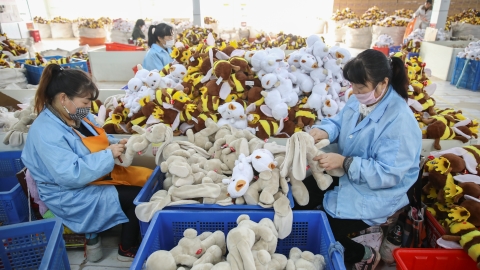 China’s producer prices continued to fall in October but the decline kept unchanged from the previous month amid a recovery in industrial activities, official data showed on Tuesday.

China’s producer price index, which measures costs for goods at the factory gate, fell 2.1 percent year on year in October, unchanged from the drop in September, the National Bureau of Statistics said.

Affected by downward international prices of crude oil, the sub-index for the oil and gas extraction industry went down 4.9 percent from the previous month, NBS senior statistician Dong Lijuan said.

With increasing demand for winter heating in northern China, the PPI for coal mining as well as gas production and supply sectors rose 2.1 percent and 0.4 percent month on month, respectively.

In the January-October period, the PPI declined 2 percent on average year on year, according to the NBS data.

The PPI data came along with the release of the consumer price index, which showed consumer inflation rose 0.5 percent year on year in October, moderating from the 1.7-percent rise registered in September.