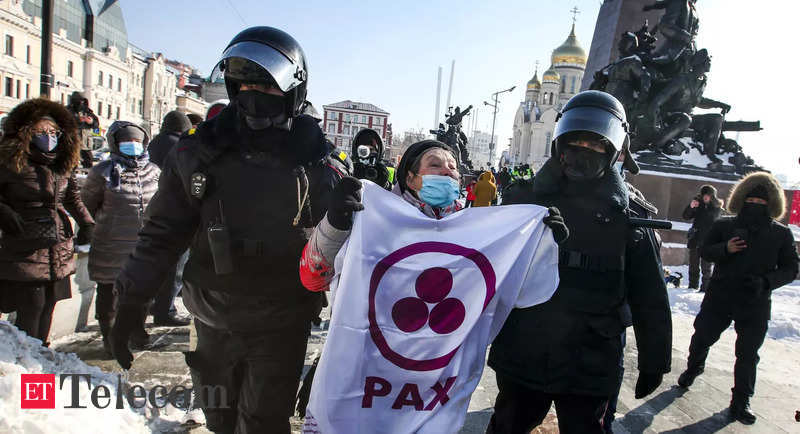 She wrote: “Foreign platforms in Russia must be shut down.”

Her choice of social network for sending that message: Twitter.

While the Kremlin fears an open internet shaped by American companies, it just can’t quit it.

Russia’s winter of discontent, waves of nationwide protests set off by the return of opposition leader Alexei Navalny, has been enabled by the country’s free and open internet. The state controls the television airwaves, but online Navalny’s dramatic arrest upon arrival in Moscow, his investigation into President Vladimir Putin’s purported secret palace and his supporters’ calls for protest were all broadcast to an audience of many millions.

For years, the Russian government has been putting in place the technological and legal infrastructure to clamp down on freedom of speech online, leading to frequent predictions that the country could be heading toward internet censorship akin to China’s great firewall.

But even as Putin faced the biggest protests in years last month, his government appeared unwilling — and, to some degree, unable — to block websites or take other drastic measures to limit the spread of digital dissent.

The hesitation has underscored the challenge Putin faces as he tries to blunt the political implications of cheap high-speed internet access reaching into the remote corners of the vast country while avoiding angering a populace that has fallen in love with Instagram, YouTube, Twitter and TikTok.

“They’re afraid,” Dmitri Galushko, a Moscow telecommunications consultant, said of why the Kremlin hasn’t clamped down harder. “They’ve got all these weapons, but they don’t know how to use them.”

More broadly, the question of how to deal with the internet lays bare a dilemma for Putin’s Russia: whether to raise state repression to new heights and risk a public backlash or continue trying to manage public discontent by maintaining some semblance of an open society.

In China, government control went hand in hand with the internet’s early development. But in Russia, home to a Soviet legacy of an enormous pool of engineering talent, digital entrepreneurship bloomed freely for two decades, until Putin started trying to restrain online speech after the anti-government protests of 2011 and 2012.

At that point, the open internet was so entrenched in business and society — and its architecture so decentralized — that it was too late to radically change course. But efforts to censor the web, as well as requirements that internet providers install equipment for government surveillance and control, gained pace in bill after bill passed by parliament. At the same time, internet access continues to expand, thanks in part to government support.

Russian officials now say that they have the technology in place to allow for a “sovereign RuNet” — a network that would continue to give Russians access to Russian websites even if the country were cut off from the World Wide Web. The official line is that this expensive infrastructure offers protection in case nefarious Western forces try to cut Russia’s communications links. But activists say it is actually meant to give the Kremlin the option to cut some or all of Russia off from the world.

“In principle, it will be possible to restore or enable the autonomous functioning of the Russian segment of the web,” Dmitry Medvedev, the vice chairman of Putin’s Security Council and a former prime minister, told reporters recently. “Technologically, everything is ready for this.”

Amid this year’s domestic unrest, Russia’s saber-rattling directed at Silicon Valley has reached a new intensity. Navalny has made expert use of Google’s YouTube, Facebook’s Instagram and Twitter to reach tens of millions of Russians with his meme-ready depictions of official corruption, down to the $850 toilet brush he claimed to have identified at a property used by Putin.

At the same time, Russia has appeared powerless trying to stop those companies from blocking pro-Kremlin accounts or forcing them to take down pro-Navalny content. (Navalny’s voice is resonating on social media even with him behind bars: On Saturday, a court upheld his prison sentence of more than two years.)

Russia’s telecommunications regulator, Roskomnadzor, has taken to publicly berating American internet companies, sometimes multiple times a day. On Wednesday, the regulator said that the voice-chat social network Clubhouse had violated “the rights of citizens to access information and to distribute it freely” by suspending the account of a prominent state television host, Vladimir Solovyov. On Jan. 29, it claimed that Google was blocking YouTube videos containing the Russian national anthem, calling it “flagrant and unacceptable rudeness directed at all citizens of our country.”

Clubhouse apparently blocked Solovyov’s account because of user complaints, while Google said some videos containing the Russian anthem had been blocked in error because of a content rights issue. Clubhouse did not respond to a request for comment.

For all its criticism of American social media companies, the Kremlin has used them extensively to spread its message around the world. It was Facebook that served as a primary tool in Russia’s effort to sway the 2016 United States presidential election. On YouTube, the state-controlled network RT has a combined 14 million subscribers for its English, Spanish and Arabic-language channels.

Simonyan, the editor of RT, says she will continue to use American social media platforms as long as they are not banned.

“To quit using these platforms while everyone else is using them is to capitulate to the adversary,” she said in a statement to The New York Times. “To ban them for everyone is to vanquish said adversary.”

A law signed by Putin in December gives his government new powers to block or restrict access to social networks, but it has yet to use them. When regulators tried to block access to the messaging app Telegram starting in 2018, the two-year effort ended in failure after Telegram found ways around the restrictions.

Instead, officials are trying to lure Russians onto social networks like VKontakte that are closely tied to the government. Gazprom Media, a subsidiary of the state-owned natural gas giant, has promised to turn its long-moribund video platform RuTube into a competitor to YouTube. And in December it said it had bought an app modeled on TikTok called “Ya Molodets” — Russian for “I’m great” — for sharing short smartphone videos.

Andrei Soldatov, a journalist who has co-written a book on the Kremlin’s efforts to control the internet, says the strategy of persuading people to use Russian platforms is a way to keep dissent from going viral at moments of crisis. As of April 1, all smartphones sold in Russia will be required to come preloaded with 16 Russian-made apps, including three social networks and an answer to Apple’s Siri voice assistant that is called Marusya.

“The goal is for the typical Russian user to live in a bubble of Russian apps,” Soldatov said. “Potentially, it could be rather effective.”

Even more effective, some activists say, is the acceleration of Putin’s machine of selective repression. A new law makes online libel punishable by up to five years in prison, and the editor of a popular news website served 15 days in jail for retweeting a joke that included a reference to a January pro-Navalny protest.

In a widely circulated video from this month, a SWAT team in the Pacific port city of Vladivostok can be seen interrogating Gennady Shulga, a local video blogger who covered the protests. An officer in a helmet, goggles and combat fatigues presses Shulga shirtless to a tile floor next to two pet-food bowls.

“The Kremlin is very much losing the information race,” said Sarkis Darbinyan, an internet freedom activist. “Self-censorship and fear — that’s what we’re heading toward.”

Gov. Abbott to Give Update on Water Distribution Across Texas – NBC 5 Dallas-Fort Worth

Is It Too Late to Buy Coupa Software?