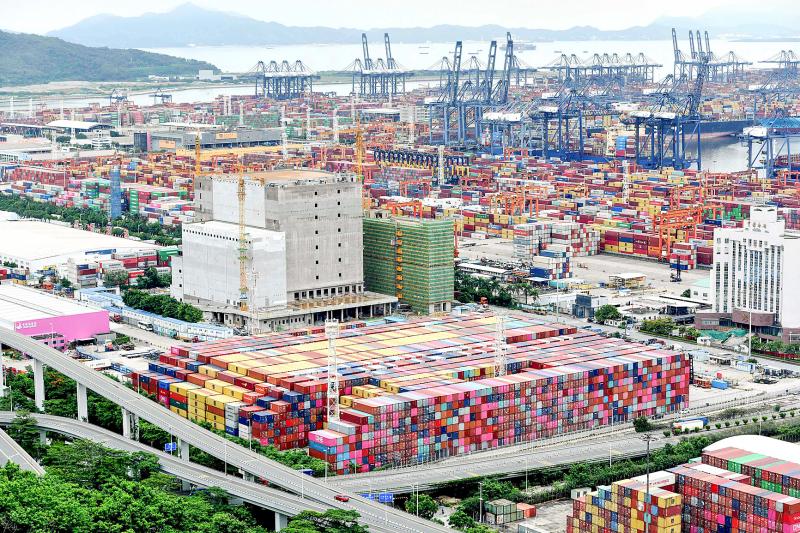 SOARING REVENUE:
Shipping firms such as Cosco are reaping record profits from supply-chain problems and clogged ports, allowing them to dole out massive rewards

Asian shipping companies are offering mega bonuses to employees amid a boom in freight rates, with China’s state-owned giant Cosco Shipping Holdings Co (中遠海運控股) doling out as much as 60 percent of a manager’s annual salary, the Caixin Global news service reported.

Other shippers are also distributing generous rewards. A worker at Taiwan’s Evergreen Marine Corp (長榮海運) received a year-end bonus that was nearly 40 times their monthly salary, it said.

The spot rate for a 40-foot container to the US from Asia topped US$20,000 last year, including surcharges and premiums, up from less than US$2,000 a few years ago.

Meanwhile, containers are stacking up at the already backed-up Shenzhen port in China as congestion in the US and Europe ripples back to Asia, delaying ships picking up goods from the manufacturing and technology hub.

Manufacturers in southern China are making a last push to ship goods before the Lunar New Year holiday later this week, with the People’s Daily last week reporting that trucked volumes into Shenzhen’s Yantian terminal on Jan. 13 were about 30 percent above last month’s levels. Those goods are stacking up as ships coming to carry them have in turn been delayed by congestion in the US and Europe.

Ships arriving at the Yantian terminal have been delayed by an average seven days, and the number of ships arriving from Europe and the US has fallen more than 40 percent in the past two weeks, the terminal said in a customer advisory on Wednesday.

That comes on top of the problems the Port of Shenzhen was already facing, with a COVID-19 outbreak earlier this month leading to lockdowns of districts, testing of workers and trucking delays at the Yantian and Shekou container terminals.

The congestion has prompted the Yantian terminal to restrict acceptance of containers. From Friday, full containers can only be trucked in four days before vessels are due to berth, the operator said.

The congested ports and Lunar New Year holiday are likely to further slow shipments to the US and elsewhere, adding to already high inflation pressures. The price of US imports from China was at the highest level for more than six years last month.

“Delivery times lengthened significantly in 2021, and January 2022 began with many companies reporting severely constrained output, input costs rising faster than at any point in the decade prior to the pandemic, and Omicron causing fresh uncertainty,” IHS Markit Ltd chief business economist Chris Williamson said in a report.

Ports globally are grappling with congestion as the pandemic heads into its third year, piling further pressure on supply chains affected by shortages of workers as the Omicron variant of SARS-CoV-2 spreads.

New cases of the Omicron variant have burdened the logistics workforce at US west coast ports such as Los Angeles and Long Beach, said Judah Levine, the head of research at digital freight-forwarder Freightos.

That has worsened existing shipping delays and cancellation of voyages that predated the new virus strain, he said.

Shipping masks and thermometers to Singapore? You now have to declare them – here’s how to do it, Business Insider

3 Questions Of Risk And Communication In A Time Of Coronavirus