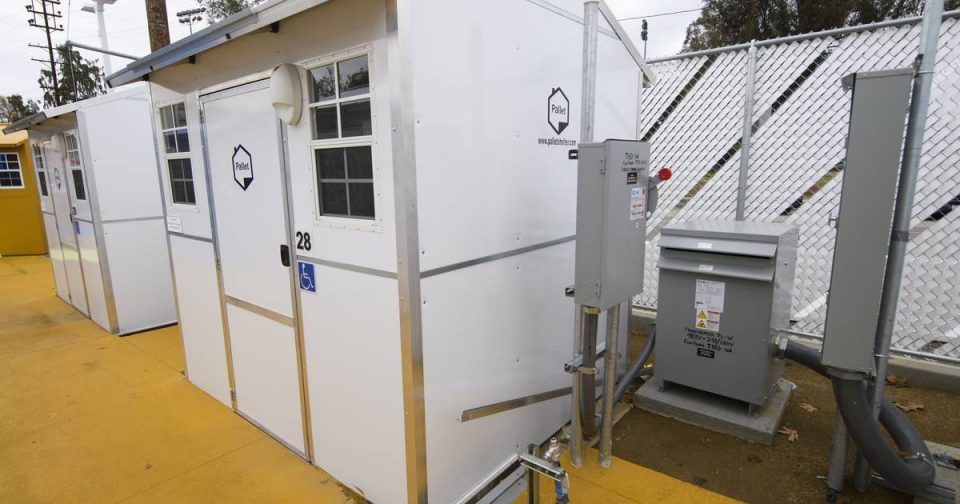 As we know, New York City shelters are overwhelmed, not only by the city’s own unhoused population but by thousands of asylum seekers arriving unexpectedly in our town. These new residents, like the rest of those in our shelters, need four walls and a roof, food and the opportunity to ultimately find employment. Fortunately, New Yorkers have a secret weapon: our more than 10,000 vacant lots, and the ability to quickly erect small, secure, inexpensive dwellings called pallet homes.

The combination can rescue some of the most desperate members of our society.

Over the decades, we’ve looked to innovative answers to solve the city’s housing crunch. In the 1990s, in collaboration with city leaders, housing professionals and businesses — including Pfizer, where I was an executive — I participated in an initiative to renovate hundreds of apartments in former abandoned Brooklyn buildings which later became residences for the poor.

Tent housing, like the structures Mayor Adams has erected on Randalls Island, are another option. As a former Army officer in the Corps of Engineers, I know that tent shelters often lack durability in extreme weather conditions and rarely provide individual privacy for those seeking new directions in their lives.

That’s where pallet homes come in. These structures consist of aluminum frames, fiberboard composite insulated walls, air conditioning and heating, furniture, and individual door locks. Pre-fabricated, they can be assembled in hours, do not require foundations and can sustain heavy winds and large snowfalls. And they can be easily assembled into communities of many different sizes and shapes, depending on the needs of the city and of individual communities.

The base pallet home is a very small but private one-level structure ideal for single persons. Larger units are suitable for small families. Shower and toilet facilities are provided in accompanying wheeled vehicles, which also offer laundry. Water is supplied to these in portable tanks, electricity provided by generator, and liquid and solid wastes removed by truck.

Nor are these depressing shantytowns. They look dignified, and pallet community property is often attractively landscaped.

Security of a pallet home community is critical, which is why a small community typically includes perimeter fencing, security cameras, metal detectors and emergency communications. Entrance to the community is controlled 24 hours by an armed security guard. Weapons and drugs are forbidden. There’s a curfew, precluding entry and exit after a set time. An on-site supervisor responsible to supporting city agencies would manage the activities of any created community.

Catch up on the day’s top five stories every weekday afternoon.

The model is working in other places, including in Redondo Beach, Calif., south of Los Angeles. After studying this model, I have conceptually designed a prototype community to accommodate 100 residents, incorporating all of the requirements indicated above.

What would it cost? To construct a pallet home community suitable to house 100 individuals — including the homes themselves, portable bathing facilities, utility equipment, security systems and related apparatus — I estimate between $500,000 and $650,000. It could be erected in approximately 30 days. Compare that amount to the many millions spent on putting homeless people in hotel rooms and shelters, and it begins to look like a wise investment, or at least something worth trying.

No one is suggesting that people live in perpetuity in such tiny homes. The purpose of a pallet home community would be to serve as a “halfway” residency for its occupants. Stays in the community would be limited to a set number of months, or a maximum of two years. Residents would, unless disabled, be required to actively seek jobs and weekly job bank postings would be provided to residents. They would be encouraged to save their earnings.

After considering the likely expenses to maintain and secure such a community, provide utilities including water and electricity, dispose of liquid and solid wastes. etc., my back-of-the-envelope estimate of the cost works out to approximately $300,000 per year — or about $9 per day per resident per day.

There are of course various uncertainties in this proposal including community approvals, overcoming zoning restrictions, and quickly obtaining the capital funds to conduct a trial 100-unit community. But the benefits of a successful outcome are many. I ask Mayor Adams and community leaders to rally around this safe, inexpensive and innovative weapon for providing shelter for our newest citizens. What do we have to lose?

Rising to meet the needs not only of recent migrants but of thousands of people who cannot afford shelter demands aggressive innovation. Deploying pallet homes in a daring way on vacant city properties can distinguish New York City from the rest of the nation.

Veteran sentenced for stealing more than $2.5 million from Navy warehouse