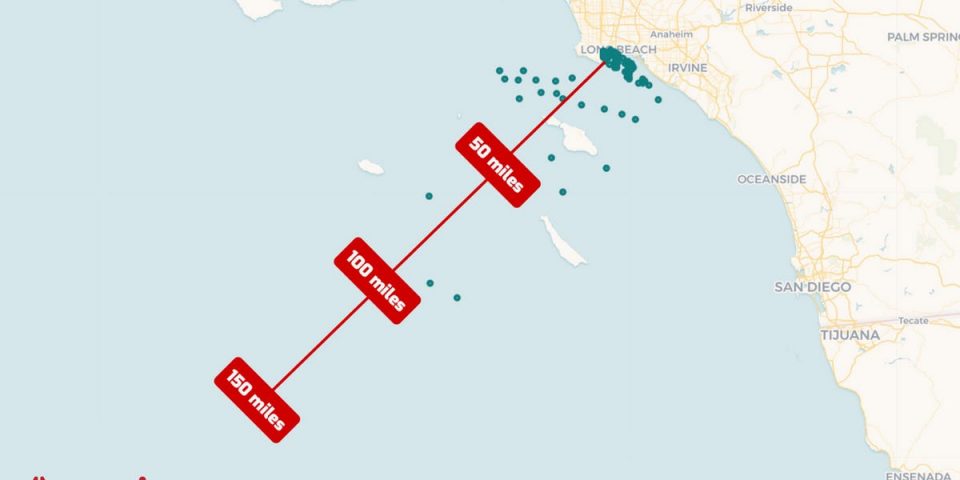 We are so sorry! We bumped into a system failure and couldn’t take your email this time.

Thank you for signing up!

Cargo ships queues for the nation’s largest ports were pushed over 100 miles further out to sea this week, as a part of a bid to improve air quality and safety along the California coast.

Over 100 ships, which have been waiting to dock in Los Angeles and Long Beach for as long as 2 months, will now wait about 150 miles outside of the port, or seven times further away from the coast than previously, according to a new policy from the Pacific Merchant Shipping Association, the Pacific Maritime Association, and the Marine Exchange of Southern California.

“Certainly moving those ships farther offshore will have the effect of diluting emissions before they reach the coastline,” Michael Kleeman, a civil and environmental engineering professor at the University of California Davis, told Insider. “This will offset the effects that idling ships could have on air quality.”

Los Angeles has been plagued with hazy skies and poor air quality that some speculate could be caused in part by the crowds of idling ships, and Kleeman said the new policy may help clear the Los Angeles skies if idling ships are in fact causing the haze.

The new policy went into effect on Wednesday. The day before, the port backlog broke another record. 179 ships were recorded at the locations — the majority of which are waiting to dock and unload.

Satellite data from Spire Global shows how the new guidelines will push the traffic jam much further out to sea. Previous standard allowed the ships to lurk around 23 miles outside of the ports.

The maritime groups said in the announcement that the new process will reduce safety hazards by allowing the vessels to slow their speed and spread out, as well as reduce emissions near the coastline.

The environmental hazards poised by the port backlogs have been under increased scrutiny in recent months. In October, a major oil pipeline leak in Southern California waters devastated local wildlife and caused several nearby beaches to temporarily close. Following the incident, investigators said they believe the leak was likely caused by a cargo ship’s anchor.

“Any time you burn fuel you’re going to have pollution resulting from that,” Kleeman said. “All particulate matter in the atmosphere from the burning of fossil fuels is harmful.”

‘I’ve Got a Golden Ticket’: Charlie and the Chocolate Factory musical comes to San Antonio Dec. 7-12 | Things to Do | San Antonio