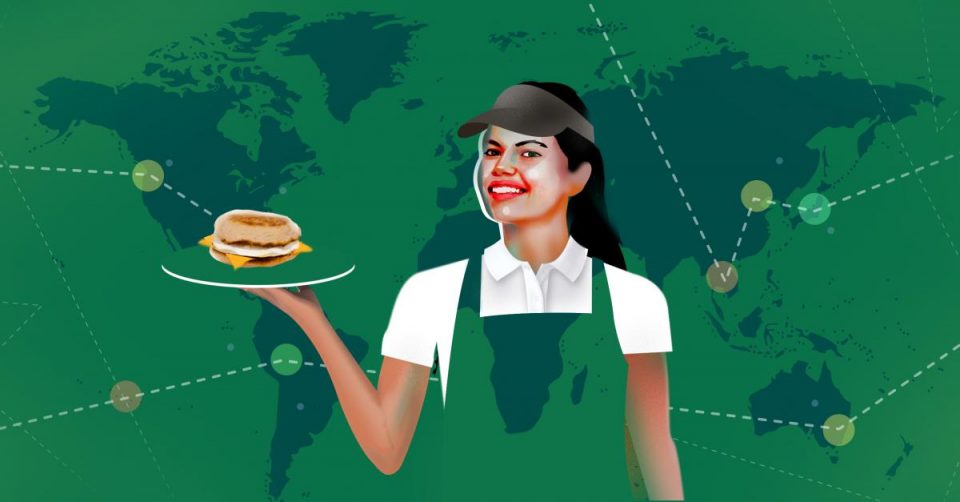 Against the backdrop of jazzy Christmas music, two Starbucks delivery drivers navigate New York City on a snowy day, finding parking for their truck, wheeling carts of boxes into stores, going through security at Trump Tower, and trying to fit a large delivery of supplies into a small refrigerator.

The corporate video offers a behind-the-scenes look at how your eggnog latte or protein bistro box gets to the store. For Jacquelyn Howard, vice president of food supply chain and sourcing at Starbucks, it reminds her of her mission.

Howard has specialized in finding solutions to tricky problems and managing complicated systems over her 30-year career, including 20 years working at McDonalds, where her roles included strategic assessment team lead for supply chain management. She joined Starbucks in 2017.

Here are some takeaways from her career.

Working at Starbucks meant tackling the food supply chain at a company that focuses on coffee. Starbucks stores don’t even have kitchens, Howard pointed out.

“Starbucks is a coffee culture,” Howard said. “When we talk about food I have to educate people that there are differences between food and coffee.”

Compared to coffee, food is highly perishable, comes with increased health safety concerns, and has a lower profit margin. And while drinks are made by baristas, Starbucks’ sandwiches, salads, yogurt parfaits, and pastries are assembled off-site and shipped to stores.

Howard said her move to Starbucks required an education on her part.

“I’ve never worked in an environment where we have assemblers,” she said. “I had to go out and learn that part of the business.”

For example, she had just visited assembly facilities to make sure she understood how they were operating and that safety provisions and worker protections were being followed. She also shared her food supply chain knowledge with her more coffee-focused colleagues.

Howard took on challenges at McDonalds, too, including spending three years as vice president for supply chain management in China, which had a completely different regulatory system.

“That was hard, a lot of character-building lessons there,” she said. “I came out stronger and more formidable than I would have ever been if I hadn’t gone to work in a different environment.”

Change up your perspective

Early in her career Howard was a salesperson and marketing influencer at DuPont. Working in supply chain, she flipped to the other side of the table.

“I became the one buying,” she said. “I was more empathetic and understanding, especially on manufacturing, about what it takes to make things real.”

Instead of having a particular focus on one area of the supply chain, Howard said she was willing to take on any experience or learning opportunities. One of her accomplishments at McDonalds was transitioning from frozen to fresh beef patties for Quarter Pounders.

“I worked on the assessment as to how and when and how much it would take to get fresh beef from a 50-year process of having frozen beef patties in their restaurants,” she said. “We did the assessment with their suppliers, with the industry … it was a lot of work.”

The initiative was a success, and today Quarter Pounders are made with fresh beef.

Her guiding principles for her career, she said, include never saying no, always finding a solution, and “just being open to change and being thoughtful about my learning journey.”

Don’t be afraid to hit pause and rebrand

Howard left McDonalds in 2016, and took almost a year off before she moved with her family to Seattle to join Starbucks.

“I really had to take my time back,” she said.

Working for a global company meant always being “on” and getting messaged at all hours.

“With the supply chain, anything can go wrong. Restaurants are always open, the supply chain has to run. It’s a miracle every day, but a shoe can drop constantly,” she said.

During her hiatus Howard spent time with her mother in Ohio, read and went to lectures, and took up tennis and piano. By the time she started at Starbucks, she said, she had rebranded herself, in a sense, after her long tenure at McDonalds, and had fallen in love with another company.

“I tell people, before you start a job, please, take off at least a month,” Howard said.

Howard takes the time to learn about every part of the supply chain, she said. At McDonalds, she went to farms and learned about potato farming and produce.

At Starbucks she visits facilities where food is prepared, and as part of her training she worked at a store in Toronto to gain experience on the ground.

“I learned how to craft several beverages, but most importantly I learned how it is to work as a store manager,” she said. “I do a mean Flat White. That is my favorite [beverage], but it’s hard. People do have really complicated orders.”

Whether she is dealing with tough logistics or food safety, Howard said she’s thinking about the supply chain from where food is grown in California to baristas in stores.

“People call themselves foodies,” she said. “I’m a real foodie. I know where it comes from.”

A Historic Zycus Horizon in the Historic City of Charleston

This 100X.VC-backed startup plans to disrupt the food supply chain with ‘vertical delivery’ and data science

How Apple uses its supply chain as a weapon

Supporting communities through our supply chain