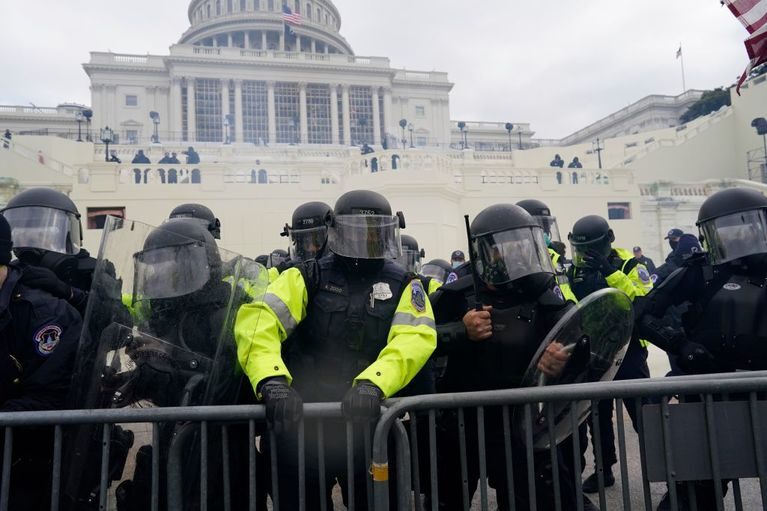 The early new year resilience being shown by equity markets in this first week of 2021 owes more to expectations of a bigger then expected fiscal response from the US as the prospects of a Democrat takeover of the Senate increase, than any concerns about the global economic outlook. The shocking events on Capitol Hill appear thus far to have been taken in their stride, showing once and for all that global investors care more for monetary and fiscal stimulus than they do about political unrest, wherever it may be.

The Dow Jones and S&P500 both hit new record highs, while markets in Asia also managed to hold their own, with the Nikkei also notching another 30-year peak.

Last nights Fed minutes were rather overshadowed by events on Capitol Hill, however there was little in the way of surprises, with all participants backing the current outcome-based approach, with most officials seeing inflation and economic output risks tilted towards the downside.

Bond markets appear to be taking a slightly longer-term view on inflation risk, with a sharp rise in longer term yields and a sharp steepening of the curve as 10-year yields rise well above 1% to 1.05% and their best levels since March last year, with the spread between the 10- and 2-year yield hitting its widest level in over 3 years. US forward 5Y/5Y inflation expectations have also risen to their highest levels in over 2 years, speaking to a wider concern that all of this easy money on the fiscal and monetary front will have a significant inflationary impact as we head further into the decade.

Market indifference to events in the US has extended once again into a sharp rise in European stocks this morning with the FTSE100 moving above the 6,900 level for the first time since February last year, as the UK index continues to play catch-up to its European peers.

Basic resource stocks have continued to outperform on the back of firmer iron ore and copper prices with BHP and Rio Tinto higher on the day.

Banking stocks are underperforming in early trade this morning despite the gains this week brought about by the steepening in the US yield curve, and the prospect that dividends might well resume. On the dividend front this could yet prove to be premature given the economic risks ahead with respect to a rise in non-performing loans as the economic lockdowns extend into Q2 this year, and UK gilt yields do appear to reflect those risks.

On the companies front Sainsbury this morning followed in the footsteps of Morrisons early this week by announcing a similarly positive increase in Christmas like for like sales of 9.3%. recording their best ever Christmas trading performance. On a quarterly basis this translated into an 8.6% rise in Q3, with total retail sales showing an increase of 6.8%.

Grocery sales rose 7.4% with a 128% increase in online grocery sales. CEO Simon Roberts said that profits for the year were expected to come in at £330m after returning the £410m in business rates relief. This compares to £586m in the previous fiscal year.

Also, on the retail front discount retailer B&M European Retail announced group revenue growth of 22.5% with UK stores seeing a 26.6% rise in revenues and a 21.1% rise in like for like sales. The business appears to have leveraged its role as an essential retailer well during the lockdowns with management creating 500 new jobs and opening 18 new UK stores during Q3. The company also announced another special dividend of 20p per share.

Entain, formerly GVC Holdings also announced that its was making a £250m offer for Enlabs AB in Sweden as it looks to expand further into new markets.

The economic woe looks set to continue for the hospitality sector with All Bar One owner Mitchell and Butlers announcing a 67.1% fall in Q1 total sales. The group currently has cash balances of £125m, with all facilities drawn, and no sites trading. Monthly cash burn is running at just over £1m a day at £35m to £40m a month.

From these numbers, it is abundantly clear that more government help will be needed, given that any sort of lifting of restrictions is unlikely to happen much before the middle of the year, way too late for many in this sector. With the next quarter debt service due on 15th March, Mitchells is likely to be operating at the limits of its facilities by then. It is therefore not surprising that management have said that they are looking at measures to raise extra capital, however no decision has yet been taken on how this might be done. Investors don’t appear to be waiting to find out, with the shares sharply lower in early trade, over concerns about a dilution to their stakes.

Airline shares are lower after Ryanair cut its annual traffic forecasts from below 35m passengers to between 26m and 30m in light of the new lockdown restrictions on travel, both internal and overseas, with EasyJet shares amongst the biggest decliners

Oil prices have also continued to benefit from this week’s surprise 1m cut in February output by the Saudis, however one can’t help feel that markets are getting slightly ahead of themselves given that various lockdown restrictions are likely to temper demand for oil products. As if to emphasise that very point US gasoline inventories rose sharply yesterday by 4.5m barrels.

The US dollar is seeing a modest rebound in early trade this morning but still looks soft, just above 33-month lows. More downside still seems the most probable outcome in the near term with the Euro set for a move towards 1.2500 and the pound set for a retest of $1.4000.

US markets also look set to shrug off the political unrest in the US with another record open, with the focus set to be on the latest weekly jobless claim’s numbers after yesterday’s surprise decline in ADP payrolls of -123k.

Expectations are for claims to rise to 800k, up from last week’s surprise fall to 787k. At the beginning of December, we saw a sharp rise to 885k, and there is a concern that this turnaround could well be the beginning of a reversal back towards levels close to 1m in the weeks ahead. All eyes will be on tomorrow’s US payrolls report with some concern that, like ADP we could see a fall into negative territory.

On the plus side a bad number merely serves to reinforce market expectations of a bigger US government response once Biden takes up the Presidency and is able to stamp his mark on both Houses now that the Democrats have the casting vote on the Senate.

Last year also saw the best performance for renewable stocks, particularly solar power, and with the Senate now likely to fall to the Democrats these gains are likely to continue. We saw big gains for SunPower, while the CMC Markets Renewable Energy basket hit a new high, rising above its 2019 peaks. Tesla shares also saw decent gains, making new record highs and moving closer to $800 a share.

Supply chain safety should be responsibility of shippers – TT Club

From waste to resource | Inquirer Opinion

Ben Franklin to Invest $114,500 in the Regional Economy

Statewide changes to vaccine distribution could be coming