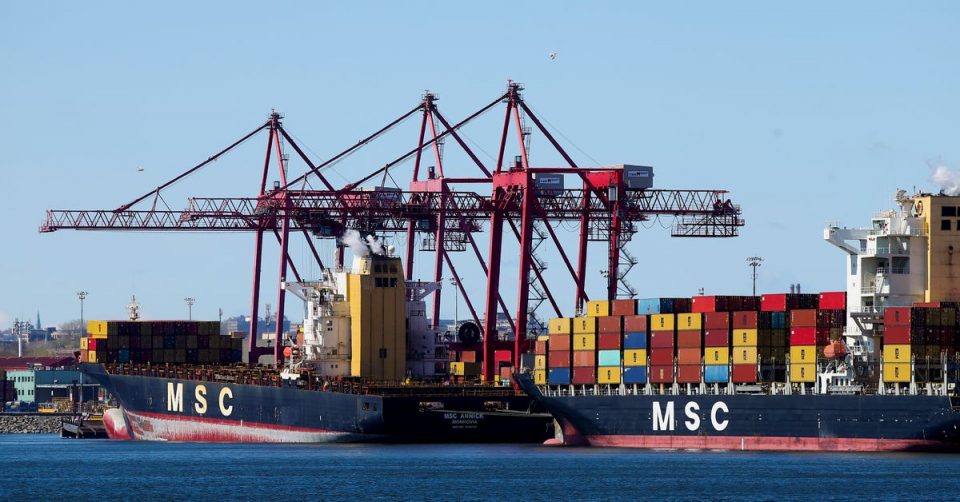 Cargo ships with their shipping containers are seen in the Port of Montreal in Montreal, Quebec, Canada, May 6, 2021. REUTERS/Christinne Muschi/File Photo

TORONTO, March 1 (Reuters) – Canada ratcheted up pressure on Russia on Tuesday for its invasion of Ukraine by shutting ports to Russian-owned ships and saying that holdings of all Russian oligarchs and companies in the country are under review.

Earlier, Transport Minister Omar Alghabra said that while the number of Russian ships entering Canadian waters and ports is “small,” there will still be an impact, especially with other countries doing the same.

Russia represents less than 2% of Port of Montreal’s annual containerized volumes, and the ban will have little commercial impact, a port spokesperson said.

Port of Vancouver, Canada’s busiest, said the number of Russian-flagged vessels calling there is minimal. In the past, those have traded in crude oil, canola oil and copper concentrates, a spokesperson said.

Canada is tracking three Russian-flagged vessels off the East Coast, one of which is a cargo vessel, a government official told Reuters.

Canada is also scrutinizing holdings of all Russian oligarchs and Russian companies in the country, Finance Minister Chrystia Freeland told reporters on Tuesday. “We are reviewing them and everything is on the table,” she added.

Canada imported C$2.14 billion ($1.68 billion) worth of goods from Russia in 2021, Statistics Canada data showed, with metals and minerals among the most valuable categories. It imported C$289 million worth of Russian energy products last year, according to the agency.

Reporting by Alexander Schummer in Toronto; Additional reporting by Allison Lampert in Montreal and Julie Gordon and Steve Scherer in Ottawa and Rod Nickel in Winnipeg
Writing by Denny Thomas; Editing by Jonathan Oatis, Grant McCool and Sandra Maler

Factory cattle supply to rise due to farm cost pressures

With Lidl Becoming A Shipowner, Should We Invest In Shipping?