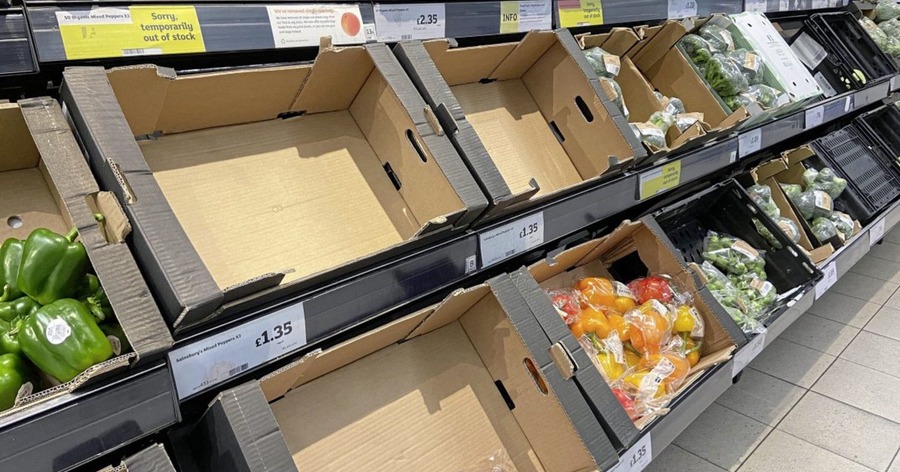 With the freight industry also said to be “overwhelmed” by the new regulations, Ulster Unionist leader Steve Aiken said the assembly should be recalled to discuss the problems.

Just over a week after the UK left the EU, the requirements of the new Irish Sea border, which mean customs declarations are needed for many items arriving from Britain into Northern Ireland, has led to difficulties at ports for hauliers and some retailers struggling to fill shop shelves.

Ready-made products and fresh fruit and vegetables appear to be the main items missing from supermarkets in recent days following new rules applied on imports of food and other products.

Temporary shortages of some products has been exacerbated by other issues including new Covid-19 restrictions, which has led to people over-buying, and the temporary halting of cross-channel traffic between Calais and Dover before Christmas due to the new strain of coronavirus.

Cabinet Office Minister Michael Gove said trade from Britain to Northern Ireland “will get worse before it gets better”.

With businesses bracing themselves for more disruption in the coming weeks, there have been calls for the UK government and EU to “find long-term workable simplications”.

Aodhán Connolly of the Northern Ireland Retail Consortium said while only a few hundred products from around 40,000 are currently unavailable, immediate action was needed so “we don’t face a cliff edge at the end of March” when an exemption period which applies to supermarkets and other food importers runs out.

“Retailers are working hard to continue to supply Northern Ireland given the changes that were brought in at the end of the transition period,” he said.

“Some of those regulations, such as for parcels, were only given to retailers and logistics firms on 31 December which did not give any time to prepare.

“That meant that some retailers stopped shipping parcels for a short period but the majority have now come back online.

“There has been some disruption to supply in other areas too while some GB suppliers get used to a new way of trading with Northern Ireland and this was exacerbated by the days that fresh food was not able to pass from the EU to GB.

“But retailers are adept at quickly changing supply chains and while there may be slightly less choice there is plenty of stock.

“However in the long-term we will need the UK government and the EU to work with us to find long term workable simplifications that keeps choice and affordability for NI families while keeping Northern Ireland business competitive.”

“The industry has been overwhelmed with the new administration and regulations which have come in a flick of a switch,” he said.

“We have outlined our concerns to the UK government, the cabinet and the Northern Ireland Executive, but more needs to be done.

“Food is still moving, but some operators are still getting to grips with the new regulations. Anything that can be done to streamline and simplify these has to be considered.

“The guidance was so rushed and last minute, the UK government and EU needs to agree to ease the adjustments until the industry is on top of it all.”

Agriculture minister Edwin Poots, whose department is responsible for the new Irish Sea border, has warned that some food will be unavailable if changes are not made.

The DUP minister, whose party campaigned for Brexit, said after speaking with hauliers, supermarkets and processors, job losses and rising costs could be expected.

“A wide range of frozen and chilled foods will be unavailable after the temporary exemption period ends,” he tweeted.

Mr Poots said he had met senior British government officials to “highlight the scale of the problem and urged them to take steps up to and including invoking Article 16” to revoke the protocol “as it is evident (it) is damaging Northern Ireland at the economic and societal level”.

He said the last week had been “light touch” and the situation would become more difficult in coming weeks, blaming Sinn Féin, the SDLP and Alliance for supporting the protocol.

The claim was dismissed by nationalists, with SLDP leader Colum Eastwood replying “You broke it, you own it”, while Sinn Féin’s Martina Anderson said: “If you didn’t know this was going to happen because of Brexit, you were asleep at the wheel.”

Calling for the assembly to be recalled, he said “we need to see action to deal with the issues facing businesses and consumers today”.

“The very real impact of the regulatory border in the Irish Sea is becoming clearer by the day,” he said.

“It is impacting trade across the board and not just in the transport of foodstuffs.

“However, the UK government`s response so far has been woeful.”

The World’s Next Giant Oil Discovery Could Be Here