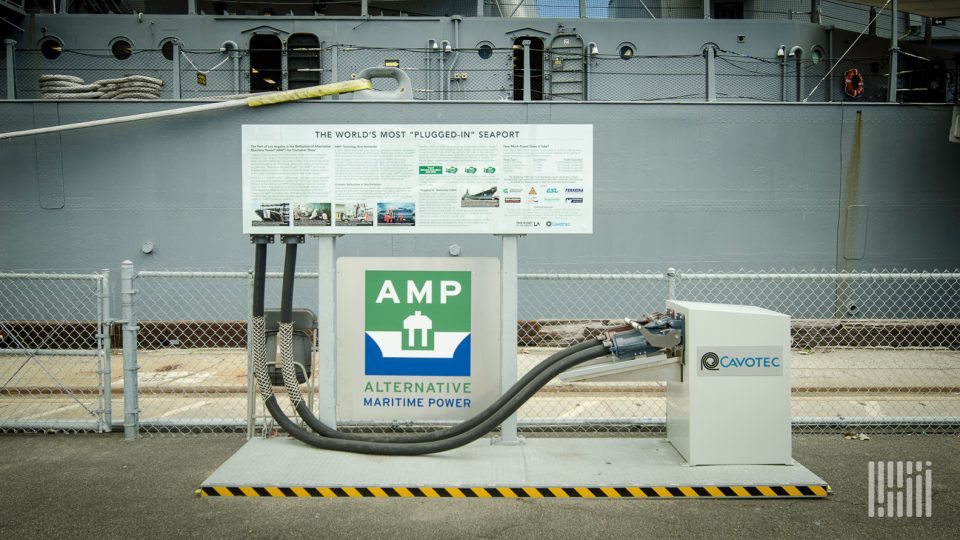 The California Air Resources Board (CARB) has proposed expanding the type and number of ships that must use shore power or an alternate method to reduce air pollution while at berth.

The board held a hearing last month on the Proposed Control Measure for Ocean-Going Vessels at Berth and is considering written comments before holding a second hearing, tentatively planned for the spring.

Existing rules require most container ships, conventional refrigerated ships and cruise ships to use shore power when docked in ports rather than run their auxiliary engines to create electricity for “hoteling” purposes — lighting, air conditioning or operation of shipboard equipment. This is sometimes called alternative marine power (AMP), shore-to-ship power or “cold ironing” (since ship engines are cold when turned off).

Alternatively, instead of “plugging into” the shoreside grid, ships can continue to use their auxiliary engines and use a system to “capture and control” engine exhaust.

The proposed regulation will:

·       Make smaller container, reefer and cruise ships (about 10% of these types of ships calling California today) subject to the shore power regulation. Those requirements would phase in beginning in 2023.

·       And phase in tankers, beginning in 2027 at Los Angeles and Long Beach terminals and in 2029 elsewhere. In addition to the ships’ auxiliary engines, the regulations would require large tanker vessels that carry crude oil to reduce emissions from boilers used to drive steam-driven pumps so that cargo can be offloaded.

·       Add ports and terminals, including refinery docks, in Northern California in cities such as Stockton, Richmond, Rodeo, Benicia and Martinez.

Mary Nichols, the chair of CARB, said, “Further emissions reductions from oceangoing vessels at berth are needed to provide public health benefits to the port communities that are already heavily burdened by air pollution from port-related freight sources, as well as to contribute to our ozone and greenhouse gas reduction goals.”

Will Barrett, director of clean air advocacy at the American Lung Association, said 20 health organizations are supporting the CARB proposal “because we view pollution from the ships to be such an unacceptable health risk in our local communities.”

“As freight traffic is projected to grow, along with it carcinogenic diesel particle pollution will grow. And the cancer risk and other health burdens will grow along with that, unless we take strong actions like this rule,” he said.

“We support shore power,” said Chris Cannon, the chief sustainability officer at the Port of Los Angeles. “We probably have more experience with shore power than anybody because shore power really was pioneered in the San Pedro Bay.”

But, he added, “we just want to make sure that whatever you enact is feasible and that it gets the most bang for the buck.”

Nicole Light Densberger, a staff air pollution specialist at CARB, said the new rule would increase the number of vessel visits under the rule by 2,300 per year so that nearly 75% of the over 8,000 annual visits by oceangoing vessels would be covered by the regulation.

As an alternative to plugging into the shore-based electrical grid, ships can reduce pollution by using a CARB-approved capture-and-control system that removes pollutants such as particulate matter, and oxides of sulfur and nitrogen. Three of these are in use currently: two mounted on barges used in the Ports of Los Angeles and Long Beach and one wheeled unit used at Pasha’s terminal in Los Angeles. These were described as “bonnets” that fit over the exhaust stacks on ships.

CARB estimates the regulation would have a total net cost of $2.16 billion between 2021 and 2032, and that it would result in avoided adverse health outcomes costs of $2.25 billion.

It estimated the unit cost of the regulation would amount to $1.11 per TEU for container or reefer vessels, $4.56 per cruise passenger, $7.49 per automobile moved on a ro-ro ship, and less than a penny on a gallon of finished product for products moved by tanker.

Densberger noted that some Northern California tanker terminals have docks that extend up to one and a half miles offshore. Modifying those facilities so that ships can comply with the CARB regulations is expected to take the most time due to construction and permitting challenges.

She said the CARB staff has “set ambitious implementation timelines for realizing the health benefits of this regulation as early as possible, but we also realize there may be some uncertainty with adapting these technologies for new vessel types and also with the infrastructure developments that may be required.” So it has planned an interim evaluation of the rule in 2023 to assess progress made for ro-ro and tanker vessels.

Industry groups are concerned about the cost and practicality of extending the new regulations to some ships. Container, reefer and certain cruise ships are commonly deployed in regular rotations, calling the same terminals many times a year. That makes it easier for ports and terminals to install the infrastructure needed for alternative marine power where the ship regularly berths and plugs in. But if a ship calls a port infrequently, or its equipment to plug into shoreside power is not located near the “vault” where the shoreside power equipment is located, the benefits of cold ironing can become much more expensive or difficult to obtain.

The World Shipping Council (WSC), the primary trade organization for the container liner industry, said it had serious concerns about expanding “the applicability of that system to new classes of vessels, particularly ro-ro vessels, which comprise a large number of discrete vessels, only a small percentage of which make infrequent and very short port calls (on average 14 hours and short as 9 hours) in California.”

It said CARB had not presented a “cost-effective pathway … to new classes of vessels, particularly ro-ro vessels without a clear and comprehensive cost benefit and feasibility analysis for each class.”

Tom Dow of Carnival Corp. noted that some of his company’s ships, such as the Queen Elizabeth and Queen Victoria, call California ports only once or twice a year.

While some industry representatives wondered whether the proposed CARB regulations were too ambitious, other speakers questioned whether they went far enough.

John Gioia, a supervisor in Contra Costa County and member of CARB, wanted to know more about the exemption for dry bulk and general cargo ships, especially in light of plans to build a bulk terminal in Oakland.

Phil Martien, director of the assessment inventory and modeling division at the Bay Area Air Quality Management District, also wanted CARB to consider adding controls on bulk vessels calling ports near communities identified in California law AB 617 as most impacted by air pollution. These include communities near the ports in Los Angeles, Long Beach, Oakland, Richmond and San Diego.

Martien also asked CARB to “consider accelerating the compliance deadline for oil tankers to Jan. 1, 2025. A decade is too long to wait for the air quality improvements that are needed in Richmond (where Chevron has a major refinery) and other overburdened communities in and near Bay Area refineries.”

Densberger said that “technology manufacturers have assured CARB staff that there are engineering solutions for both ro-ro and tanker vessels” and that CARB’s timelines were “aggressive but feasible. However, to address the uncertainty of the timelines for these new vessel types, CARB staff propose an interim evaluation in 2023 to assess the progress of adapting technology for new vessel types and also the necessary infrastructure improvement projects that might be going on.”

Because CARB recognizes that ships may not be able to use shore power for every visit, vessel operators and terminals will be given a limited number of exemptions for terminal incident events (TIEs) or vessel incident events (VIEs). These could be used, for example, if a ship were unable to plug into shore power. For example, because of a mechanical problem, a shipping company might have to swap out a vessel regularly used in service to California with a vessel not equipped to use shore power. Or perhaps to meet a surge in demand by shippers, a company may put an “extra-loader” that is not equipped with shore-power equipment.

While the BP America terminal in the Port of Long Beach is equipped with equipment that has allowed ships operated by Alaska Tanker Co. to use shore power since 2009, Tom Umenhofer, vice president of technical and regulatory affairs for the Western States Petroleum Association, notes that it was built to accommodate ships regularly delivering Alaskan crude oil to the port.

But those ships are atypical. Other tankers carrying crude oil “visit California ports once, twice, perhaps three times a year. It’s a different vessel. It’s from an international fleet. We don’t own them by and large. We have no control over them.”

Umenhofer, Saul Stashower from the consultancy Woodbridge Marine, and the tanker industry trade association INTERTANKO also expressed concern about the risks of fire, explosion and pollution that could arise from CARB’s proposal.

“The risk of using electrical power instead of classic steam power in tankers transporting hydrocarbon cargoes should be addressed,” Drago Rauta, technical director at INTERTANKO, told CARB in a letter.