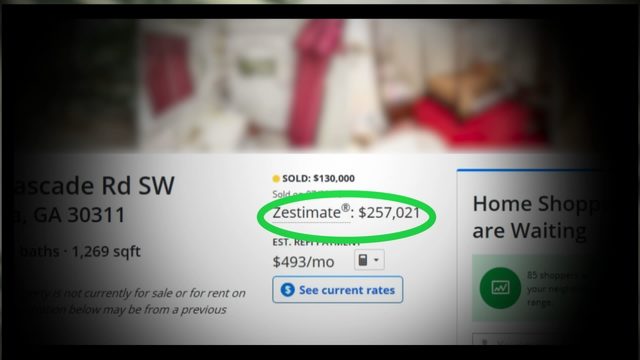 Homeowners are selling their houses for tens and even hundreds of thousands of dollars less than they are worth, a Channel 2 Action News/Atlanta Journal-Constitution investigation learned.

One elderly woman contacted Channel 2 Action News after she sold her southwest Atlanta home for more than $140,000 less than real estate site Zillow estimated it was worth.

The woman did not want to be interviewed by the news organizations, and her name is not being used in this story.

Channel 2 investigative reporter Justin Gray spoke with the real estate broker who found the elderly woman on the side of the road with her belongings while the wholesalers who bought her home cleared it out.

“The wholesaler would come to her house every single day and beg her to sell,” said Robin Andrade, who runs Sell Atlanta. “She would say no. Then they started bringing her dinner, they started asking her if she needed her medication picked up from the pharmacy, they befriended her.”

Andrade got a call about a woman who had just sold her home who needed help buying a condo.

“She didn’t have enough money for a condo, and she was almost 80 years old.” Andrade said she knew why wholesalers would want the home. “It’s in the west end by the (Atlanta) Beltline. It’s the hottest, juiciest neighborhood right now in Atlanta.”

“They’re literally doing nothing to the property … and selling it the same day to somebody else for significantly more,” Stein said.

The wholesaler group that was involved in the purchase of the elderly woman’s home holds weekly training sessions called “Wholesale Live” in southwest Atlanta. A Channel 2 producer attended the event undercover.

The producer paid $35 to attend the session, where the “Wholesale Live” crew had her cold-call owners of off-market homes around the metro.

Their technique was not to take no for an answer and try to get homeowners to sign a contract to sell the same day. The wholesalers even provided a script for cold callers.

If an attendee’s lead resulted in a signed contract, they would get a cut from the sale.

“It’s like a boiler-room atmosphere. Everybody is here in one room making phone calls,” a member of the “Wholesale Live” crew said during the session.

When Gray went to a “Wholesale Live” session to ask about the elderly woman’s home, organizer Monique Williams said the woman approached their team about selling her home.

“My name is not on any documents,” Williams said.

Williams is not on any of the home sale documents Channel 2 reviewed, but her Instagram account, @Mohustle_810, follows every step of the purchase and renovation of the elderly woman’s home.

Williams and a fellow “Wholesale Live” instructor appear in a posted testimonial video at the closing attorney’s office on the day of the sale about the elderly woman’s experience “working with the team.”

“They’re like my children,” the elderly woman said in the video.

In other videos, Williams documents the flipping process, including inviting Instagram followers to a “demo party” to educate them on the renovation process.

“Of course, guys, when you acquire properties, especially directly from the seller, and they’ve been in their house a long time, it’s possible you may run into these types of situations,” Williams said in a video recorded in the basement of the elderly woman’s home, explaining that they would have to remove 47 years’ worth of furniture and other belongings.

David Blake, with Georgia’s Department of Human Services Division of Aging Services, trains police across the state to prosecute elder abuse cases. Gray asked him if buying a home from an elder at a bargain could be a crime.

“And that’s against the law?” Gray asked.

“Yes,” Blake said. “That would be considered financial exploitation.”

Channel 2 has not found evidence that the wholesalers have committed a crime, but an Atlanta police fraud investigator did contact the news station with questions about the case.

The news station passed the investigator’s information on to the elderly woman’s attorney.

Whether it was a crime or not, Andrade said the situation the elderly woman was put in was wrong.

“There is absolutely no doubt in my mind that they took advantage of her,” Andrade said.