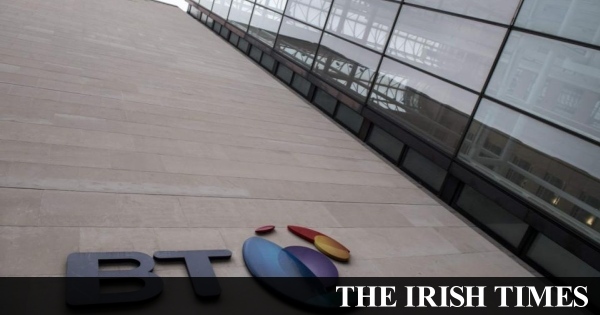 Telecoms giant BT Group is establishing a standalone subsidiary in the Republic to manage its global procurement needs which will have a £13 billion (€14.5 billion) annual budget.

The new company is to be responsible for managing the group’s spend with suppliers around the world. The move is part of a restructuring programme intended to deliver savings of £2 billion by 2025.

BT’s chief procurement officer, Cyril Pourrat, who will lead the subsidiary, said it was too early to discuss how many people the new business might employ but said BT was “excited about the prospect of accessing the deep talent pool in Ireland”.

He told The Irish Times the subsidiary would operate on an “arm’s-length” basis with group companies.

“It will perform a critical role in setting procurement strategy, planning and making recommendations as to how money is spent,” said Mr Pourrat.

BT, which is Britain’s largest fixed-line and mobile operator has customers in 180 countries. It already has a big presence here though BT Ireland, which operates on an all-Ireland basis.

BT Ireland reported revenues of €419.6 million for the year ending March 2019 with operating profits of €45.8 million. The unit, which employs more than 600 people, paid a €85 million dividend to its parent last year.

Mr Pourrat said the telco was in the midst of “radically changing its existing procurement capability” in a move that will simplify processes and introduce artificial-intelligence-powered technology.

“BT already has a significant presence in Ireland, which helped in the decision to locate in Dublin but the city has also established itself as a hub for many ‘big tech’ businesses as well as start-ups. Moving our procurement function to Ireland also allows us to set up a new organisation that has the feel of a start-up and all the excitement and energy that goes with it,” he said.

“Our strategy is to form partnerships with other European telcos that not only leverage combined scale, but provide a transformational platform for joint innovation, strategic collaboration and partner-driven growth. Being based in an EU member state would make it easier for potential European partners to join us,” Mr Pourrat added.

BT, which upset investors by suspending its annual dividend for the first time in 36 years in May, recently issued a more upbeat outlook as it announced first-half results.

The group is now forecasting earnings before interest, taxation, depreciation and amortisation before items, to be between £7.3 billion and £7.5 billion in the year to March. That is down from £7.9 billion last year but is a relatively strong performance given the Covid crisis.

For the group’s first half, revenue declined 8 per cent to £10.6 billion while pretax profits were down 20 per cent to £1.1 billion.

BT chief executive Philip Jansen said last month the group had delivered £352 million in cost savings in the first half of the year under its modernisation programme.

The group expects earnings to recover to pre-Covid levels in the year to March 2023.

BT Ireland, which is the State’s second-largest fixed-line network, was rumoured to be up for sale late last year with Mayfair Equity Partners thought to be interested in buying the business for about €300 million. No deal was ever confirmed.

Taat Producing 600 lb / 272 kg of Beyond Tobacco™ Per Day, Increased Capacity from Upgraded Equipment can Provide Material for up to 2.1 Million Taat Cartons Per Year