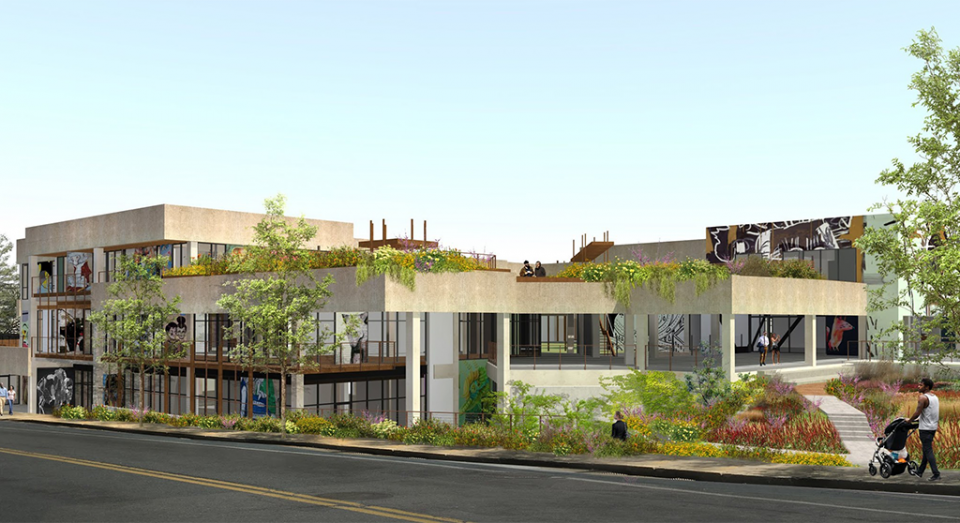 The news last month was that the Cambridge beer brewer Portico plans to open a brewery and taproom in Somerville’s Boynton Yards, at a 45 South St. address not far from where Slumbrew Brewhouse operated until recently, roughly east of Inman and Union squares. (Also, in the Union Square Donuts building and near Taza Chocolate.) The brewery is aiming to raise $75,000 through the online community investment platform Mainvest and, as of Saturday, already had $65,800.

But FAB’s plan is even bigger: While Portico is eyeing 2,000 square feet for its brewery and taproom with some additional space for office, storage and bathrooms, FAB is looking to open more than 8,500 square feet of community-focused brewery and arts space called The Balloon Factory at 1060 Broadway, Somerville, the former Powderhouse School in Teele Square. (The company’s name stands for “food, art, beer.”)

The Balloon Factory will open “as soon as weather permits next year,” said Ben Holmes, founder of the brewery and its bricks-and-mortar endeavors – and previously co-creator and chief executive of Somerville’s Aeronaut Brewing, after work in the sciences at the Massachusetts Institute of Technology and NASA.

FAB is has a $100,000 offering on Mainvest. (And as of Saturday, was at the $22,500 mark.) Investing means sharing revenue off the sales of beer, spirits and live events, but the Balloon Factory plan is not reliant on public funding, Holmes said.

The company has “big plans for the future of Somerville” with a space where art, culture and sciences “collide,” the company said in a Friday email. “Somerville desperately deserves a space like this, where we can almost feel normal again.”

“We believe that art at this time is meant to bring joy to the world. I believe that society relies on people who are creative, and the function of all of us now is to bring joy to life,” said Ben Holmes, founder of FAB Balloon Factory and co-creator and former chief executive of Somerville’s Aeronaut brewery.

FAB will use the Balloon Factory as a space for prototyping and testing beer recipes while opening its large spaces and 25-foot ceilings to the community as an artists collective, for coworking and to “anyone else looking to connect and meet in a post-Covid-19 world,” according to the email. Holmes envisions movable walls designed to “seamlessly crease the new age” between outdoor and indoor space. (On indoor space alone, the Portico and FAB plans are roughly the same size – around 2,500 square feet.)

There will also be ventilation portals, in a nod to coronavirus concerns, and safely precautions at the door, the company says, whether the space is being used for general daytime use or nighttime events.

“The team promises that you will walk away having seen immersive artistic experiences and non-profit opportunities within your community, as well as tasting some fine brews or distilled spirits you couldn’t find elsewhere,” the company email says.

The company has already put a stake in the ground in Somerville, setting up an eponymous gastropub in the former Bergamot restaurant space, 118 Beacon St., after the innovative New American restaurant closed in June – a victim of the coronavirus lockdown. The FAB restaurant is doing a soft launch this weekend, Holmes said.

“The chefs from Bergamot have invited us unto a partnership to re-create it from the ground up as an art gallery and restaurant. Our whole goal is to create a new ambience where the community can come together and feel joyful as the world goes crazy,” Holmes said Saturday, briefly distracted as a customer came in for beer.

The food at the FAB restaurant will be similar as under Servio Garcia and Keith Pooler’s work at Bergamot, relying on seasonal, local ingredients, with an emphasis on seafood. Holmes’ current favorites are the salmon courgette with kohlrabi and a grilled peach and mascarpone dessert. “The biggest change is to the space,” which swapped out tables for plants and art. “There’s more flow.”

There’s street dining as well, and while the restaurant plans to do a lot of takeaway, it’s considering heat lamps for colder-weather dining and what to do during the winter to “try to move folks safely ahead,” Holmes said.