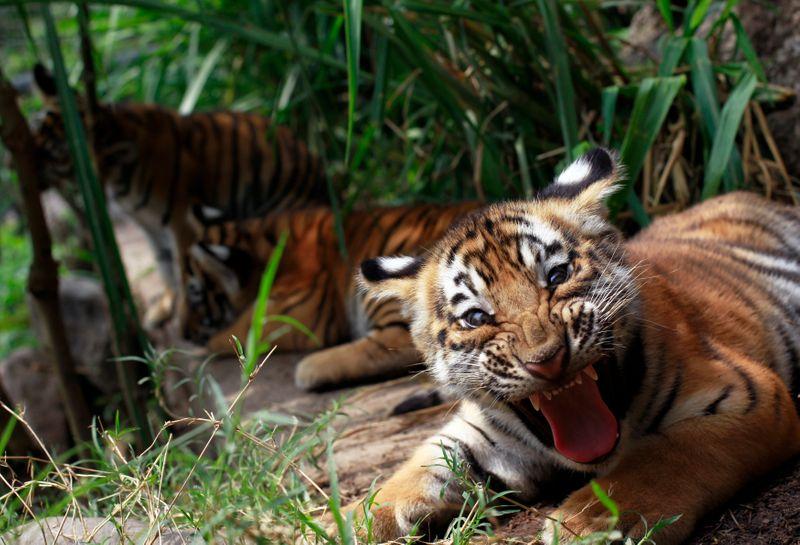 LONDON (Reuters Breakingviews) – Financial innovation is booming in the seemingly humdrum world of supply chain finance. The business of lending to companies’ suppliers helps them preserve scarce working capital. Yet it’s also been likened to a tiger trap – a spiked pit designed to catch and contain big predators. Murky accounting and poor disclosure are to blame.

Two-months old Bengal tiger cub Tily reacts in its enclosure at the animal refuge La Fundacion Refugio Salvaje (Furesa) in La Libertad on the outskirts of San Salvador May 23, 2013.

Supply chain finance is hardly new. The practice of selling an invoice to a third party at a discount to its face value, rather than waiting for a customer to pay their bill, perhaps dates back as far as Ancient Rome. In 2018, institutions financed invoices worth some 2.8 trillion euros, according to trade association FCI.

But the business is changing rapidly. New players are using sophisticated software to track and transfer companies’ invoices in real time. Financial innovation is also driving the boom. Upstart intermediaries are parcelling up invoices into bonds and selling them to asset managers, insurers and pension funds. London-based Greensill acquired $150 billion of receivables last year. Supply chain funds overseen by Credit Suisse Asset Management have grown to around $9 billion in just three years.

The business also keeps cropping up in financial disasters. The crises at Abengoa, the Spanish construction group that failed in 2015, and UK outsourcer Carillion, which collapsed in 2018, were both made worse by heavy dependence on supply chain finance. Previously undisclosed facilities have also added to the turmoil at Gulf hospital operator NMC Health. The worry is that it’s enabling companies to take on risks that are hidden from other creditors and investors.

Of particular interest is a practice which is typically called “reverse factoring”, although it has many different names. In conventional factoring, a small supplier borrows against a promised payment from a bigger customer. In reverse factoring, the large customer acts more like a borrower, committing to make a payment, enabling the lender to pay the company’s suppliers in good time. This can be a good deal for all parties. The supplier piggybacks on its larger customer’s better credit rating, getting cheaper funding. The customer keeps its suppliers happy, enabling it to demand better terms.

Yet that’s not the only benefit. Sometimes the lender also agrees to be paid later than an ordinary supplier. That improves the big customer’s working capital. In a recent letter to the Financial Accounting Standards Board, four accounting groups noted that some supply chain financing programmes allow companies to stretch their payment terms from the standard two or three months to as long as a year.

If things go well, customers, suppliers and lenders are happy. The catch, though, is that reverse factoring is a lot more like ordinary debt. Big companies’ borrowings are concentrated with a single lender, giving them less flexibility to delay or dispute payment.

Accounting and a lack of disclosure make things worse. Liabilities to suppliers are typically treated as trade payables, and so can be excluded from conventional debt measures. Moreover, companies don’t always say when they use reverse factoring.

If used excessively this can make companies seem in better financial health than they really are. Take Carillion’s seemingly innocuous “early payment facility”, which helped stretch out some payments to 120 days. This flattered its cash flow and reported debt, Moody’s Investors Service reckons. While the existence of the facility was public, the company did not disclose its size. According to the rating agency, Carillion owed 498 million pounds through the scheme, much more than its reported borrowings.

Investors are now more alert to such programmes. Short-seller Muddy Waters recently argued that NMC’s debt levels are flattered by its supply chain finance facility. NMC says its supply chain finance facilities are correctly accounted for as trade payables. More worryingly, though, the group on Wednesday revealed that it had guaranteed $335 million of financing for suppliers of entities controlled by its top shareholders, including founder B.R. Shetty, that were not approved by its board or disclosed to investors.

The fear is that such facilities can leave companies scrambling for cash when they need it most. If the lender stops funding new invoices, the company will have to quickly find alternative sources of finance, while its suppliers will be spooked when they no longer receive prompt payment. That’s why Moody’s analysts likened reverse factoring to a tiger trap. Once the big cat has fallen into the previously hidden hole, it cannot get out.

Some companies do disclose their use of supply chain finance. AstraZeneca’s 2018 annual report disclosed a $166 million programme for suppliers in the United Kingdom, Germany, Sweden and the United States. The drug giant says the liabilities were recorded as trade payables and settled on the date the invoice was originally due. However, Moody’s reckons that fewer than 5% of the companies whose debt it rates report such facilities.

As long as accounting rules and loan covenants draw a distinction between trade and financial liabilities, official disclosures are hard to fix. However, auditors are looking more closely at reverse factoring. One rule of thumb is that if the programme provides longer-term funding than a standard trade liability, it should be treated as debt.

The simplest solution is transparency. Investors should know how much companies depend on supply chain finance, and how the programmes affect their payment terms. Scandals like Carillion are making accountants and investors demand better disclosure. Clearer signposts should help companies and their investors steer clear of the tiger trap.

Reuters Breakingviews is the world’s leading source of agenda-setting financial insight. As the Reuters brand for financial commentary, we dissect the big business and economic stories as they break around the world every day. A global team of about 30 correspondents in New York, London, Hong Kong and other major cities provides expert analysis in real time.

We are open for MSP procurement through eNAM: NAFED at BusinessLine Agri Summit

Supply chain radar: ONE direction is no aberration