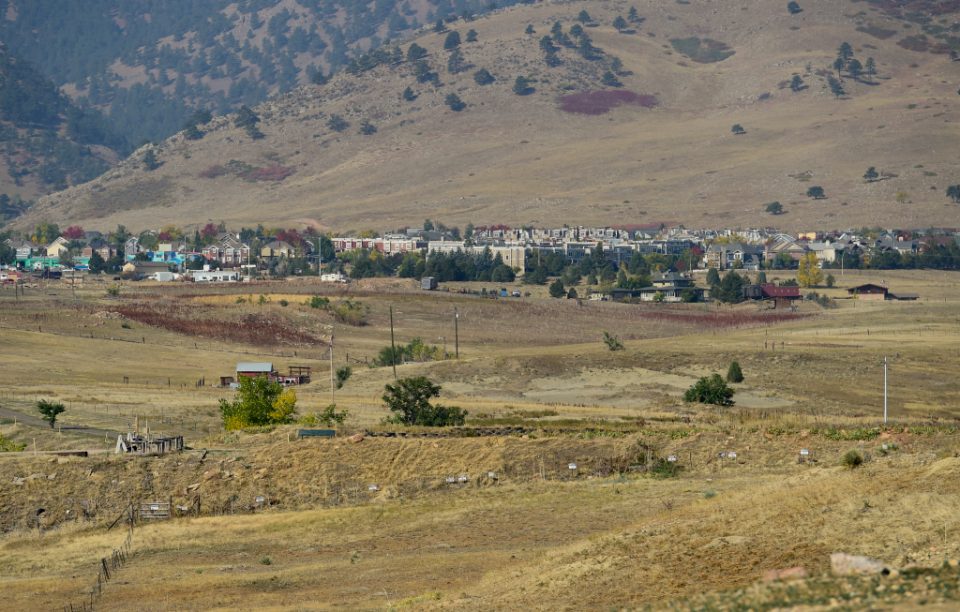 In advance of a public hearing to potentially determine the fate of a proposed expansion to the Boulder Rifle Club, a group of neighbors is speaking out against the project due to concerns about noise impacts, increased traffic and disturbance to local wildlife. Conversely, supporters of the proposal see the expansion as a chance to mitigate unsafe shooting practices, by offering sports shooters a safe place to recreate.

The Boulder County commissioners will host a virtual public hearing at 1 p.m. Oct. 20 to hear public feedback and consider the Boulder Rifle Club’s application for a special use permit. The Boulder Rifle Club, a private range, started the application process about a year and a half ago, with the goal to build five additional shooting ranges at the existing location, 4810 N. 26th St.

The expansion would include: 300-yard, 200-yard, 100-meter, 50-meter and 25-meter firing lines with targets to the north. The club would also build a 20,050-square-foot indoor range building; five 3,132-square-foot range shelters; three 144-square-foot bathroom facilities in addition to its 1,612-square-foot existing range building, according to online materials from the planning commission staff recommendation packet for Aug. 19. The expansion would take place on an adjacent 14 acres of property west of the club that was purchased by the club in 2005. The planning commission has recommended denying the application, namely due to concerns about the perceived increase in noise.

The decision on the expansion, however, is about more than just a potentially larger range.

Since 2013, the county has been part of the Northern Front Range Recreational Sport Shooting Management Partnership, an effort that includes the U.S. Forest Service and Colorado Parks and Wildlife, as well as Larimer, Gilpin and Clear Creek counties. Those in the partnership are working to create safe alternatives to people practicing recreational shooting in the wilderness. With the U.S. Forest Service looking to close areas of the Arapaho and Roosevelt National parks to recreational sports shooting, that closure plan involves the counties in the partnership coming up with alternatives for sports shooting locations. The county sees a Boulder range as a potential solution.

Michelle Krezek, the Boulder County commissioners’ chief of staff, said in order for those natural forest areas to close to recreational shooting, the county needs to have two facilities developed.

“If this range is approved and built, then the Forest Service will close areas of Boulder County that have been determined to be unsafe for sports shooting,” Krezek said. “It’s kind of a phased approach. The plan has some geographic requirements, so it will close areas associated with that geography.”

A map showing the land that would be closed in Boulder County can be found on the U.S. Forest Service’s website at fs.usda.gov/Internet/FSE_DOCUMENTS/fseprd641981. Krezek said the closure would apply to areas in gold.

But people who live near the range say the proposed location is not the right place to fulfill this plan.

One resident, Daniel Weller, a retired air traffic controller, has lived about a mile west of the Boulder Rifle Club for 22 years. Weller wasn’t able to attend the first public hearing last summer, because only residents within a 1,500-foot radius of the club were notified of the meeting. That range was later expanded to 1 mile within the club.

Weller said he expects noise issues to get worse with an expansion.

“We have a lot of folks using the rifle range,” Weller said. “It’s a constant rat-a-tat-tat sound. It sounds like maybe 30 guys on top of a roof starting to nail shingles on a roof. It just gets to you after a while.”

Weller said he doesn’t hear the sound inside his home, but can hear the gunshots when he’s outside.

A sound study on the range was conducted Feb. 8 last year. During a public hearing last summer, Andrew Truitt, an acoustical engineer with Behrens & Associates, shared those results with the public. The study says the homes nearest the range measured sound levels below the Boulder County Land Use Code limit of 65 decibels maximum impulse. But Weller, and other neighbors, questioned if the sound study took into account all the factors.

“They didn’t ask anyone out this far to place sensors,” Weller said. “They did a basic study and a lot of computer modeling on what they think might happen. Nobody really knows, until they build the thing, what the actual sound is going to be like.”

The sound study was conducted at four locations within a half mile south and southwest of the Boulder Rifle Club, according to the study.

Shannon Bryant, a health security consultant, has lived in her home about a mile north of the range for about three years. She raised issue with the idea that the range is a total solution for mitigating irresponsible shooting in the wilderness.

“There’s nothing that suggests that in reality this will keep people from shooting in the national forest,” Bryant said. “They’re going through all these mechanizations to put this in place, but there’s no guarantee that people won’t continue to shoot where it’s free … and it’s closer to where they live in the mountains.”

Charcie Chase, a fellow neighbor who lives about a mile from the range, added: “Everyone is in support of the Forest Service wanting to stop shooting on public land, but the proposal of this — it’s the wrong location for public safety and public health reasons.”

When Heather Collaton thinks about the expansion, she thinks about the wildlife she’s seen in her own backyard: deer, bears, mountain lions and even a pair of playful bobcats she caught on video playing in the snow on her back porch.

“It’s really why we are fighting this to save our wild places in Boulder — but this doesn’t seem like an issue the county or rifle club cares about,” Collaton wrote in a text message.

She expressed concern about a conservation easement, which is held by Boulder County through parks and open space, that according to the online application material would be replaced by a restrictive covenant if the project is approved. Krezek said the covenant would restrict the development allowed on this parcel of land.

The Hidden Valley Trail, which is part of the Mesa Reservoir Trail Complex, would be 600 feet from the expanded range. Krezek said the trail has already been slated for relocation. According to the application materials, the Mesa Reservoir Trail complex is scheduled for a public engagement and construction process from 2021 to 2026, including the relocation of the Hidden Valley Trail. Online documents say the “applicant shall pay $30,000” to the city and open space to help cover the cost of relocating the trail.

Other neighbors also shared concerns about the proposal. Dale Pugh, a personal injury attorney for Dale Pugh Law LLC in Westminster,  offered to work pro bono as a spokesperson for about 25 households in the Holiday neighborhood. Pugh said he was contacted by neighbors to represent them. Pugh said they were familiar with him, because he said he represented a client in 2010 who had a bullet go through his home at 3900 block of Pebble Beach Drive — roughly 1.5 miles south of the Boulder Rifle Club. Then-president of the Boulder Rifle Club Grant Von Letkemann said the bullet “didn’t come from our range.” The Boulder County Sheriff’s Office investigated the incident as a case of criminal mischief and reckless endangerment.

Pugh said his clients are “afraid to make their identities known because they fear retaliation by the Sheriff’s Office.” In regards to the expansion, Pugh said the people he represents mainly have a concern with noise.

“The noise issue becomes especially problematic for those residents with children who want to play outside, residents who want to enjoy their outdoor decks and patios and even veterans like myself who do not wish to reimagine a war zone outside their house,” Pugh wrote in an email. “Those with PTSD from military service are particularly affected by gunshot noise.”

The rifle club plans on installing 8-foot ballistic barriers and 20-foot backstops that will surround each of the proposed five ranges. Krezek said this reinforcement may mitigate some of the noise issues nearby residents deal with today.

Finally, Pugh said some neighbors believe it’s the wrong time to vote on the issue, since two of the three Boulder County Commissioners — Deb Gardner and Elise Jones — have terms that expire in January. Gardner is also involved with the Northern Front Range Recreational Sport Shooting Management Partnership. Each county has a commissioner as a representative, according to Krezek.

Krezek added she doesn’t believe it’s a conflict of interest to have Gardner be involved in the partnership and vote on the issue.

“It’s not at all a pro-shooting group,” Krezek said. “It’s a group that’s come together to try and figure out how to address the issue of sports shooting on federal land.”

When asked how he responds to neighbors’ concerns over retaliation from the sheriff’s office for speaking out against the proposal, Pelle wrote in an email: “I haven’t heard about fears of retribution, and of course there wouldn’t be any.”

Pelle added, “Our position is that we would like to be able to continue to train there when needed, and we would hope neighbors’ concerns about noise and safety can be properly addressed with good design. But it’s a planning and zoning decision that is far outside our influence.”

The statement added the expansion is not “strictly” for the “benefits of members.”

“The reason we chose to partner with Boulder County, the U.S. Forest Service, Colorado Parks and Wildlife and others participating in the Sport Shooting Partnership was to offer a safe solution for the problem our communities experience associated with irresponsible (dispersed) shooting,” the statement read.

“I don’t at all discount their concerns,” Krezek said. “I just think the issue with this particular application is that it’s an existing use that’s coming forward to be improved, and it will help us solve a bigger problem that we have in the county.”

People interested in listening in or signing up for the virtual meeting, can visit the county’s website at landuse.boco.solutions/boco.lu.docketlistings/app/detail.html?docket=SU-19-0009. People can still share public feedback on the issue by emailing planner@bouldercounty.org. Feedback is recommended for submission before the meeting so commissioners have time to read it.

Procurement rules can trip up agencies in emergencies, but permissions exist