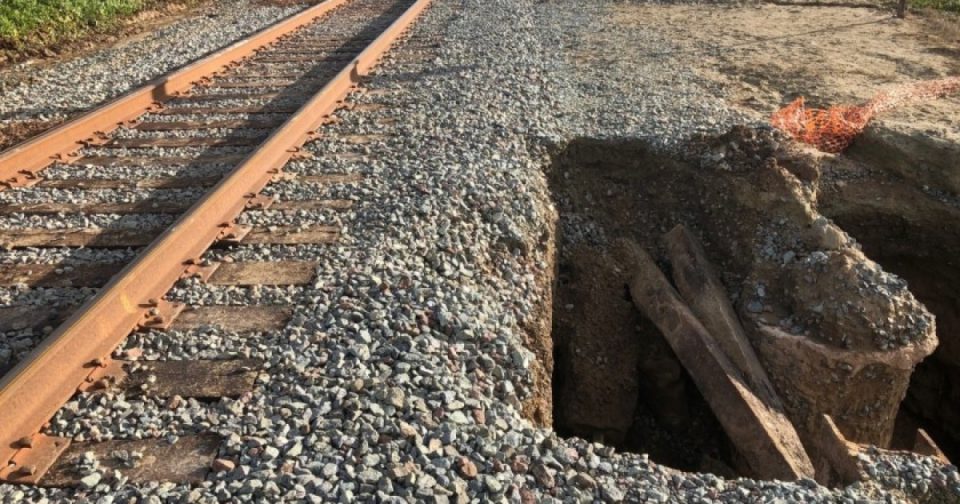 Following heavy rains, a section of the Del Mar bluffs collapsed sometime around Friday morning, Nov. 29, within feet of the train tracks that regularly carry passengers between Los Angeles and San Diego.

The cliff failure occurred south of Seagrove Park, in front of the Wave Crest condominium complex, according to observers.

“At this time, all trains are safe to move through this section of the bluffs,” Kimy Wall, spokeswoman for the North County Transit District, said in an email. “For added safety, trains are on restricted speed limits and engineers are monitoring the area.”

Wall declined to say when the collapse occurred.

“The first time we saw it was this morning when we woke up,” said Ken Knight of central Washington, who’s vacationing in the area. “It’s probably a foot or two from the ties on the track. It’s close.”

On Saturday, Nov. 30, the North County Transit District will close portions of the tracks south of the Solana Beach train station to make repairs. Bus service will be provided to assist travelers.

Service for the Amtrak Pacific Surfliner will also be affected. For more information go online at PacificSurfliner.com or call 800-872-7245.

Regularly scheduled train service for both Amtrak and the Coaster is expected to resume on Sunday, Dec. 1, according to the news release.

Del Mar has seen a significant increase in bluff collapses in recent years, largely attributed to the destabilizing effects of urban runoff and erosion from ocean waves. Sea-level rise driven by climate change is expected to exacerbate failures in coming decades.

The most recent incident comes after a Thanksgiving storm soaked the San Diego region.

Regional transportation officials have planned a number of drainage improvements and other improvements aimed at stabilizing the bluffs. Long-range plans are also underway to relocate or stabilize the train tracks that service Amtrak, Coaster and freight operations.

Beachgoers in Del Mar and other areas are encouraged to keep a safe distance from steep cliff sides, roughly 25 to 40 feet.

While parts of the bluffs are made of sturdy mudstone, other sections are very precarious, specifically stretches that were filled with loose materials when the railroad was constructed.