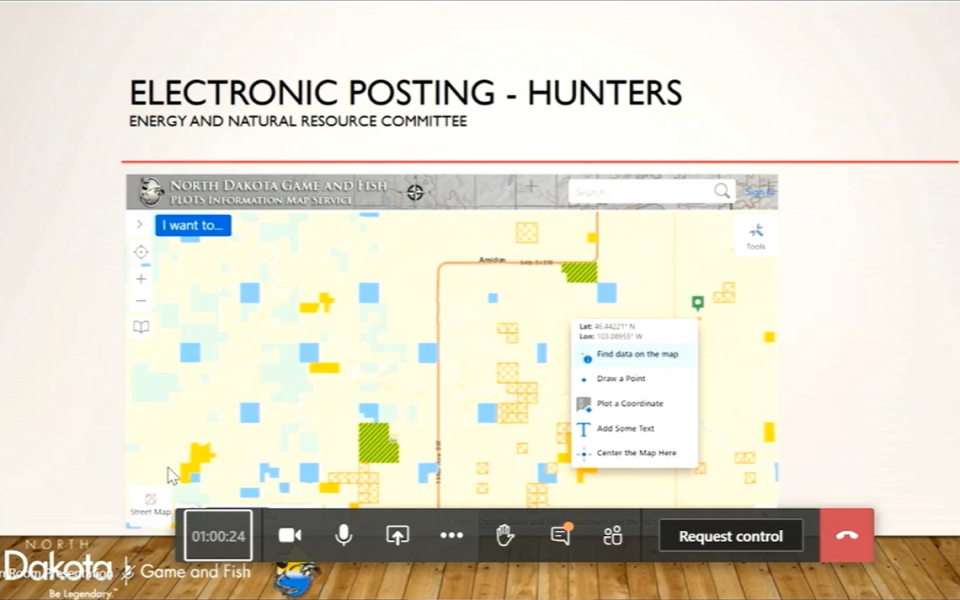 SB 2144 would allow landowners to post land for no trespassing electronically or with physical signs, update the definition of a fence, establish that all fenced land is closed to anyone but hunters and fishers regardless of posting, and allow law enforcement to issue noncriminal citations for trespassing related to hunting and fishing. SB 2036 would extend and expand an interim study of the state’s trespassing laws and land access issues and the use of a database for the purpose of posting land for no trespassing.

North Dakota remains the only state in the region on which private land is considered open unless otherwise posted with physical signs. While the current law is supported by hunting and fishing groups, agriculture groups have long called for an end to the presumption of openness. The 2016 Dakota Access Pipeline protests and related criminal cases brought forward more concerns about the state’s laws and who could enter private land. 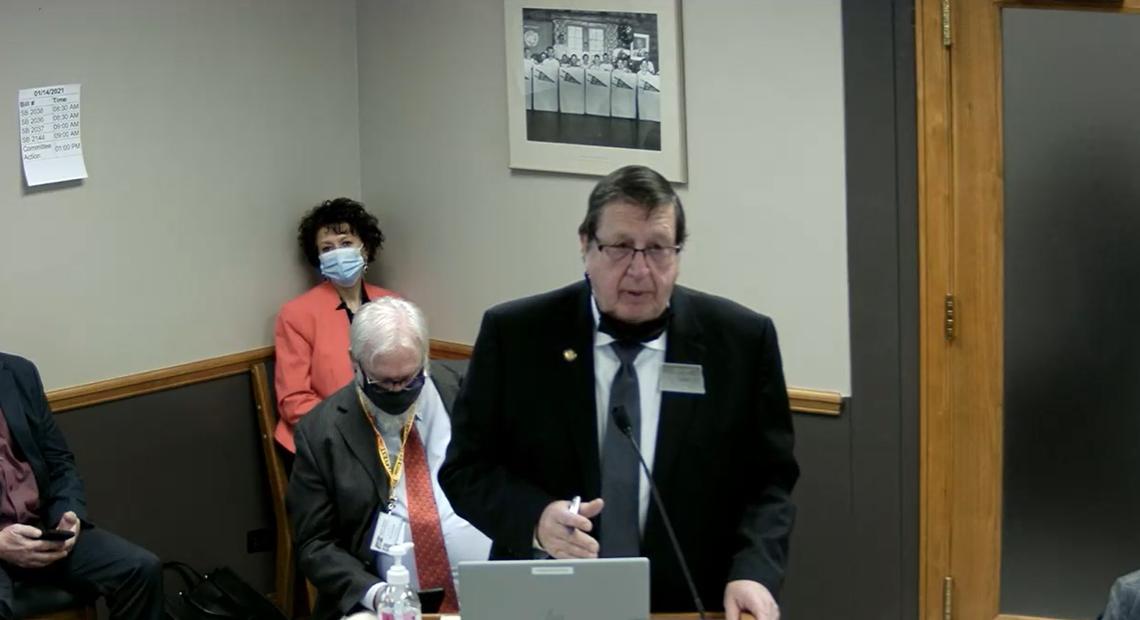 The issue of revising North Dakota’s trespassing laws on private land was among the most divisive of the 2019 legislative session. Sen. Robert Erbele, R-Lehr, said 36 hours went into hearings and committee work on the matter during the session.

While the main bill addressing trespassing in the 2019 session failed, the budget bill for the Information Technology department contained an item calling for a study of land access and the potential use of a database for electronic posting.

Erbele said that study represented a breakthrough of sorts in the issue. In addition to legislators and four citizen members with voting rights on the committee, the study included advisors from the state Department of Agriculture, state Department of Game and Fish, North Dakota Association of Counties, state Information Technology Department and the North Dakota State’s Attorney’s Association. Having all parties at the table helped them find common ground.

“I think we built a bridge, and communication and relationships are the key to that,” Erbele said.

As part of the study, Game and Fish built a web-based database to test in three counties: Richland, Ramsey and Slope. Erbele said the site was used during the 2020 hunting season, not to see how many people would use it but to see how it worked. 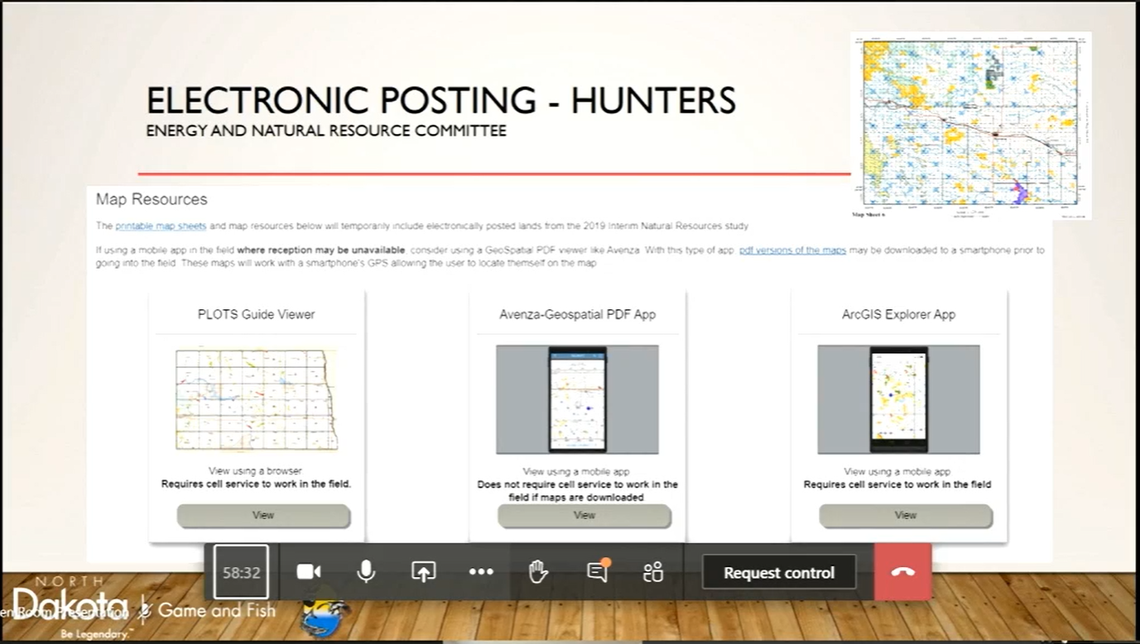 An electronic posting system created by the North Dakota Department of Game and Fish allows several options for learning about whether land is open to hunting and fishing. (Screenshot of North Dakota Legislature hearing)

Brian Hosek, with administrative services at Game and Fish, said landowners in those counties were able to electronically “post” their land for no hunting on the site, and hunters were able to search for information about land to hunt. The system went live in May, and 79 landowners signed up to use it for 260 tracts of land representing 38,000 acres. The system also saw heavy use from hunters in the three counties, with thousands of views on different mapping systems and applications.

Hosek walked the committee through the system and its capabilities, explaining how quickly land can be posted by landowners and different mechanisms hunters can use to find open land or information to contact landowners. Some hunter-focused options can be downloaded or printed in case of poor cell service.

Under the study, there was a deadline of July 15 for landowners to electronically post their land to enable time for compilation of maps. The bills do not give a deadline for posting.

No one spoke in opposition to the bills. Rep. Gretchen Dobervich, D-Fargo, who served on the interim committee, said her father, in Slope County, used the system to post his land and found it easy to use, though he did identify some glitches.

Representatives from outdoors groups and agriculture and landowner groups said the interim committee’s efforts and the bills presented were important steps in the right direction.

“Our members want better hunter landowner relations and we believe e-posting, along with the continuation of physical signs, are good steps to achieving that goal,” he said.

Julie Ellingson, executive vice president of the North Dakota Stockmen’s Association, said her membership still believes that removing the presumption of openness from the trespassing laws would represent the simplest solution. However, she said the efforts were an important step toward greater property rights for landowners, which was a founding issue for her group.

The two bills given do-not-pass recommendations contained similar provisions to the passed bills, but Erbele explained that SB 2144 was a collaboration completed by citizen members of the interim committee and was more complete than SB 2037 or SB 2038. SB 2037 would have allowed landowners not to list their names on no-trespassing signs, an idea that was opposed by outdoors groups.

We Need a Data-driven Approach to Vaccine Distribution

Canada’s pension fund is betting on India, should you too?

Comments Regarding NTIA Petition for Rulemaking

Holiday Shopping in 2020 and Beyond