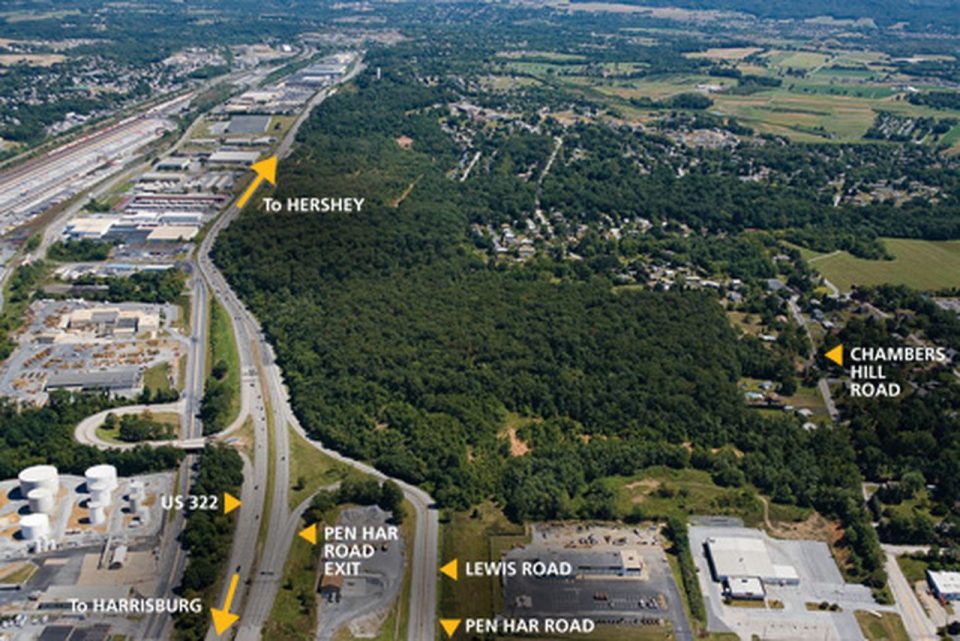 Over 100 new motorists would be traveling in and around the area of U.S. 322 during both morning and evening commutes if a proposed warehouse complex in Swatara Township is given a conditional use permit.

That projection alone is expected to help draw a crowd when the Swatara Township Board of Commissioners hold a second public hearing at 8 o’clock tonight at the township’s municipal administrative building, 599 Eisenhower Boulevard, to discuss a request for a conditional use permit needed to advance site plans that call for four warehouse buildings. The first public hearing was held in October, which was packed wall to wall with residents.

“Residents are concerned about the added traffic in the area, as well as safety and degradation of residential life,” said Zoe Loftus. “We have an elementary school that will be very near the warehouses and that poses environmental, health and safety concerns for the students, also.”

Mushroom Hill, LLC needs the conditional use permit in order to build its complex on a plot of 165 acres. The group of investors is acquiring the land from Smith Land and Improvement Corporation, which currently spans three zoning districts: commercial, general, light manufacturing and residential.

But nearby homeowners say that’s not going to work for them. A group of them met on Sunday to discuss strategy.

“There were close to 40 people in attendance,” Loftus said. “We have enlisted the assistance of [activist and former state Senate canddiate] Eric Epstein to help us sort out what we can do to mitigate the damage from the development to our community.”

Loftus said she expects there to be at least 70 people in attendance at the second public hearing.

“We have a number of studies that we are requesting to be conducted,” she said. “We’re hoping to persuade the commissioners to hold off on any decisions until the studies are returned.”

Frank Petkunas, of CRG Integrated Real Estate Solutions, in Conshohocken, said Mushroom Hill, LLC was created by investors at CRG. He kicked off the hour-and-15-minute presentation of the site plan in October.

The buildings would provide space to employ 300 to 400 employees, Petkunas said.

Employee parking and loading docks would be on the Route 322 side in order to minimize noise, he noted.

While Mushroom Hill hasn’t identified a tenant yet, the idea is to offer the space to “companies that specialize in consumer, nondurable products,” said Petkunas at the October public hearing.

“We’re talking about cereals, apparel, food products, shoe products, maybe something of that nature,” he had said.

He said the warehouse would be used to basically repackage “stuff” and send it “out to distribution to smaller stores.”

Thanks for visiting PennLive. Quality local journalism has never been more important. We need your support. Not a subscriber yet? Please consider supporting our work.