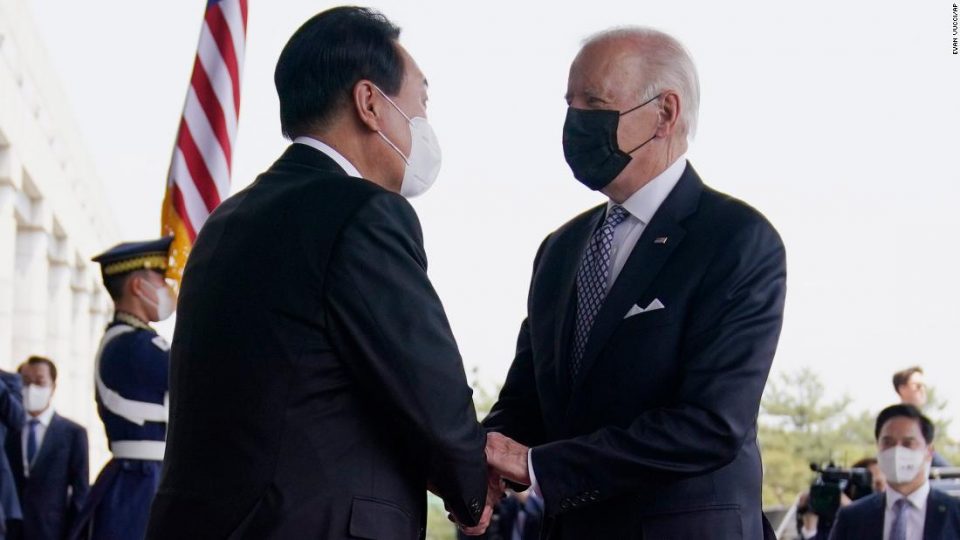 The succinct greeting reflected the Biden administration’s so-far-unsuccessful attempts at restarting diplomacy with Pyongyang. Attempts at outreach to the North have gone mostly unanswered. Instead, Kim has intensified missile launches and could be preparing for a seventh underground nuclear test.

Biden said he was prepared for such contingencies to occur during his first trip to Asia.

“We are prepared for anything North Korea does. We’ve had — thought through how we’re going to respond to whatever they do. And so I’m not concerned,” Biden said.

He was speaking before visiting with some of the nearly 30,000 American service members stationed here as a last stop on his visit to South Korea.

The Americans deployed on the Korean Peninsula have long acted as a signal of US military strength in a region made anxious by the nuclear-armed nation to the north. Increasingly, they also act as a reminder of Western muscle in a region heavily influenced by China.

Biden observed a joint airspace control center where members of the US and South Korean militaries work alongside each other to monitor airspace made tense by North Korea’s intensifying missile tests.

“Our alliance is formed through shared sacrifices of the Korean War and several decades later thanks to you the Republic of Korea is a strong thriving democracy,” Biden told the group, standing near a large screen showing images of the Korean Demilitarized Zone. Biden opted not to visit the DMZ on his visit, unlike his predecessors, because he wanted to see US servicemembers at their base.

“All the American troops that are here and your families, thank you for what you do for our country and our allies,” he said. Later, he joined a group of military families for ice cream.

Earlier in the day, the President met with Hyundai Motor Group Chairman Chung Euisun in Seoul, where he highlighted $11 billion in new investments from the Korean automaker, including $5.5 billion to open a new electric vehicle factory in Savannah, Georgia.

One of Biden’s primary objectives in visiting Asia this week has been to reaffirm his commitment to two key alliances while also seeking ways to further expand cooperation. He’ll depart South Korea for Japan later in the day, bringing with him a similar message of reassurance that America’s longtime ally in the Pacific can depend on the United States as a reliable security and economic partner.

A day earlier, Biden and his South Korean counterpart, President Yoon Suk Yeol, wrote in a joint statement they were open to expanding joint military drills that Biden’s predecessor scaled back, believing them too costly and provocative. Biden said cooperation between the two countries demonstrated “our readiness to take on all threats together.”

The expanded military exercises will be aimed at ensuring “what it takes to best ensure military readiness and best ensure our ability to work closely together,” a senior administration official said Sunday, though declined to offer a timeline or guidance on the scope of the expanded drills.

“Mr. President, your country’s democracy shows the power to be able to deliver for its people,” Biden told Yoon during a toast at the start of a state dinner on Saturday evening. “We’re proud to say, the generals with me today can say as well, that our armed forces stand side by side, standing on a peninsula for seven decades to preserve the peace and make possible that shared prosperity.”

He was likely to take a similar message to Japan, which also hosts a sizable population of American service members and maintains a mutual defense treaty with the United States. Increased provocations from North Korea and territorial grabs by China have caused deep concern in the country, which has looked to the US for assurances about its security.

Biden is expected to call on Emperor Naruhito at his imperial palace before meeting Monday with Prime Minister Fumio Kishida, who took office last fall. Later, he’ll unveil the outlines of a trade plan for Asia that officials hope can generate wide support. And he’ll conclude his visit with a summit of the Quad collective — comprised of the United States, Japan, India and Australia — that is widely seen as an attempt to counter China’s military and economic ambitions.

Biden has sought on his trip to link the parallel sets of economic and security issues that have emerged in his discussions with leaders. His trade outline, viewed as a scaled-down alternative to the Trans Pacific Partnership trade pact scrapped by his predecessor, is expected to place heavy emphasis on resilient supply chains decoupled from Chinese parts — a message he conveyed at multiple points in Seoul.

Among the other myriad issues he hopes to raise — which include regional security, trade, the Covid pandemic and the Ukraine war — is the question of improving ties between the two countries he is visiting this week. Relations between Japan and South Korea have worsened over recent years, a combination of long-simmering historical resentments and more recent trade actions.

Biden told reporters in Seoul on Saturday “it’s critically important” the US, South Korea and Japan have a “very close trilateral relationship.”

He said the current state of the world, where autocratic regimes like China and Russia have challenged democratic norms, demands the rest of the world stick together, despite lingering differences.

“Things have changed,” Biden said during his news conference. “There’s a sense among the democracies in the Pacific that there’s a need to cooperate much more closely, not just militarily but also economically and politically.”

Doctor Who serves up ecological horror with a side of romance

Get to ‘Know your Beach’