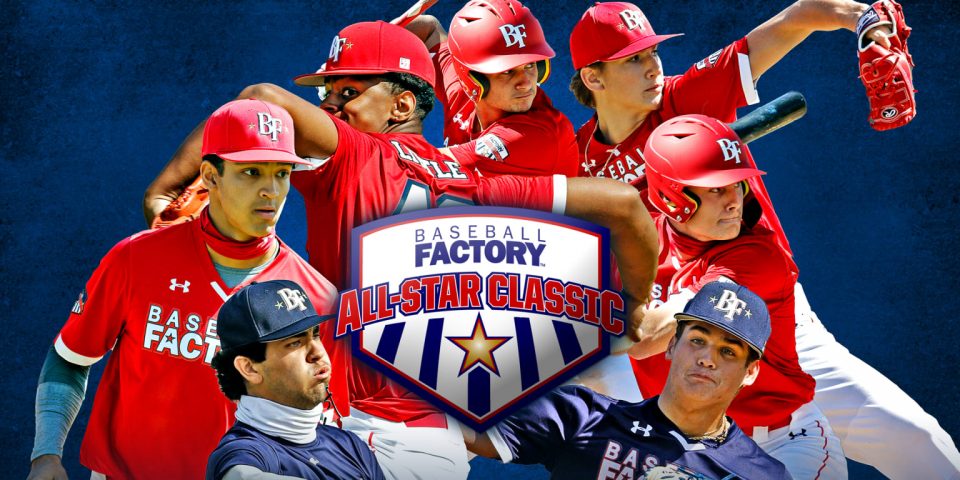 While Major League Baseball paused this weekend between rounds of the 2020 postseason, some of the best high school talent eligible for the 2021 Draft assembled in Frisco, Texas, on Sunday for the Baseball Factory All-Star Classic.
Ten of the top 15 high school prospects competed in the game and

While Major League Baseball paused this weekend between rounds of the 2020 postseason, some of the best high school talent eligible for the 2021 Draft assembled in Frisco, Texas, on Sunday for the Baseball Factory All-Star Classic.

Ten of the top 15 high school prospects competed in the game and many of them lived up to advanced billing. Other prepsters stepped up and put their names a bit more on the map as the scouting industry starts to look ahead to what everyone hopes is something close to a normal spring season in the amateur ranks. After discussions with some scouts in attendance, here’s a list of 15 players, listed alphabetically, who stood out on Sunday.

Thomas Dilandri, OF, Home School (Nev.) — The TCU commit showed off some exciting tools, with plus raw power (albeit with some swing-and-miss concerns), excellent run times and a strong arm that also fires 90-93 mph fastballs off the mound.

Carter Holton, LHP, Bendectine Military (Ga.) — Committed to Vanderbilt, Holton is a slightly undersized lefty with a lot of arm strength. He was 90-95 mph during his two scoreless innings with a low-to-mid 70s curveball. There’s some effort, leading to some reliever risk.

Gage Jump, LHP, JSerra Catholic HS (Calif.) — One of the better lefties in the class, Jump is also an undersized southpaw who really knows how to pitch. The UCLA recruit was 91-95 mph on Sunday with a mid-70s get-me-over curve and a better 80-81 mph slider. He’s super athletic and shows tremendous competitiveness on the mound.

Ben Kudrna, RHP, Blue Valley Southwest (Kan.) — The 6-foot-4 LSU recruit offers a ton of projection to his frame to go along with a 91-93 fastball, a low-80s slider and a mid-80s changeup that’s a bit firm. He has a loose arm and clean delivery, filling up the zone with all three pitches during two hitless innings (three strikeouts).

Benny Montgomery, OF, Red Land HS (Pa.) — No. 11 on our Top 15 high school list, Montgomery continues to show incredible athleticism and the ability to use his tools against good competition. He went 3-for-3 with a pair of RBIs and stolen bases, showing his strong, wiry power. The Virginia recruit is a bit unorthodox, with a little Hunter Pence in him.

Jordan Lawlar, SS, Jesuit Prep HS (Texas) — Lawlar did nothing to lose his spot as the top high schooler in this Draft class, barreling up a fastball for his triple on Sunday. Everything he does is easy and fluid, with projection to come as well for the Vanderbilt recruit.

Christian Little, RHP, Christian Brothers College HS (Mo.) — Little wasn’t in our Top 15 because of news he’s graduated early from high school and intends to head to Vanderbilt for the spring semester. But he was nonetheless one of the top performers on Sunday, striking out the side in his inning of work, with an effective, if not electric, 90-92 fastball and curveball.

Marcelo Mayer, SS, Eastlake HS (Calif.) – No. 3 on the Top 15, Mayer is the 1A to Lawlar among high school shortstops. He has as good an approach at the plate as any high schooler in the class with elite bat-to-ball skills. He can really play shortstop, with instincts and aptitude better than raw tools, kind of like Brandon Crawford.

Michael Morales, RHP, East Pennsboro Area HS (Pa.) — Committed to Vanderbilt, Morales showed a lot of starting pitcher qualities in his one no-hit inning. He struck out two with a 90-94 fastball, a mid-80s changeup and a 79-80 mph slurvy curveball. His arm works well and he throws a lot of strikes without a lot of effort.

Izaac Pacheco, 3B, Friendswood HS (Texas) — The Texas A&M recruit who comes in at No. 6 on our Top 15 had a couple of hits on Sunday, showing better contact skills to offset some of the swing-and-miss concerns that have cropped up. He has tremendous raw left-handed power and will almost certainly move to third at the next level.

Chase Petty, RHP, Mainland Regional High School (N.J.) — Yes there is some effort and reliever risk, but it’s hard to deny how electric this Florida recruit’s stuff is. Petty, our No. 5 high school prospect, was 96-99 mph on Sunday with a low three-quarters slot and plus movement. He flipped in a curve ball, a 90-mph changeup and a splitter, throwing better strikes than he has in previous showcase events.

Cody Schrier, SS, JSerra Catholic HS (Calif.) — Scouts think this UCLA commit and teammate of Gage Jump has a real chance to hit. He has excellent raw power with a projectable frame. He’s a good athlete who can run and has enough arm for short, but he might outgrow the position and move to third.

Peyton Stovall, SS, Haughton HS (La.) — He’s probably a second baseman at the next level, but Stovall is going to hit. The Arkansas commit has sneaky pop from the left side and shows an innate ability to barrel up the baseball. He has the chance to be a very good defender at second should he make that transition.

Alex Ulloa, SS, Calvary Christian Academy (Fla.) — A teammate of Andrew Painter, the top prep pitcher in the class, Ulloa got his own name on the radar by going 2-for-2 with a double and triple to go along with three RBIs and a stolen base after showing well during workouts prior to the game. He’s small, but there’s surprising power here with an aggressive approach at the plate. The Oklahoma State recruit is a sparkplug who showed good actions at shortstop.

Calvin Ziegler, RHP, St. Mary’s (Ont.) – The top Canadian in the class tossed a perfect inning, striking out two, with a fastball that touched 95 mph, a mid-80s changeup and a low-80s slider. He has a strong, compact body and will head to Auburn if the Draft doesn’t go his way.