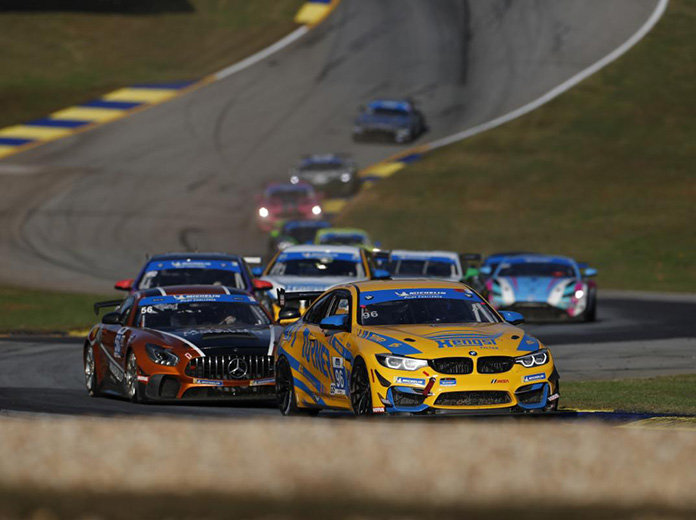 BRASELTON, Ga. – They say timing is everything, and that was certainly the case Friday in the Fox Factory 120 for the IMSA Michelin Pilot Challenge.

The complexion of the two-hour race changed dramatically with 43 minutes remaining when Mathew Pombo buried the No. 73 LA Honda World Honda Civic TCR deep into the tun one tire barrier, bringing out a full-course caution at Michelin Raceway Road Atlanta.

That had a direct impact on the overall leader of the race – dominant pole winner Tyler McQuarrie in the Grand Sport (GS) class No. 39 CarBahn with Peregrine racing Audi R8 GT4.

McQuarrie had led from the start but yet to hand the car off to co-driver Jeff Westphal by the time the pits opened with 37 minutes to go. It meant Westphal could not meet IMSA’s 40-minute minimum-drive-time requirement.

The nightmare scenario for the No. 39 left the door open for Vincent Barletta and Robby Foley to claim the win for Turner Motorsport in the No. 96 BMW M4 GT4. Foley led the final 17 laps for his second Pilot Challenge win of the season, and the first for Barletta. Foley teamed with Bill Auberlen to win in the sister No. 95 Turner BMW at VIRginia International Raceway in August.

As he’s done much of the season, Foley started the Fox Factory 120 in the No. 95 Turner car, which he handed off to Auberlen before jumping into the No. 96.

“For me, it was the restarts and trying to find a place to survive and get ready to hand it off to Robby,” noted Barletta, who started the race and drove the first 45 minutes. “Had a little contact so the toe was out a little, so Robby had to deal with that. Also pitting under the yellow with two cars, Robby has to get out of the (No.) 95 and get into the (No.) 96, and that took some time.”

“It was hectic!” exclaimed Foley. “We pitted at just the right time, and I honestly almost forgot to get into the No. 96 because we had a little drama with the (No.) 95 in the pit stop.

“We had a little bit of damage on the No. 96 that I struggled with until I learned how to drive the car. It was tough to drive, but once I knew kind of how to manage it, I knew at the end if I could get a good restart and hit my marks, they were going to have a hard race behind me. That played to my advantage and I was able to pull a little gap and just cruise on the last lap to bring it home.”

A sixth-place finish at Road Atlanta allowed Kyle Marcelli and Nate Stacy (No. 60 KohR Motorsports Aston Martin Vantage GT4) to extend their championship lead unofficially to 20 points over McQuarrie and Westphal, who wound up classified 19th in the GS class.

In the Touring Car (TCR) class, Michael Lewis made the winning pass with two laps remaining in a battle of Hyundai Veloster N TCRs. Lewis shared the winning No. 98 Hyundai with Mason Filippi for Bryan Herta Autosport with Curb-Agajanian, while Tyler Maxson and Tyler Gonzalez finished second in their Pilot Challenge debut driving the No. 27 Copeland Motorsports Hyundai.

“I had a great first stint and handed the car over to Michael, and he had an insane battle at the finish for that No. 1 spot,” Filippi said.

Lewis was happy to take over a car in excellent condition.

“Mason kept it in the hunt with clean fenders, kept it clean on the restarts, and once I started pushing, it led into those last few laps,” Lewis said. “The Michelin tires stuck well at Michelin Raceway, which is one of my favorite tracks. That was so fun – I was totally committed.

“Congrats to Tyler Gonzales and Tayler Maxson,” he added. “They were really fast, and it was hard to get around them, but we made it happen.”

Incoming TCR championship leaders Gabby Chaves and Ryan Norman finished 11th in class in the No. 33 BHA Hyundai. That allowed Filippi and Lewis to unofficially vault into the points lead, with an eight-point margin over their teammates.

Two people accused of running a drug factory in Voluntown