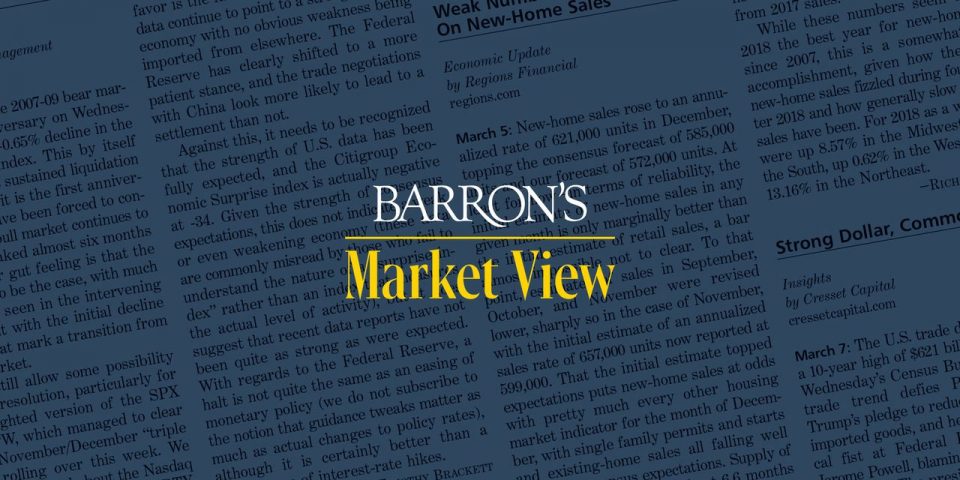 This commentary was issued recently by money managers, research firms, and market newsletter writers and has been edited by Barron’s.

Yardeni Morning Briefing
Yardeni Research
Jan. 14: The S&P 500 Financials sector is starting 2021 on an optimistic note. After just seven trading sessions in this new year, it was up 6.2% through Tuesday, and both

[GS] hit all-time highs that day. Concerns about loan losses have been replaced by enthusiasm about a steeper yield curve and a roaring stock market. Were that not enough, the Federal Reserve will allow banks to start buying back stock and increase dividends, activities it halted last year.

With the Democrats in control of the White House and Congress, expectations are high that spending to boost the economy will rise even beyond the hearty levels spent by President Donald Trump and the Republican-led Senate. The 10-year Treasury bond yield backed up to 1.15% as of Tuesday’s close, up 63 basis points [0.63%] from its Aug. 4 record low. Meanwhile, the federal funds rate has remained near zero. The backup in the bond yield may have come too late to help Q4 results, but if it holds, it should help results going forward.

With the stock market near all-time highs, the initial public offerings market is on fire, and mergers and acquisitions finished the second half of 2020 at a pace that exceeded year-earlier levels. All of that should help the large money-center banks and brokers, which profit from trading and capital market business.

Coming: A Pause That Refreshes

Market Strategy
Canaccord Genuity Capital Markets
Jan. 11: Many fear that this market environment is like the 2000’s. We don’t think so. The

valuations are near dot-com levels, equity offerings are historically high, and information technology has been the leader, but there are some very important differences.

In 2000, the real fed funds rate was historically high, corporate credit was dislocating, and financial conditions were tightening. It is totally opposite today.

Also, 2000’s high valuations were on peak earnings, as the economic cycle was ending, whereas currently we are coming off trough EPS. In our view, the market valuation expansion now is more like what took place following the 2009 low.

Our key tactical indicators suggest that the conditions are in place for a temporary correction that would set the stage for the next sustainable move higher, on the back of our fundamental thesis driven by historic liquidity fueling a synchronized global recovery.

While corrections only feel “natural, normal, and healthy” until you are in one, it is essential to remember that, if one unfolds, stimulus is in place through 2021, political uncertainty appears to be clearing, and we can see the light at the end of the tunnel for a global economic reopening as vaccinations accelerate.

[ticker: JNJ] announced progress on a single-dose vaccine and Federal Reserve Chairman Jerome Powell reiterated his support for a dovish monetary policy, yet the averages retreated.

There was some concern over what Joe Biden would say in his speech [about an additional Covid-19 economic relief package]. However, the market internals were very good. A lower S&P 500 and

with over 1,000 net advances. We have rarely seen such an extreme divergence. Our interpretation is that this is bullish.

Of Rates and Valuations

Weekly Market Update
Cresset Capital Management
Jan. 12: After bottoming last August at a historical low of 0.5%, the 10-year Treasury yield inched higher, closing the year at a postpandemic high of 0.91%. The Georgia election, which gave Democrats control of Congress, pushed the benchmark rate above 1% for the first time since March. Financial markets have feasted on a steady diet of continually lower rates. What would happen if rates were to reverse course?

Given this, a 1% rise in 10-year rates would compress the market’s P/E ratio of 23 times to 19 times. Without an offsetting increase in earnings, that would imply an 18% market decline. The good news is the S&P’s earnings yield is currently 2.1% higher than the BBB bond yield, leaving a valuation cushion, so the market could likely withstand a 1.5 percentage point rise without substantial valuation deterioration.

Near-term dynamics suggest that rates should be higher. Several forces point to higher growth ahead. Democrat control of Congress increases the likelihood of additional relief. And Americans stashed away more than $1 trillion of additional savings last year. Pent-up demand for services, travel, and live entertainment, combined with that cash, will add up to record spending in 2021’s second half. Cresset’s copper/gold model is pointing to a 2% 10-year Treasury yield.

Aging populations in the developed world further explain slowing growth and lower rates, since retirees tend to save more and spend less than their younger cohorts. Nearly 17% of the U.S. population is over the age of 65, versus 13% a decade ago. Germany’s senior set accounts for nearly one quarter of its population. Birth rates in the developed world, at 1.6 children per woman, are about half of what they were in the 1960s. While productivity gains can contribute to higher growth, they haven’t been strong enough to offset labor-force growth shortfalls.

Though near-term imbalances, including central bank interference, have contributed to interest rates being too low for economic conditions, longer-term trends suggest that rates will remain historically low. So, seemingly high equity market valuations may be justified over the longer term.

Keep Your Eyes on the VIX

(VIX) has been hovering a little too close for comfort to the pivotal 25 level. I regard 25 to be the “line in the sand” between a healthy and an unhealthy market. If VIX is rising persistently above 25, the environment is far less conducive for buying equities. Right now, however, VIX is at 22, which gives the bulls a bit of leeway in case the bears are thinking of launching another raid on the market.

January is often a volatile month, so we should expect to see at least some minor choppiness in the coming weeks. There are currently no signs from the primary technical indicators that the market is primed for a major decline, however.

To be considered for this section, material, with the author’s name and address, should be sent to [email protected].