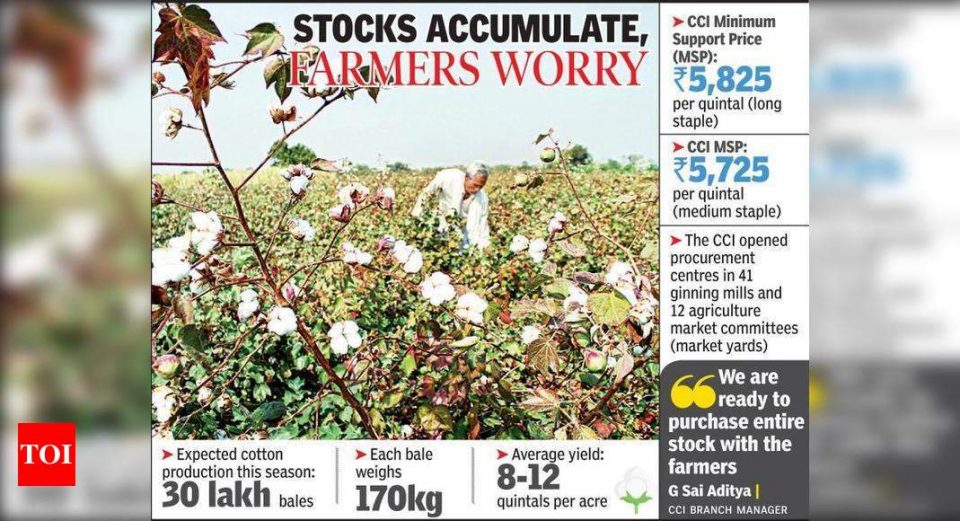 Guntur: Despite the preparedness of the Cotton Corporation of India (CCI) to pick up stocks, farmers are struggling to sell the output due to the impractical rules fixed by the marketing department. While untimely rains have already hit the quality of the crop, procurement rules are further crippling the farmers.
Sources said the marketing department has fixed a cap for procurement by the CCI keeping in view the irregularities that took place during previous seasons. In fact, the Central Bureau of Investigation (CBI) had booked cases against several officials from the marketing department and in the CCI, along with cotton buyers, for misusing the minimum support price (MSP) two years ago. Taking these instances into consideration, the marketing department came out with stringent rules for procurement of cotton.
However, these rules pose a hurdle for farmers looking to sell their stocks. As per the rules, a farmer whose name is registered in the e-crop register of the agriculture department has to visit the CCI procurement centre in person to sell the stock. “None of the family members are being allowed to transact on behalf of the farmer as the farmer has to register his thumb impression at the procurement centre,” rued R Satyanarayana, a cotton farmer. Satyanarayana said it was a practical difficulty for all farmers to visit procurement centres.
Surprisingly, the marketing department is not allowing farmers to sell more than five quintals in each spell even if the yield is around 10 quintals per acre. “This is forcing us to sell half the stock to middlemen and half to the CCI,” said another farmer S Subhani from Medikonduru village. Sources said the rule has been formulated based on the agriculture department’s assessment of total yield during the season.
The agriculture department has fixed a different average output for each district based on its soil and climatic conditions. “We have a cap on the stock to be sold by the farmers to avoid middlemen taking advantage of the MSP,” said Venkateswara Reddy, a senior official with the marketing department.
The CCI could so far pick up just 4,000 bales of cotton against the target of four lakh quintals. The state has produced nearly 30 lakh bales during the season. CCI AP region branch manager G Sai Aditya said they are ready to pick up the maximum stock from farmers if the state marketing department relaxes its rules.
previous post

Paddy procurement at MSP to begin from tomorrow