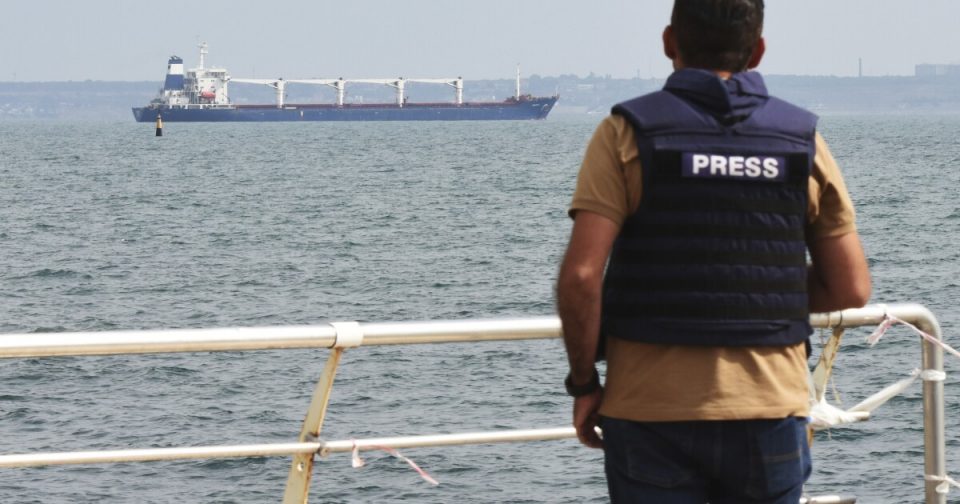 The first cargo ship to leave Ukraine since Russia invaded its neighbor more than five months ago has run into bad weather in the Black Sea and is set to arrive later than scheduled in Istanbul, a Turkish official said Tuesday.

The Sierra Leone-flagged Razoni, which set sail from the Ukrainian port of Odesa on Monday, is now expected to reach Istanbul early Wednesday, according to Turkish Rear Adm. Ozcan Altunbulak, a coordinator at the joint center established to oversee the grain shipments.

Russian, Ukrainian, Turkish and United Nations officials are to inspect the ship after it anchors in Istanbul. The inspections are part of a U.N.- and Turkish-brokered deal to shift Ukrainian grain stockpiles to foreign markets and alleviate a mounting global food crisis.

Altunbulak said “preparations and planning” were continuing for other ships to leave Ukraine’s ports, but he did not provide details.

As part of the July 22 agreement on shipments, which include exports of Russian grain and fertilizer, safe corridors through the mined waters outside Ukraine’s ports were established.

The situation in the Black Sea remains tense, however, and Ukrainian President Volodymyr Zelensky urged international partners to keep a close eye on Moscow’s compliance with the deal.

At Odesa, 16 more vessels, all blocked from leaving since Russia’s invasion Feb. 24, are waiting their turn to set sail, with others to follow, Ukrainian authorities say.

The more than 26,000 tons of corn on board the Razoni, destined for Lebanon, will make barely a dent in what the World Bank last week called “rising food insecurity” across the world.

But the restart of shipments from Ukraine and Russia, which are major world suppliers of wheat, barley, corn and sunflower oil, raised hopes that the situation could improve. The fertile Black Sea region has long been known as the breadbasket of Europe.

The shipping developments came against a backdrop of continued fighting, especially in southern and eastern Ukraine.

Moscow’s forces stuck to their familiar pattern of bombarding areas they don’t hold, with Ukrainian officials reporting that the Russian shelling killed at least three civilians in eastern areas overnight.

In the Donetsk region at the forefront of the Russian offensive, the bombardments targeted towns and villages, especially Bakhmut, which has taken the brunt of recent shelling.

Donetsk Gov. Pavlo Kyrylenlo said that “the Russians are leveling Bakhmut with a massive barrage from the ground and from the air.”

“The shelling of Bakhmut is continuing around the clock, leaving civilians little chance to survive,” Kyrylenko said in televised remarks.

The U.S. said it was sending an additional $550 million worth of military aid to Kyiv. Defense Secretary Lloyd J. Austin III said in a tweet late Monday that the package included 75,000 rounds of artillery ammunition and more ammunition for the American-built HIMARS multiple-rocket launchers, which have given Ukrainian forces an advantage on the battlefield.