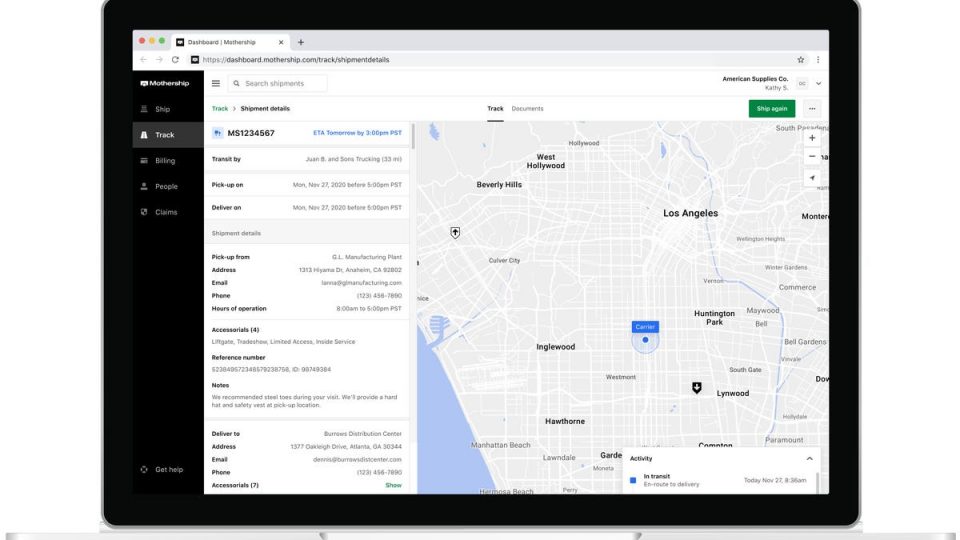 Mothership, a software company that makes a platform for short-haul freight shipping operations, is looking to grow its team and expand its global reach after moving to Austin last year.

The company, which was founded in 2017 in Los Angeles, is focused on last-mile shipping by connecting companies and their freight to nearby truckers.

The company recently raised $76 million, and plans to use the funding to expand its platform and add to its employee team.

Mothership’s platform works by matching independent truckers with companies who need products — such as apparel, food, beverage, retail or hardware —  delivered short distances that same day. Businesses can book one or hundreds of shipments on Mothership’s website, or integrate them directly into the system.  The company’s software then dispatches these shipments to local truckers.

Mothership’s CEO Aaron Peck, who previously worked in the manufacturing sector, said he came up with the idea to address an ongoing problem in the shipping industry. While traditional methods for long-distance shipping tended to work fine, he said, once freight reached the local level it was difficult to get anything done.

“Where I was left to my own was in this local space. I would have to essentially become my own broker and broker these carriers out myself,” said Peck, who also founded Los Angeles-based logistics platform Skurt. “That experience of me being a shipper and struggling to get this done inspired me to use technology to solve this problem.”

Mothership now operates in 26 metro areas, though not yet Austin, with customers including DoorDash, Everlane and Harbor Freight.

“We are moving more freight with fewer trucks, meaning we’re taking trucks off of the road. Instead of having trucks drive around with air on the truck because there’s just nothing optimally routed for that, we’re making sure to fill that space in real-time,” Peck said.

“This is a people business, it’s all about hiring. We’re going to use the capital predominantly towards that,” Peck said.

Peck said while the company has no office in Central Texas, it considers Austin to be its home base. Peck and the majority of the senior leadership team are in Austin, and he said the company is looking to mostly add Austin-based employees.

“Austin has proven to be this incredible well of talent. And so we feel really lucky to be in a place where the best talent also happens to be for the most part right where we are,” Peck said. “We think that this place is a magnet drawing in talent from the rest of the country.”

The Cost of Insuring Black Sea Shipping Is Out of Control