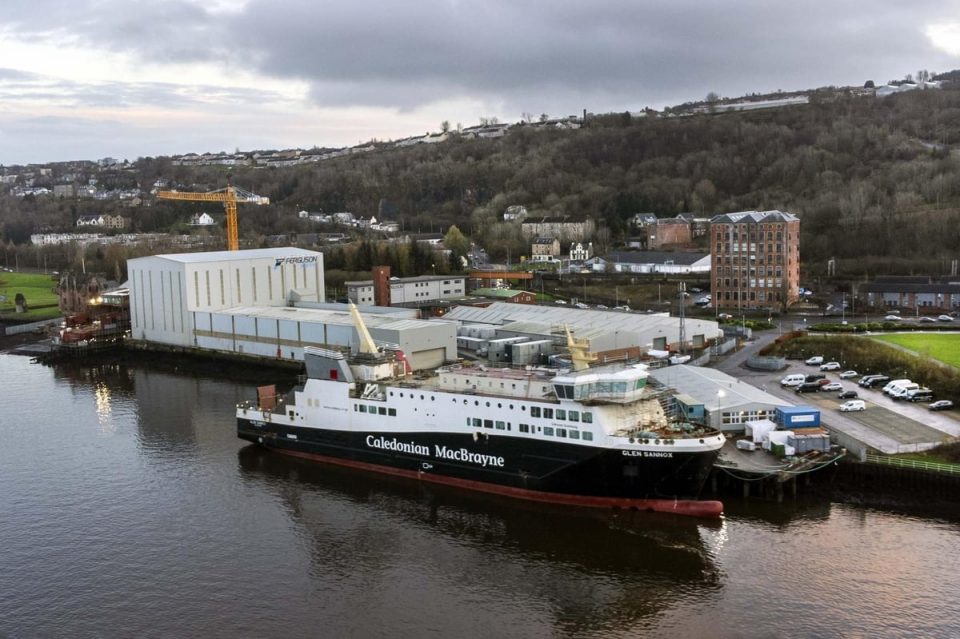 Critics demanded the Scottish Government call in the police over the allegations of preferential treatment in favour of the Port Glasgow shipyard, since nationalised, which they said was “beyond a scandal, it’s a crime”.

The two ships, the Glen Sannox and the un-named hull 802, are more than five years’ late and more than £150 million over-budget after years of controversy, management failings and nationalisation of the shipyard.

Ferguson Marine ferry deal ‘may have been rigged’, documentary claims

Mr Swinney’s announcement of the investigation follows publication of allegations by a BBC Disclosure documentary that Ferguson Marine was given sight of a more than 400-page document setting out the technical requirements for the vessels.

The interim finance secretary said the yard’s possession of the document was not “appropriate”, agreeing the allegations raise “issues of concern”.

Ministers and CMAL said they had no record of how the document was passed to the yard, with the BBC reporting a design consultant was the source.

Other allegations within the documentary include the shipyard being allowed to change its design midway through the process, making its pitch almost £10m cheaper, and having a confidential meeting with CMAL, an opportunity allegedly not extended to other bidders.

CMAL, which controls ferry infrastructure in Scotland, defended its position and claimed it had found no evidence to support the claims of preferential treatment.

It said the change to design was based on a clarification in the size of a gas tank and added the “technical clarification meeting” was “an ordinary and iterative question-and-answer process where ambiguities within lengthy and complex documents are resolved”, with competitors having digital versions of the same meeting.

Responding to an urgent question in Holyrood, Mr Swinney said ministers were “not aware of any impropriety” in the procurement of the vessels, but stressed they took the claims “extremely seriously”.

He said: “I have committed already that ministers would explore what further steps the Government needs to take to ensure that all questions about the fairness and appropriateness of the tendering process are properly, independently, investigated.

“I can confirm that the Permanent Secretary, at the request of ministers, has already pro-actively been in contact with the Auditor General to discuss this matter.

“The Auditor General informed the Permanent Secretary that Audit Scotland will be looking at the substance of the allegations raised around procurement by the programme before deciding if further audit work is required. I welcome this.

“Scottish Government, CMAL and Ferguson’s all commit to fully supporting that exercise.”

Graham Simpson, who secured the urgent question, criticised the fact the information had not come to light earlier.

The Scottish Tories transport spokesperson labelled it “beyond a scandal, it’s a crime”.

“Special treatment that might have broken laws which could open the Government to legal action.

“This is a scandal. It looks like corporate corruption and the fact we are only finding out now means it’s been a cover-up as well.”

A spokesman for Audit Scotland said the body would look at the substance of the allegations, adding auditor general Stephen Boyle had the “full support” of Permanent Secretary John-Paul Marks.

“The BBC Disclosure investigation raises serious questions about the use of public money,” the spokesman said.

“We will be looking at the substance of the allegations raised around procurement by the programme before deciding if further audit work is required.

“The Auditor General informed the Permanent Secretary of his intentions earlier today, who offered his full support in accessing any materials we need, should any further audit work be required.”

All episodes of the brand new limited series podcast, How to be an independent country: Scotland’s Choices, are out now.

US, Australia, Brazil call for joint consultations at WTO on India’s food procurement