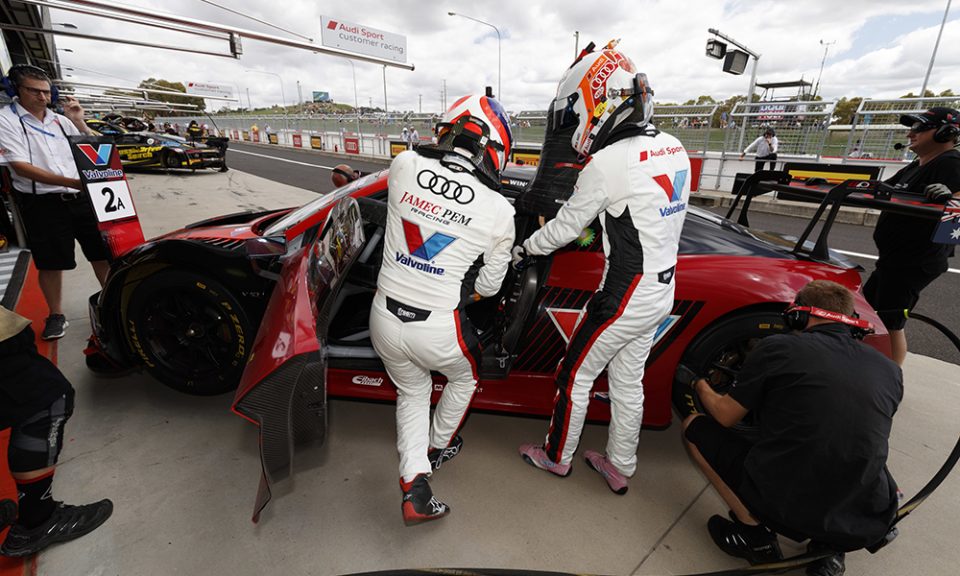 Audi has confirmed a nearly full-factory lineup for its three works-supported R8 LMS GT3 Evos that will take part in next month’s Liqui-Moly Bathurst 12 Hour.

The German manufacturer has aligned with Melbourne Performance Centre, which will field all three of the mid-engined sports cars under the Audi Sport Team Valvoline banner for the first time.

Eight of the nine seats have been filled by Audi factory drivers.

Dries Vanthoor and Frederic Vervisch will team up with Christopher Haase in one car, with Mattia Drudi in a second Audi alongside Kelvin van der Linde and inaugural Intercontinental GT Challenge powered by Pirelli champion Markus Winkelhock.

Newly named Audi factory driver Mirko Bortolotti, meanwhile, is set for his Bathurst debut in the team’s third entry, which will be shared by Christopher Mies and Australian veteran Garth Tander, who is fresh off winning the Australian Endurance Championship in an Audi.

“That’s three very competitive cars, any of which is capable of a podium finish, and that will be our focus.

“I don’t like to use the word luck, but we might need a little bit to fall our way this year. We’ve been so close the last couple of years – qualified strongly, led laps, but just little things you could never account for have kept us from that elusive podium.

“But I think with the roster of drivers we have this year, and off the back of a very successful national campaign in 2019, we might be able to change all that this year.”

The Feb. 2 enduro will mark Audi’s 10th appearance in the race, dating back to its winning debut in 2011.

“Our tenth appearance at Bathurst marks a very special occasion,” said Head of Audi Motorsport Chris Reinke. “In 2011, 2012 and 2018, we won there with three different teams.

Audi enters its fifth season of IGTC competition after losing out on the manufacturers’ title for the first time in 2019 to Porsche.

At least eight manufacturers are expected to be registered for the globe-trotting championship, which will again feature five rounds on as many continents.

John Dagys is the founder and Editor-in-Chief of Sportscar365 as well as the recently launched e-racing365 Web site for electric racing. Dagys spent eight years as a motorsports correspondent for FOXSports.com/SPEED Channel, and contributes to other publications worldwide. Contact John