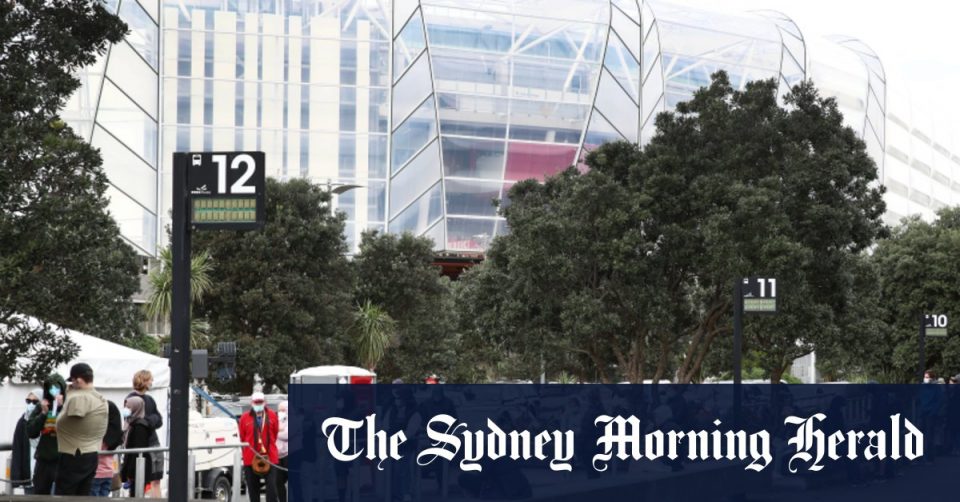 And New Zealand health officials are still investigating a possible Victorian link to the virus outbreak, despite a strong denial from the chief executive of the Americold cold storage company that a shipment from its Melbourne warehouse might be responsible for the Auckland cluster.

The 13 new infections takes the total number of active cases in New Zealand to 69, which comprises 49 in the community and 20 in managed isolation facilities.

The 12 new community cases announced Sunday are all linked to the existing outbreak and none of the infected people had travelled outside of Auckland.

Director-General of Health Ashley Bloomfield said three of the 69 people who currently have COVID-19 are now in hospital receiving treatment, up from one on Saturday, and that 1322 of 1536 close contacts of the 69 cases had been in touch with contact tracers.

Bloomfield said surface swabs from an Americold facility in Mt Wellington, Auckland, where the earliest known case occurred, were currently being processed with the results hopefully delivered later on Sunday.

Asked if Americold was still the best working theory as the source of the new outbreak, Bloomfield said “it seems to be as a workplace, the case that has the earliest onset date [July 31] of symptoms is an Americold worker”.

“So we are doing the environmental testing, we are also, it maybe a long shot, but we are working with our Victorian counterparts to look at the genome sequencing of the cases that they have had that worked in an Americold facility there,” he said.

Bloomfield conceded “there may well be no link, but it’s one to exclude. It may well be that we still don’t find the exact route of transmission for that first case, but we are not leaving anything to chance.”

Americold is a global chilled food storage company that operates sites across New Zealand and Australia, including in Melbourne, Sydney and Perth.

Winnall said “that site at Melbourne has never shipped any freight to the Mt Wellington facility according to our records”.

Victorian Chief Health Officer Professor Brett Sutton said on Sunday that he had “heard that the operator of Americold in Melbourne has said definitively that no freight went to New Zealand”.

While there is no confirmed link between the New Zealand and Melbourne cases, the Department of Health and Human Services Victoria (DHHS) said it was aware of four cases linked to Americold in Laverton North, a rural-urban fringe suburb of Melbourne.

The cases occurred three weeks ago and Winnall said there had been no transmission inside the Melbourne facility.

The link to the Melbourne facility is just one of the avenues being examined by New Zealand officials as they scramble to determine the source of the outbreak.

NZ Health Minister Chris Hipkins said that 23,682 tests were conducted on Saturday and more than 63,000 tests had been done in the last three days.

However, the high volume of testing has slowed down the processing and return of results from 24 to 48 hours because of demand.

“If you are well, please don’t get a test as you will potentially be slowing things down for everyone else,” Hipkins said.

He also urged Kiwis to be cautious about false information being spread on social media, referring to a “vile slur” that a woman who now has the virus had contracted it by sneaking into a managed isolation and quarantine facility.

Hipkins said that travel into and out of Auckland remained heavily restricted to stop the possible spread of COVID-19.

In the wake of the outbreak, New Zealand First leader Winston Peters, who is also Deputy Prime minister to Ardern and foreign minister, called for the election to be delayed.

“Voters need to be able to hear from all political parties about their COVID response and other policies. That is fair. But until Auckland’s alert level comes down the playing field is hopelessly compromised,” he said.

“New Zealand First wrote to the Prime Minister on August 14 to convey our concerns. We did so sadly because it is so obviously apparent that the COVID outbreak is compromising our ability to hold a free and fair election on September 19.”

“We are releasing our letter of August 14 for the sake of transparency, and because we believe the Governor General of New Zealand needs to know that the majority in the House of Representatives favours an election delay.”

Peters’ party is in coalition with Ardern’s Labour Party and holds five ministries. While the Prime Minister alone makes the decision on when to call an election, the comments from her coalition partner are significant and will ramp up pressure to delay the poll.

The outbreak in Auckland has forced the city back into a stage three lockdown for two weeks. Stage three restrictions mean residents of Auckland must stay home unless they are going to work, accessing essential services or exercising. Hospitality and retail businesses can only trade online and provide takeaway meals.

The rest of New Zealand has been placed under stage two restrictions which allow people to go shopping, meet with family and friends in groups of up to 100 but social distancing must be maintained.

James Massola is south-east Asia correspondent based in Jakarta. He was previously chief political correspondent, based in Canberra. He has been a Walkley and Quills finalist on three occasions, won a Kennedy Award for outstanding foreign correspondent and is the author of The Great Cave Rescue.

‘It was said’ – Quotations worth remembering – Potato News Today