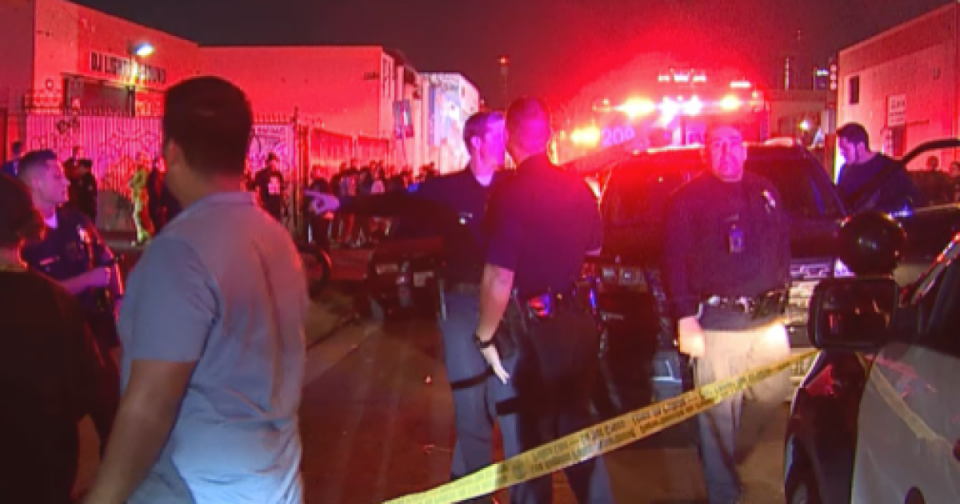 At least six people were shot at a party in a warehouse district in downtown Los Angeles early Sunday, police said.

The shooting occurred about 1:15 a.m. at an outdoor party attended by around 200 people in the 1100 block of 11th Street, police said.

“There was an argument that happened at a party, a fight ensued, and the suspect produced a handgun,” said Los Angeles Police Officer Mike Lopez.

Six people were shot, three men and three women, he said. All six victims were taken to a local hospital for treatment, one of them in critical condition, Lopez said.

The gunman remains at large, he said.

James Mahomes, 58, said he was lying under a tarp nearby when he heard gunshots. Mahomes said he heard three or four popping sounds followed by the screeching of tires and people screaming, “Go! Go! Go!”

The shooting occurred in a parking lot near a building with the name DJ Lights and Sound in a heavily industrial street lined with warehouses and car stereo businesses. Video recorded by NBC4 showed a chaotic scene with dozens of partygoers standing around as paramedics and police responded.

Investigators remained at the scene early Sunday gathering evidence. Investigators were seeking video on Sunday from businesses on 11th Street. They have asked for anyone with information about the shooting to contact Operations Central Bureau detectives at (323) 846-6556.

The 11th Street shooting wasn’t the only major outbreak of violence in downtown over the weekend.

Shortly after midnight on Saturday, four men were shot in the 800 block of South Spring Street at a party that was attended by “numerous people,” Lopez said.

All four victims were taken to local hospitals and listed in stable condition, he said.