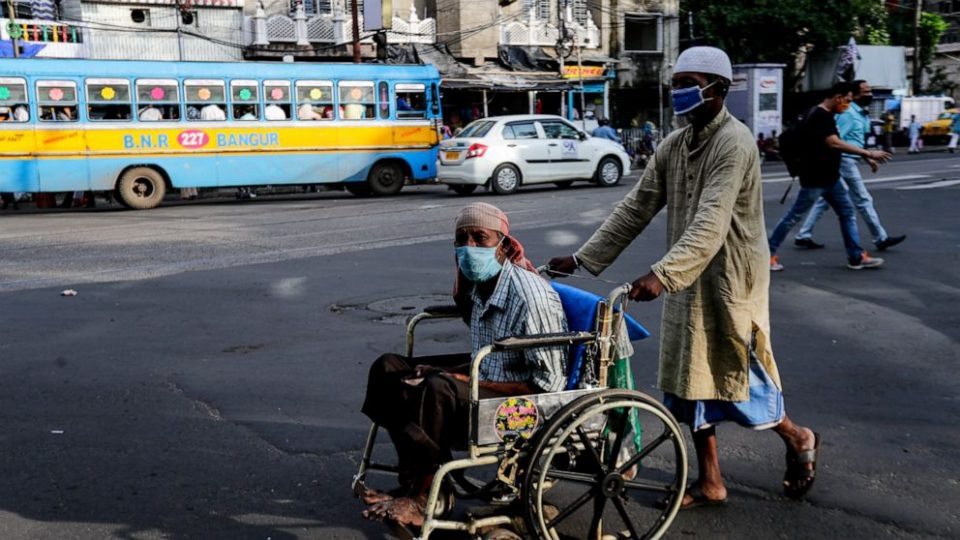 Sri Lanka says more than 300 garment factory workers have been infected with the coronavirus, days after reporting its first community transmission in two months

The health ministry said 321 cases have been identified in the factory cluster after the first patient was diagnosed at a hospital two days ago.

The outbreak in the suburbs of Sri Lanka’s capital, Colombo, was identified despite claims by the the government that it has successfully controlled the virus’s spread.

Trying to contain the outbreak, the government imposed a curfew in two suburbs where most of the patients live, closed schools and universities, and imposed restrictions on public transport.

For more than two months, Sri Lankan health officials have been saying that they have prevented community spread of the virus and that patients being reported belonged to two known clusters.

In other developments in the Asia-Pacific region:

— India has registered 61,267 new coronavirus cases in the past 24 hours, its lowest number of daily infections since Aug 25, raising the country’s total reported cases to nearly 6.7 million. The Health Ministry on Tuesday also reported 884 deaths in the past 24 hours. The confirmed death toll now stands at 103,569. India, the world’s second most affected country, has been reporting the highest single-day increases in the world for nearly 45 days. The last three weeks have seen a gradual decline in its reported infections.

— Philippine Airlines has called on its employees to apply for voluntary separation as part of a retrenchment plan that may affect up to 35% of its 7,000 workers. PAL said it resorted to furloughs and flexible working arrangements at the height of the pandemic to preserve jobs. But it is operating only 15% of its normal flights and says collapsing demand and ongoing travel restrictions make retrenchment inevitable. The retrenchments would involve voluntary and mandatory steps to be carried out in the remaining months of the year, PAL said. It assured employees of fair treatment. PAL, one of Asia’s oldest commercial airlines, is among the largest Philippine companies reeling from COVID-19. The disease has infected nearly 325,000 Filipinos, the highest number in Southeast Asia, and caused 5,840 deaths.

— South Korea has reported 75 new cases of the coronavirus as infections steadily rise in the greater capital area. The figures released Tuesday by the Korea Disease Control and Prevention Agency brought the national total to 24,239, including 422 deaths. At least 36 troops have tested positive at an army unit in Pocheon, north of Seoul, while 14 other cases were tied to a hospital in nearby Euijeongbu. There’s concern that infections will grow in the coming weeks due to increased travel during the five-day Chuseok harvest holiday that ended Sunday.

— Japan and South Korea have agreed to resume business travel between them starting Oct. 8, according to the Japanese Foreign Ministry. South Koreans will be able to enter Japan for business and conduct work but will be required to undergo a 14-day quarantine after entry, the ministry said in a statement Tuesday. South Korea has reported slightly more than 400 deaths from the coronavirus, while Japan has confirmed about 1,600. Japan has imposed an entry ban on people from many countries because of the pandemic. The ban has been gradually relaxed, including for travelers from Thailand, Singapore and Vietnam, although a 14-day quarantine is required.

Arrival to set up its first U.S. EV factory in South Carolina