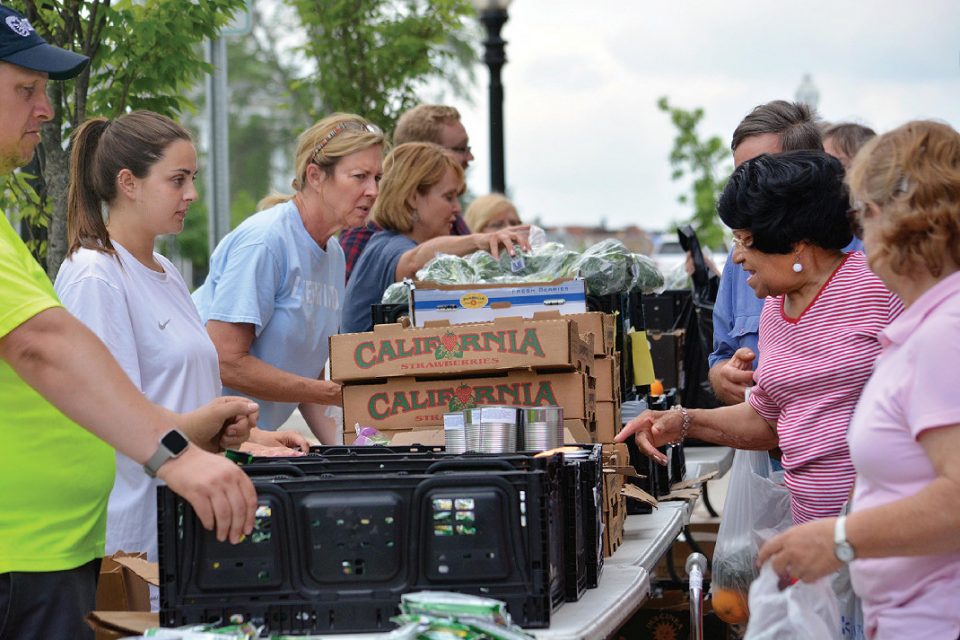 A year after an EF-3 tornado brought destruction to parts of Jefferson City, Cole County and Miller County, the group organized to help residents recover continues its work.

The Long-Term Recovery Committee continues to meet weekly, said Ann Bax, president of the United Way of Central Missouri who co-chairs the committee.

Catholic Charities of Central and Northern Missouri is the agency that took the lead on long-term disaster case management for tornado survivors.

“Oftentimes, case management doesn’t start until six to seven months after a disaster,” Bax said. “We knew this would not be a sprint, but a marathon. Others who had been through disaster recovery had told us the journey could take two years or longer to return every household to normal. I didn’t want to believe that, but it’s playing out that way.”

Bax said 659 households in Mid-Missouri registered for aid from tornado and flooding damage — 498 in Cole County and 161 in Miller County. A household could include one person or multiple people.

“It really has played out that way,” she said. “We’re still immersed in case management, and it’s a slow process. They have to apply to FEMA, and that’s not a short process. The FEMA disaster declaration was issued on July 9, and people had to register by Sept. 9. It’s a very stringent process, and people possibly could have to reapply.”

Not everyone who has applied for FEMA aid has received it.

Of the 659 households that applied for FEMA aid, “some did not receive assistance,” said Alissa Marlow, director of community services at Catholic Charities of Central and Northern Missouri.

Ineligibility for aid might have been for a number of reasons, Marlow said.

“They might have not provided the correct documentation, they might have not lived at the address (landlord vs. tenant), their insurance covered what was damaged, or maybe they were not impacted by the disaster,” she said. “Households had the opportunity to appeal their FEMA decision, but at this point, if they have not appealed it, I am afraid it is too late to receive any funds from FEMA.”

An estimated 159 households “could still need some sort of disaster case management services,” she said.

To date, $717,368 has been donated to the United Way of Central Missouri and Long-Term Recovery Committee partners — The Salvation Army, Samaritan Center, Common Ground, Catholic Charities and Central Missouri Community Action — to aid in tornado recovery.

More than 50 percent of those funds — $374,582 — has already provided short-term and intermediate support to disaster survivors to help them recover.

“Without a doubt there are many additional health and human service agencies, churches and organizations that received financial support for disaster survivors — so in reality the amount of financial support spent to date certainly exceeds that amount — and for this amazing support we are grateful,” Bax said.

The remaining funds donated through the United Way of Central Missouri Disaster Recovery Fund are being used to support long-term disaster recovery needs. Those funds are vetted through case management by Catholic Charities and brought to the committee for oversight and approval.

Disaster response best practices call for Long-Term Recovery Committee resources to be the last resort for disaster survivors once other community resources have been depleted.

In addition to financial assistance, Bax noted the large amount of material goods donated after the natural disasters and how they continue to help survivors.

Initially, the items requested were water, cleaning supplies and personal care items. Then they moved to recovery items.

“Many donated items came in organically thanks to the wonderful generosity of our community and people and organizations outside of our community,” Bax said. “Additionally, the Adventists leveraged their partnerships around the country. One large donor was Goods 360, which donated four tractor-trailer loads of items such as kitchen items, mirrors, televisions, trash cans, cleaning supplies, baby cribs and fans.”

The Long-Term Recovery Committee has carved out some money to help tornado survivors if they have been affected again by the coronavirus pandemic.

“Since the COVID-19 emergency began, we were very concerned about how that would impact those affected by the tornado and flooding disasters, even those who had their cases closed,” Bax said. “So staff began reaching out to survivors and checking in with them. When we started, most were appreciative of the call and many felt OK. However, all voiced concern about the future and didn’t know what the next month would look like.”

Mental health remains a focus in that continued recovery.

“We’re going to have to continue to address mental health because COVID exaggerated that,” Bax said. “Show Me Hope has canvassed the disaster-impacted areas and continues to do that.”

“We have so much to be proud of and so much to celebrate as we look back over the last year, but there is still much work to be done,” Bax said.