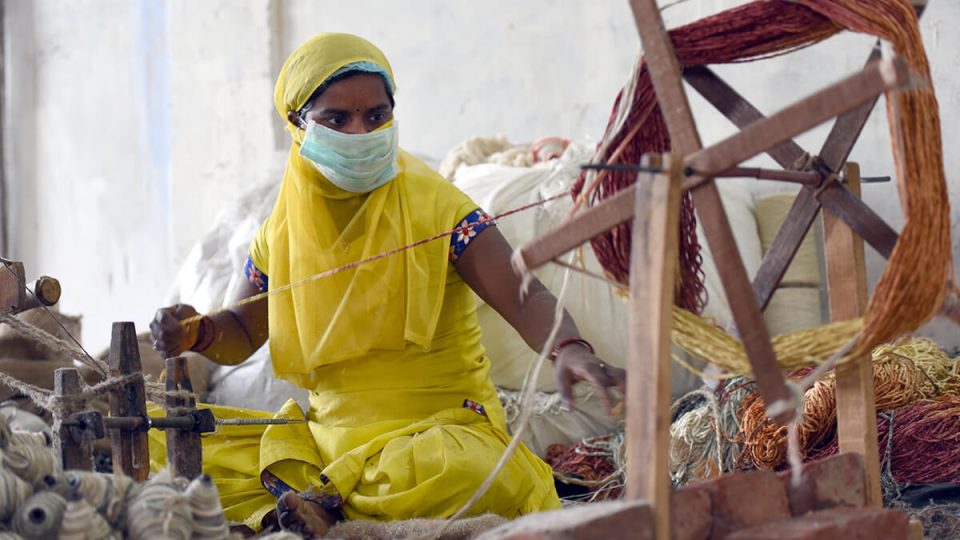 In one weekend, Mostafiz Uddin’s world changed. The denim factory owner in Bangladesh last Saturday learned that a handful of brands were putting their orders on hold. That kind of move puts Uddin and factory owners like him in a tough spot; he’d already bought materials and had workers to pay. On Monday — after a number of governments in the US and Europe ordered businesses to close their doors — things got worse. Emails from more brands flooded in, along with dozens of phone calls from peers dealing with the same shock. “Don’t ship the goods. That’s the thing we are hearing from everybody,” he says.

It’s standard practice for brands not to pay for products until after they’re shipped. When an order is put on hold or cancelled, payments are also held or cancelled. That leaves suppliers on the hook for both their workers’ salaries and, because they buy their materials outright, for what they owe their own suppliers. Without revenue coming in or much cushion in their budgets, factory owners like Uddin may be forced to cut jobs. The pandemic has already prompted tens of thousands of layoffs and job suspensions, but millions more could be at risk in countries like Bangladesh with little access to healthcare and no social safety net. (Although it’s unclear how he’ll manage not to, Uddin himself says he refuses to cut jobs.)

The impacts of Covid-19 are global and pervasive and the fashion industry is no exception; luxury is bracing for a decrease in sales of over €30 billion, Nike for a $3.5 billion drop in the fourth quarter, and Gap already lost $100 million just in Asia and Europe, before the outbreak really hit North America, its biggest market. But the pandemic and its ramifications leave the world’s most vulnerable exposed to greater, more profound risks; that includes the millions of people who make our clothes in China and Bangladesh, the world’s top two exporters of garments. Apparel manufacturing is a major economic driver and source of employment there as well as other nations, such as Cambodia and Pakistan.

A textile worker in India.

Advocates for fair labour, women’s empowerment and sustainable fashion argue now is the time for the industry to step up to support the people who keep its engines running.

“We all need to focus on our own employees first, but your due diligence is to influence your suppliers. We need to think about the most vulnerable people,” says Kate Larsen, a former Burberry executive and founder of social enterprise advisory SupplyEsChange.

Vulnerability in the supply chain

While Covid-19 is just starting to be detected in Bangladesh, the economic ramifications of the global pandemic are already being felt there and in other garment manufacturing countries, in the form of layoffs and declining tourism, for instance, from Cambodia to China and likely Ethiopia and beyond. There’s widespread concern that the effects will ramp up quickly as the crisis worsens, with consequences both for people’s livelihoods and for their immediate physical health.

“If workers are laid off, if they don’t get their full month’s wages, that will be a real crisis for them,” says Kalpona Akter, executive director of the Bangladesh Center for Worker Solidarity.

With the added threat of Covid-19, the potential direct impacts on health will only exacerbate those concerns. Most workers don’t get paid sick leave and can’t access basic medical care. Bangladesh, like many manufacturing countries, does not have the healthcare infrastructure needed to deal with a pandemic of this scale. Syed Hasibuddin Hussain, project manager for Mapped in Bangladesh at BRAC University, says a lack of capacity compounds the issue of affordability. The country of nearly 170 million people has a total of 500 ICU beds. “Even the most affluent people of Bangladesh will not be able to get any treatment,” he says.

Urban areas don’t have the infrastructure even to allow social distancing, and most people lack the resources to do much advance preparation for a pandemic. “From here, we can see there’s a huge line in [Western] superstores. People buying food, stocking up,” says Akter. “People in the production countries, like our country, they don’t have money to stock food.”

Given the unprecedented nature of the current crisis, there’s no established set of best practices for brands to follow.

To assuage effects on manufacturing partners, brands could uphold contracts and buy the products they already committed to buying, and pay on time for them. “Bangladesh operates at the minimum of profit margin. Two or three order cancellations and the factory goes bust. With delay of shipment, how are they going to pay the salary?” says Hussain.

For Uddin, it’s basic ethics. With less of a profit margin than the brands have, he has no plans to delay payments to his own suppliers or his 2,000 workers. Brands that talk about partnerships and collaborations — clients that include familiar global names, Uddin says — should be expected to hold up their end of the deal. Instead, orders have been delayed or cancelled with no room to negotiate or discuss.

Rubana Huq, president of the Bangladesh Garment Manufacturers and Exporters Association, says that over three hours on Tuesday, $10 million in orders were cancelled across 20 factories. “Most brands are putting the orders indefinitely on hold and cancelling. They are also cancelling orders that are scheduled to be shipped now. For them it’s a question of the survival of the businesses, for us it’s the survival of our 4.1 million workers,” she says.

If things keep up, Uddin wonders where all the inventory will go — and worries it will become a fire hazard. One brand told him on Saturday not to ship an order of 30,000 pairs of jeans, which he was set to ship that day. As those pile up, so do his safety concerns.

Advocates want to see brands go beyond the bare minimum; some have floated the idea of a collective fund to support workers as they navigate the growing impacts of Covid-19. Akter says that’s something brands should be contributing to because they have more wiggle room in their budgets, while suppliers operate on razor-thin margins.

“If we say, ‘Who gets the bigger piece of the pie?’ It is the brands, so the brands should take responsibility. This is the worker who makes them a profit,” she says. “This is the time for brands to show not only the responsibility, but also the generosity, that these people need.”

Ayesha Barenblat, founder of Remake, a California nonprofit focused on sustainability and gender equality in fashion, is concerned about how smaller brands focused on ethical and sustainable production will weather this storm — which in turn could also threaten the livelihoods of their own workers, who in many cases have benefited from the types of improved working conditions that organisations like hers fight for. Consumer demand for such products has been increasing, but if consumers stop buying clothes all together, the smallest brands may be at greatest risk.

Designer Rachel Faller is worried about the future of her ethical and zero-waste company Tonlé, as wholesale buyers increasingly postpone or cancel orders they placed months ago. She understands the buyers didn’t see the coronavirus coming, but it puts her in a tight spot. “I’ve already paid people to make those products,” she says. “I built this business with a lot of these makers, I consider it their business as much as mine.”

Vogue Business reached out to nearly a dozen brands — including Nordstrom, American Eagle, VF Corporation, PVH Corp, Levi’s and Target, which are all brand partners of HERproject, an industry initiative to “empower low-income women working in global supply chains” — to ask what they’re doing to support supply chain workers amidst the Covid-19 crisis. While a few responded with their own employee practices, none addressed the question about supply chain partners. LVMH also did not respond to a question asking if the hand sanitiser it’s making in its perfume and cosmetics factories will be made available to its suppliers.

The pandemic is demonstrating what happens when massive industry wide pressure is put on fashion’s supply chains. For future protection, Larsen encourages suppliers to use the Better Buying platform, which encourages retailers and brands to adhere to their contractual agreements, preventing the risks that Uddin and others are now facing. It also allows suppliers to rate the purchasing practices of the companies that buy from them; Better Buying is now surveying suppliers on how their businesses and workers have been impacted by Covid-19.

“This survey will not only cover poor purchasing practices that are exacerbating suppliers’ difficulties, but also any best practices their customers have implemented so these can be shared and adopted more broadly,” says president and co-founder Marsha Dickson. The organisation will use the data to build an “evidence-based guideline for brands and retailers to ensure their purchasing practices support sustainable partnerships with suppliers during these challenging times.”

Faller understands the hardships that retailers, especially independent ones, are likely going through. She hopes the whole industry can view the current crisis as a collective problem while remembering who is most vulnerable. “I don’t want to minimise what people are going through in the US, but… workers in these factories are going to suffer much more than employees at the company level, and that should be taken into consideration,” she says. “We are all interconnected. We all do depend on each other, and we need each other to all succeed.”

Uddin has a similar outlook. He doesn’t blame his clients for why they’re adjusting orders, but he thinks there has to be a better way to approach the problem than sending impersonal emails with no invitation to discuss possibilities or potential problem-solving.

“I respect the problem, but I also have a problem. It’s our problem. It’s a whole planet problem, it’s a whole industry problem,” he says. “We talk about responsibility, partnership, cooperation, collaboration. Where have those words gone now?”

To receive the Vogue Business Sustainability Edit, sign up here.

Comments, questions or feedback? Email us at feedback@voguebusiness.com.

More from this author:

As fashion churns out more ‘sustainable’ goods, why is so much made from plastic?

What the food industry can teach fashion about sustainability