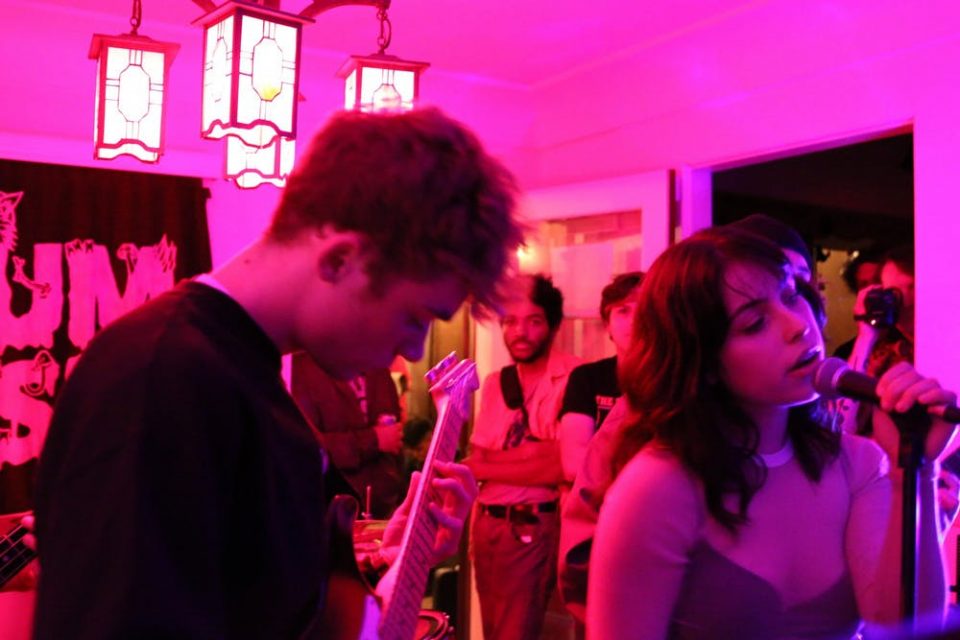 Arriving at the Old Factory & Scheme Scumfest, attendees saw that, despite the fact that Scumfest was held in a residential neighborhood, youth art and music in Tucson are thriving.

According to Vuke Fernandez, being “scum” is something to be proud of.

“A lot of what punk has been started on is working class people,” Vuke Fernandez said. “That’s a lot of the time what the music is all about. Just kind of a dis-ownership of like, f*** it, I’ll be scummy all day.”

Vuke Fernandez cited his passion for the local music scene as one of his inspirations to organize the show, along with an art and music collective by the same name.

Vuke Fernandez intended the old factory portion of the event’s name to reflect their original location: an old factory. However, due to issues with obtaining a permit for the event, Vuke Fernandez was left with the aforementioned location issue.

According to Vuke Fernandez, there were not as many music venues anymore and that is why he wanted to host a music show. He was further motivated when a local do-it-yourself venue called The Scheme was shut down.

“[The Scheme] got red-tagged. So after that happened, me and my friend Toby Chivers had been wanting to have a show for a while,” Vuke Fernandez said. “This would be a perfect time, like, everyone is scrambling to find a good spot to have shows for these good bands to perform. Super bummed the original location didn’t work out.”

For some, the smaller location has a special charm.

One of the local bands who played at the event, The Sinks — Jackson Kimball, Gabe Noriega and Harrison Cable — encouraged onlookers not to judge house venue music shows by their appearance.

Noriega, The Sinks’ bassist, said, “From the outside I can see how you could look back and it’s like a part at a house, but when you’re here you see the community and the artists that are showing.”

Lead vocalist and guitarist Kimball said, “Their art is a big example of what the people are like.”

The drummer, Cable, described the immersive experience of music shows with house venues.

“With a bigger show [location], people are paying attention to the music, but with house shows, it’s all about being there and being a part of the show,” Cable said.

In addition to music, Vuke Fernandez featured artists and their work at the Scumfest. As an artist and graphic design student himself, Vuke Fernandez aimed to equally feature both music and art.

“I think that’s one thing that’s really overlooked at a lot of concerts that say that they’re an art show and a concert,” Vuke Fernandez said. “A lot of the time you have like one table with, like, five different people and they don’t talk about it and nobody looks at it.”

Artist Jasmine Membrila, whose work was featured at the Scumfest, described the general atmosphere of the event positively.

“Everyone out here is super welcoming and inviting and I think that’s cool,” Membrila said. “I’m kind of shy and weird, so it makes me feel good.”

Another artist at the event, Cameron Webster, who goes by her artist name “Rosy” related her definition of scum to one of her artworks called “Roadkill.”

“Roadkill is just left on the side of the road,” Webster said. “It’s really sad and dark, but I like turning my dark things into something beautiful and just feeling like no one really sees your struggles.”

Webster also said that was part of why she considered herself scum.