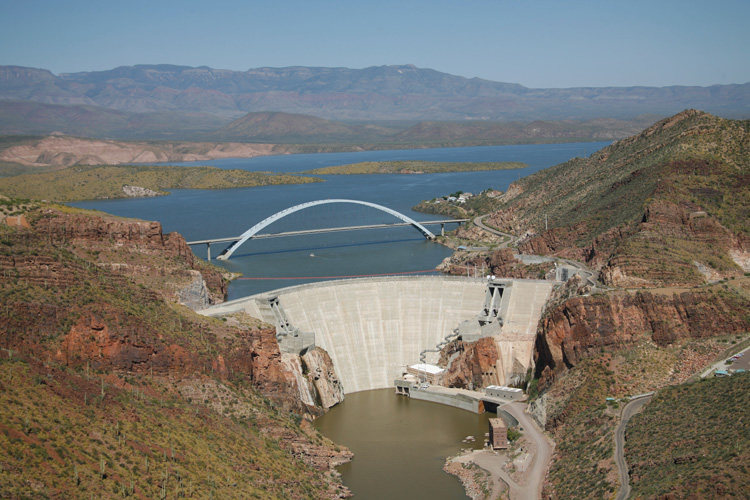 As Arizona’s oldest environmental advocacy group, Arizona Forward has a water committee made up of more than 60 people tied to various organizations — including cities and counties from across the state. Together, these individuals and organizations explore every facet of our desert’s most precious commodity — water. From exploring how water plays a role in industry operations and recreational uses to seeking the most innovative and progressive sustainability and conservation methods, Arizona Forward honors and supports the champions of Arizona’s future water planning.

Arizona Forward’s 2019 Environmental Excellence Awards reflected that focus as the group honored several water-related projects, including the Governor’s Award for Arizona’s Future, which was presented to Arizona’s Drought Contingency Plan Process (DCP) and committee co-chairs. After months of collaboration and compromise, the DCP plan details how impacted stakeholders, including Arizona and other states, will adapt to reductions on Colorado River water to secure water supplies for Arizona residents.

You down with DCP?

The DCP is not a singular solution, but it is one essential cog in Arizona’s long-term plan to protect the future of our water.

“With the Drought Contingency Plan in place, we have some certainty about what to expect if Lake Mead’s level continues to decline,” says Ted Cooke, general manager of Central Arizona Project (CAP). “Since the DCP lasts through 2026, we have some time to put the next program in place with the other six Basin States.”

Although some wonder if Arizona’s water conservation and sustainability efforts will see our desert state through the next five decades, the DCP is one of many examples of what the state has successfully accomplished when it comes to water planning. A new higher tier level – Tier Zero – triggers reductions in water supplies to users. Lake Mead is expected to drop to Tier Zero in 2020 and 2021. Prior to the formal adoption of the DCP, Arizona had been conserving water in Lake Mead at Tier Zero levels since 2016, according to Cooke.

“Now that DCP is in place, Arizona and other Lower Basin states stored an additional 600,000 acre-feet in Lake Mead — in 2019 alone — all because of the new rules regarding access to Intentionally Created Surplus (ICS) under DCP,” Cooke adds.

To give it some perspective, an acre-foot is equivalent to 325,851 gallons of water.

A key piece of the DCP requires states and water suppliers to “bank” water in Lake Mead, where Arizona’s share of the Colorado River is stored. It’s working – so far. The lake is 22 feet higher than expected. Almost half of that was due to storage and contributions to system conservation. The rest came from heavy snowfall in the Rockies.

But Arizona’s proficiency in planning — even perhaps initially unintentional — reaches back significantly farther than the creation of the DCP.

“Our statewide demand for water is slightly lower than it was in the mid 1950s, although our population has more than doubled during that time period,” says Sethuraman Panchanathan, executive vice president of Arizona State University’s Knowledge Enterprise. “And currently, we are using slightly less water than we did five decades ago. What this tells us is that there is hope moving forward.”

“We live within the water supplies we currently have and have also managed to store millions of acre-feet underground,” adds Cooke. “Our consumption today is about the same as it was 60 years ago, even though the population is nearly seven times larger and the economy is nearly 25 times as big.”

Moving forward, DCP stands as a historic and valuable precedent of collaboration between states. It will also serve as an integral component of Arizona’s future water supply. Cooke describes the initiative as another step in the long list of difficult water-related challenges that have been successfully addressed by Arizona. This includes the authorization of the CAP in 1968, the passage of the Groundwater Management Act in 1980 and the creation of the Central Arizona Groundwater Replenishment District (CAGRD) in 1993, among others.

“Arizona has a long history of careful groundwater management in the state-designated Active Management Areas (AMAs) pursuant to the 1980 Groundwater Management Act, as amended,” says Sharon B. Megdal, director of the University of Arizona Water Resources Research Center. “Over 80 percent of the state’s population lives in an AMA. Since the mid-1980s, we have carefully integrated Colorado River water into Central Arizona’s water portfolio.”

“Because we live in a desert, we must take these bold and creative steps,” Cooke says. “We have no choice. These challenges are getting harder, but because of our extensive efforts over the years, we continue to get better at it.”

According to Dave Roberts, associate general manager of SRP’s water resources, Arizona has been in a prolonged dry period for nearly 25 years. Drought is not a foreign concept in an arid environment, but it’s helpful to understand the additional challenges it presents to our state in particular.

Since the bulk of Arizona’s population resides in Maricopa and Pima counties, rainfall alone is not sufficient to sustain a densely inhabited desert climate. Thus, fossil/groundwater and renewable water sources are essential.

“Before CAP was here in the early 1970s and brought fully online in the 1990s, we had an overdraft of water,” Cooke says. “It’s quite a bit different now, but the challenge with groundwater is certainly not over yet.”

Despite the drought and associated challenges, Arizona’s water systems have been able to accommodate the needs of its occupants.

“Nowhere else in the country does a major metropolitan area possess a water supply that is as resilient to such long, dry periods,” Roberts says. “Drought cycles of 20 to 30 years are normal for our arid region. Based on tree ring studies that look back nearly 1,000 years, we know that these extended drought periods also include ‘spike years,’ such as 2019, when SRP’s total reservoir system storage climbed from 56 percent to 80 percent in one winter.”

Past efforts in water conservation and management have positioned Arizona for a hopeful future when it comes to water, but experts collectively agree that remaining vigilant and forward-thinking must remain a priority.

“I think we all agree that we cannot rest on the laurels of our past accomplishments,” Megdal says. “Instead, we must chart our water-course forward. We face challenges going forward that are as diverse as our state’s communities and geographic features.”

“We need to plan ahead, be proactive, and seek entrepreneurial solutions,” adds Panchanathan. “If we continue as we are today without any changes, we won’t have the quantity of water we need. And, we must ensure that in addition to having the quantity of water we need, that we also have the quality. Challenges come about when we think about the safe and quality water supply we need going forward.”

Potential Arizona water issues ahead are as complex as they are varied. With fluctuating climate variables, challenges in forest-water management, water-produced energy needs and quality concerns regarding reusable water, how do Arizona’s researchers and thought leaders plan to address these elements?

“Although we have significant challenges, we also have the capacity to find solutions,”  Panchanathan says. “One of which is the compilation of a congressional committee designed with the priority of finding collaborative, innovative and collective ways to address short- and long-term water needs.”

Beyond congressional collaboration, Arizona exemplifies continuity in caring for the future of water in several areas. Again, this is a fact not lost on Arizona Forward. One of this year’s Environmental Excellence Awards went to Gila River Indian Community Mar 5 Interpretative Trail, which gives visitors a chance to learn about the traditional uses of native plants to the area and about the importance of the Gila River to the Akimel O’otham.

“The Pima-Maricopa Irrigation Project partnered with Hunter Contracting to construct a quarter-mile-long, concrete-lined ditch to deliver a portion of the Community’s Colorado River (CAP) water into the Gila River to be stored for a future day when there will be surface water shortages,” says Stephen Roe Lewis, governor of the Gila River Indian Community. “The first water was released into the Gila River on August 24, 2015. Since that time we have stored over 45,000 acre-feet in the river downstream of the MAR 5 Gila River Interpretive Trail.”

“The University of Arizona has a long history of performing cutting-edge research related to water quality, water quantity and engaging with and educating communities throughout the state,” Megdal says. “UA faculty and staff have been highly engaged in researching the safety of food grown in Arizona, the quality of our water supplies and understanding hydrologic systems, as well as working to understand how the built environment can enable greater water use efficiency.”

ASU is helping to spearhead several water conservation and sustainability initiatives, many of which are innovative and technology-driven. This includes a proposed Water Resilience Center to bolster hydrology to the schools of humanities, engineering, economics and more, as well as resources like the Virtual Water Security Decision Support Tool to understand, model and predict water systems under future extremes, and a Drought-Proofing Manufacturing Hub to support water-aware business growth and value of water as raw material in product development.

“At ASU, we conducted a survey of corporate water users in Maricopa county,” Panchanathan says. “Seventy percent reported that water was critical to their business. However, they also stated that they did not understand the true cost of water usage beyond their water bill. This means we need to get these industries together to discuss water practices.”

To address some of the challenges associated with forest areas such as the Lower Salt River, UA is helping to champion the Lower Salt River Riparian Restoration Project in an effort to protect water supplies by reducing the risk of fire, flood, sedimentation and erosion within the watersheds.

“The NFF has teamed up with the Tonto National Forest, Northern Arizona University, Intel, SRP’s Trees for Change program, Boeing, Arizona Audubon, Arizona Forward and Salt River Tubing to launch a broad program of work to begin restoration of the Lower Salt River,” says Rebecca Davidson, director of the Southern Rockies Field Program for the National Forest Foundation. “In doing so, we are leveraging a range of interests and opportunities — from measuring the volume of water replenished, the number of trees planted, increased diversity in birds and wildlife, and connecting communities and youth to the values of natural resources and being outdoors.”

Along with the spirit of collaboration, Arizona has what all experts agree is an exceptional infrastructure in the state to support smart water planning for the next 50-plus years. The key to continued success is leveraging existing relationships, celebrating bipartisan congressional support and continuing to work smarter and harder.