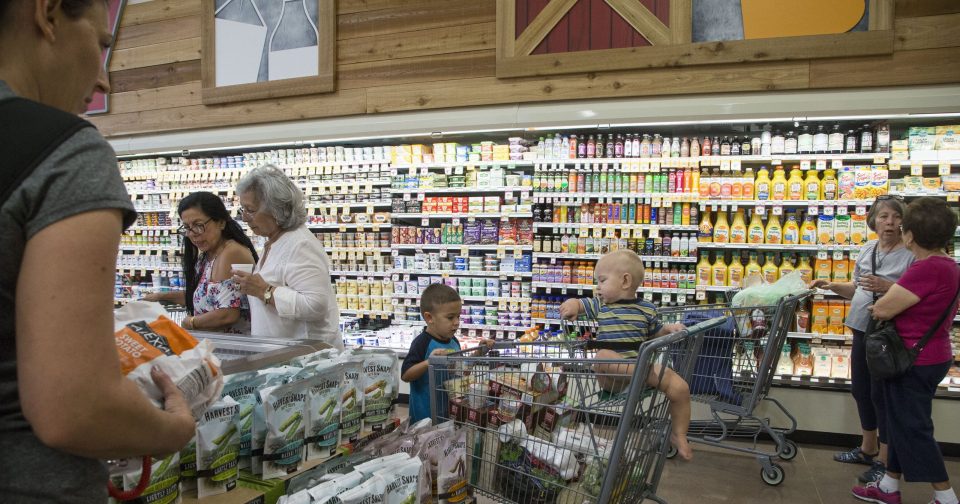 WHO SAID IT: The Arizona Democratic Party

THE COMMENT: “Grocery prices in AZ have seen a 12% spike since last year thanks to Republican trade policy.”

WHAT WE’RE LOOKING AT: Have Arizona’s grocery prices risen by 12% due to Republican trade policies?

OUR RATING: No stars: Unsupported

ANALYSIS: In a Facebook post encouraging followers to register to vote, the Arizona Democratic Party cited a statistic about the rising cost of food in the state.

The post said, “Grocery prices in AZ have seen a 12% spike since last year thanks to Republican trade policy.”

Matt Grodsky, the director of communications for the Arizona Democratic Party, said this figure comes from an article by the Eastern Arizona Courier that explains the results of an Arizona Farm Bureau Federation Marketbasket Survey.

The Arizona Farm Bureau Federation uses its quarterly Marketbasket survey to examine how the average prices of basic grocery items in Arizona change over time.

For the second quarter of 2019, the survey said. “Arizona’s food prices have increased approximately 12%.”

The latest Marketbasket survey for the third quarter of 2019 shows the prices of the same grocery items rose by 13% from the same time last year.

The outreach director for Arizona Farm Bureau, Julie Murphree, said these numbers come from consistent comparisons of 16 grocery items that are “very typical for a family of four to purchase on a regular basis.”

Murphree described the Marketbasket surveys as “a trend watch in food prices so that we can give the Arizona family a heads up.”

“While we stress we don’t feel like this is scientific in any way, we do stress that we’re always comparing apples to apples, and that’s how we can make these comparisons,” she said.

Murphree said ongoing trade policies may affect grocery prices, but she said it’s not the only factor driving up the cost of food.

“I wouldn’t tag that 12% increase against singularly the trade wars,” Murphree said. “It’s a variety of things that we have to factor in when we look at it. But we can know that there’s all sorts of things going on in the market that really make prices feel some of the impacts.”

Bart Hobijn, a professor of economics at Arizona State’s W.P. Carey School of Business, said the Consumer Price Index (CPI) may be a more effective way to gauge trends in grocery prices.

“The CPI data is based on a much larger set of price quotes and a more extensive basket of goods,” Hobijn said.

According the the Bureau of Labor Statistics, the CPI measures “the average change overtime in the prices paid by urban consumers for a market basket of consumer goods and services.”

The bureau breaks down the specific CPI for “food at home,” which accounts for food purchased at grocery stores. In October 2019, the CPI for food at home for the average U.S. city was up by 1%. For the Phoenix-Mesa-Scottsdale region alone, the CPI increased by 4.2% since October 2018.

According to Hobijn, the CPI increase for Arizona “is substantial, but not unprecedented. Still, 4.2% is much lower than the number from the informal Marketbasket survey.”

Neither the CPI nor the Marketbasket survey detail the cause of the price increases.

Murphree told the Eastern Arizona Courier in June that, “The global trade issues may have some influence on our prices at the grocery store.”

In an email to AZ Fact Check, the Democratic Party’s Grodsky quoted that line, adding, “Of course, the ‘global trade issues’ being referenced here are the backdrop of the Trump administration haphazardly entering into trade wars with a number of close trading partners as well as China.”

Donald Trump’s presidency has been characterized by an “America First” economic policy aimed at reducing the United State’s trade deficit. In doing so, the president has imposed billions of dollars in tariffs on imports from other countries.

The relationship between certain products and tariffs can be complicated. Tariffs are paid by U.S.-registered firms to U.S. customs for the products they import into the country. In return, importers often raise their prices to offset higher costs, passing the burden on to customers.

But how much do “Republican trade policies” — such as the tariffs enacted by Trump — really affect prices at grocery stores?

According to Troy Schmitz, a professor at the W. P. Carey Morrison School of Agribusiness at ASU, it depends on the product in question.

“The percentage increase a tariff would have on prices depends on a good-by-good basis. And in order to figure that out, you have to actually have complicated economic models to take time to develop. You can analyze counterfactual situations with simulations and things like that, and it usually takes an economist two or three years to do that,” Schmitz said.

According to the U.S. Department of Agriculture, consumers bought $137 billion worth of imported food in 2017. These imports make up about 25% of total U.S. grocery store sales, according to USA TODAY.

Imported food is vulnerable to price hikes due to tariffs, but according to Schmitz, these aren’t applicable to many of the products on the Marketbasket survey, which are mainly American-made products.

“Most of the things on here just come from the U.S. We don’t import fluid milk, we export milk products mostly,” Schmitz said. “These are fresh food products on here, so if we went to processed food products, then I bet you we would see a tariff effect. Canned food that are imported from other countries, those you would see, but those aren’t in the survey.”

“Most import tariffs are not on items that you buy at the grocery store, they’re more on things like apparel and furniture and things that are made in China,” Hobijn said. “So you would not expect there to be enormous effects.”

While figuring out the direct impact a tariff has on a product’s price is challenging, many other factors affect the cost of certain goods.

Of 16 common household grocery items on the Marketbasket survey, a pound of bacon had the greatest price increase of $2.34 since last year. Schmitz explains this is not necessarily resultant of tariffs.

A virus has infected large portions of China’s pig population, delivering a blow to the country’s pork market and leading to higher prices for pork products at U.S. grocery stores, according to Schmitz.

Murphree agreed that swine fever is a reason behind price hikes for pork products.

“We know that there are circumstances in the global food market that might influence those higher prices, and the most obvious is not so much the trade war, but the swine fever in China that is continuing to annihilate their pig herds, because they haven’t been able to control it. We can speculate that that has an impact on it,” Murphree said.

Although the Arizona Farm Bureau Federation has documented a 12% price increase in several household grocery items, they don’t pin it on Republican trade policy.

“There is no way for us to determine how much that 12% is impacted by trade policy, because we’re actually not attempting any correlation or comparison. It’s just almost impossible to do,” Murphree said.

“The one constant with food prices is what goes up will come down and vise versa.”

However, this increase only applies to these 16 items, and not all grocery prices Arizona consumers may experience, as the Arizona Democratic Party implied. Although the ongoing trade wars may have some effect on the price of some groceries, there are many other factors that influence food costs. Furthermore, processed foods not included in the Marketbasket survey are much more likely to be affected by tariffs.