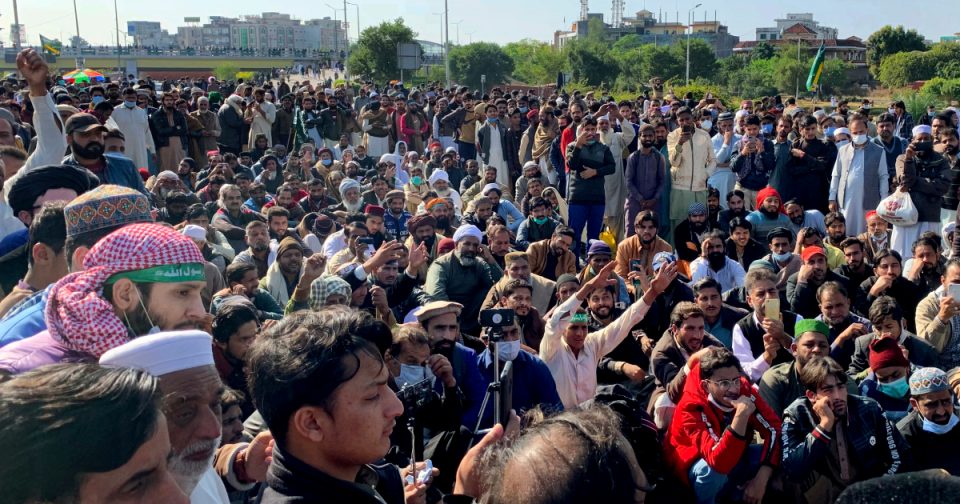 Islamabad, Pakistan – More than 1,000 protesters have blocked a major highway in the Pakistani capital, Islamabad, demanding the expulsion of the French ambassador and end of diplomatic ties with the European country over perceived Islamophobia.

Protesters from the far-right Tehreek-e-Labbaik Pakistan (TLP), a hardline religious political party that has campaigned on the issue of curbing blasphemy against Islam, blocked the city’s main Faizabad interchange on Monday, a day after violent clashes with the police.

Riot police were deployed to guard government buildings across the capital, with authorities using shipping containers to block important roads around the sit-in site.

Mobile phone services remained blocked for a second straight day across most of the city, as authorities attempted to disrupt the protesters’ ability to organise. Most Pakistani news media did not cover the protest.

The TLP, led by religious leader Khadim Husain Rizvi, has often agitated against the Pakistani government on issues around blasphemy, a sensitive topic in the South Asian country, where the crime carries a potential death sentence.

Monday’s protest, which began a day earlier, was aimed against the government of French President Emmanuel Macron, who made remarks about Islam and “blasphemy” in recent months that have sparked outrage in several Muslim-majority countries, including Pakistan, Turkey and countries across the Gulf.

In October, following the beheading of French teacher Samuel Paty by an 18-year-old man for showing cartoons of Islam’s Prophet Muhammad in his class, Macron hailed the teacher as a “quiet hero”.

“Samuel Paty was killed because Islamists want our future and because they know that with quiet heroes like him, they will never have it,” said Macron.

Most Muslims believe any depiction of the Prophet is blasphemous.

Earlier, in September, Macron had defended the “right to blaspheme” under free speech rights, and pledged to fight what he termed “Islamic separatism” in France through administrative measures.

Pakistan and France do not hold deep economic ties, and bilateral trade between the two countries amounted to just more than $778,000 last year, according to Pakistani central bank data.

In October, Pakistani Prime Minister Imran Khan said Macron’s comments “encourage Islamophobia”, and the French ambassador to Pakistan was summoned to the country’s foreign ministry to register a protest.

Protesters in Islamabad said the government had not done enough on the issue, and demanded that the country cut diplomatic ties with France and expel French Ambassador Marc Barety over the issue.

“Our demand is a very light one, only to remove the ambassador and to cut ties,” said Zaheer Mushtaq, 35, who had spent the night at the Faizabad protest. “This is for the dignity of the Prophet, which France has violated […] and which cannot be forgiven.”

Late on Sunday, police used tear gas and batons on protesters as they approached the Faizabad protest site, with local media reporting dozens of injuries after the clash.

Al Jazeera was not able to immediately verify the number of injured due to the continuing communications blockade imposed by the authorities.

“We were picking up [tear gas] shells from off the ground as they fired them at us, and then we’d throw them back at them,” said Shaukat Hussain, 25, a protester, gesturing to minor burns on his hands.

At the centre of the protest, TLP leaders delivered speeches recounting the night’s violence and calling on protesters to remain steadfast. A pile of scores of used tear gas shells lay at their feet.

In 2017, the TLP held its largest anti-government protest, also at Faizabad, with thousands of protesters camped out for three weeks, demanding that a minor change to the wording of an electoral oath be reversed.

They succeeded in forcing the change, as well as the resignation of the country’s then law minister, Zahid Hamid, who was held responsible by protesters for the problem.

A year later, the group once again held days of protests at the site against the acquittal of Christian woman Aasia Bibi in a blasphemy case, one of the most highlighted cases in the country.

Following the break up of that protest by authorities, scores of TLP leaders, including Rizvi, were charged with “sedition” and arrested. He was released on bail last year.

“We will stay here for a year if we have to,” said protester Mushtaq, as dozens of young men lined up nearby to be served lunch by TLP activists in the brisk winter sunshine.

The Voters Have Spoken: When And How New Jersey Will Give Life To The Cannabis Market | McCarter & English, LLP

In Asia Pacific the climate crisis is happening now, not in the future