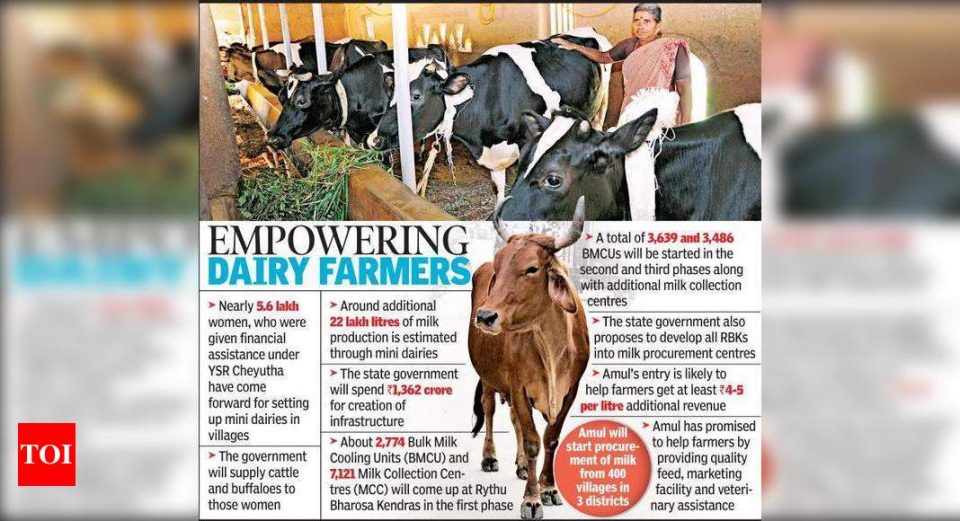 Amaravati: In what could be a game-changer moment for rural economy, milk giant Amul will launch procurement of milk from farmers in three districts on December 2.
Chief minister YS Jagan Mohan Reddy’s decision to rope in Amul will pump oxygen to the cooperative dairy sector in the state. Despite being one of the largest producers of the milk in the country, the farmers in the state could not reap rich dividends due to the dominance of private players. The private dairies have exploited the poor farmers, squeezed milk and monies to fill their own kitties leaving the producers in tatters.
The cooperative milk producers unions (district dairies managed by the government) were systematically weakened over the last two decades giving a lot of space to the private dairies to occupy. This has pushed the milk producers into troubles as the dominant private dairies offered very low returns prompting millions of farmers giving up the cattle rearing and milk production.
YS Jagan Mohan Reddy realized the seriousness of the issue during his interactions with the rural poor during his near 3500-km long padayatra. After taking over the reins of the state, YS Jagan directed the officials to bring Amul on board to bring cheers back on to the faces of milk producers.
“Milk procurement under AP-Amul project will take off in Prakasam, Chittoor, and Kadapa districts with distribution of cheques to dairy farmers by the chief minister on Wednesday,” said animal husbandry minister Sidiri Appala Raju. He said that the state government had signed an MoU with Amul to encourage milk cooperative societies, especially those run by women.
Experts in the dairy sector say Amul’s entry will bring many farmers back into milk production. Since the government has set its focus on empowering women through dairy development, it is going to change the milk production scenario in the state.
“We are immensely happy to be back in milk production as we purchased cattle thanks to the support from Jagananna Cheyutha scheme,” said Manikyamma of Darsi village of Prakasam district.
previous post

Under the skin: how traction control got a grip on the car industry

Jan Suwinski Retires from THOR Industries’ Board of Directors