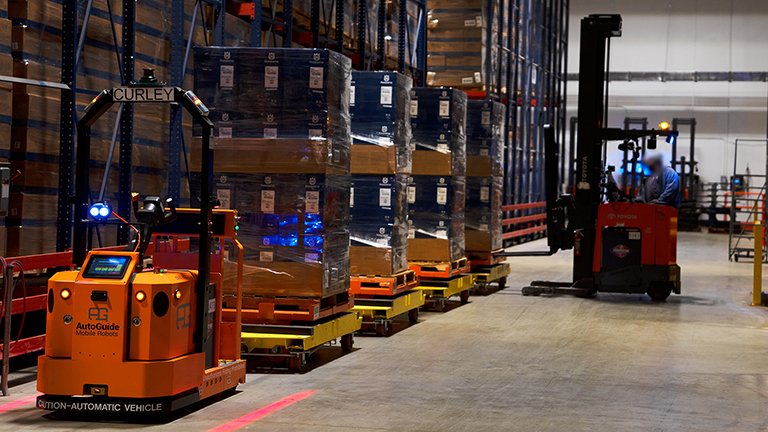 In August, Rob Sullivan had an installation scheduled for two of his autonomous mobile robots at the Deutsche Post DHL Group’s Innovation Center in Troisdorf, Germany. But with travel restrictions from the U.S. to Europe due to the coronavirus pandemic, Sullivan’s installation technician couldn’t fly to Germany to help with the job.

So, in a very 21st century solution, Sullivan’s team at AutoGuide Mobile Robots did the installation virtually.

“After much consideration, we decided the best way to proceed was to train our local (German) system integrator, ST-IR (ST Integration & Robots), using a wearable headset from RealWear,” Sullivan, CEO of AutoGuide Mobile Robots, wrote on LinkedIn, a post that Smart Manufacturing verified. “Together, working virtually with ST-IR, we installed an AutoGuide MAX-N Pallet Stacker and MAX-N Tugger in the ST-IR facility in order to train them how to do the implementation.”

The folks at ST-IR then took the knowledge they acquired from AutoGuide and the two autonomous mobile robots (AMRs) to DHL, where the German integrators were able to successfully install the tugger and pallet stacker—with AutoGuide technicians virtually assisting from the U.S. The ST-IR team was able to make the installation in a few days, without affecting the project’s timeline.

Sullivan and his team got virtual feedback, too.

“I can absolutely confirm that from the ST-IR side we are happy and proud to do the installation and had a great time at DHL,” Christoph Leutner, general manager of operations at ST-IR, a full-service integrator for production-based robotics, commented on Sullivan’s LinkedIn post.

While AutoGuide used an integrator to do the remote installation overseas, AutoGuide’s technicians can assist manufacturers located in the U.S. directly.

“AMRs are focused on the user/owner being able to program, customize and integrate them themselves, whereas AGV [automated guided vehicle] makers tend to do that for the customer,” said Fleming, who is global product manager for AMRs and AGVs for systems integrator MHS.

While AMRs and AGVs may do some of the same tasks, many of which are focused on moving material from one location to another, there are other differences between the two technologies.

“The biggest differential is in the mindset that the AMR is decentralized and doesn’t need a fleet manager,” he added. “Within the last two years, AMR makers have begun offering a fleet manager for the very reason that AGVs have always had a fleet manager.”

That has to do with the number of autonomous vehicles operating in one location. With growing numbers, eventually the business has a fleet, and management of that fleet becomes a necessity.

“As fleet sizes grow and tasks targeted are more deterministic in nature [the tasks need to be executed within a specific timeframe consistently throughout the day], the need for efficient traffic management and order allocation management is being recognized by the AMR manufacturers,” Fleming said.

There are other differences between AGVs, which were first invented in the 1950s, and AMRs, which have been around for about a decade, he said.

That intelligence manifests itself in many ways, including navigation. If an AGV encounters an obstacle, it will typically sit until someone moves the object out of the way. An AMR, on the other hand, will navigate around an obstacle or choose another path to get where it needs to go.

The need for that kind of flexibility spurred one entrepreneur to start her AMR company more than six years ago.

Program the robot with drag-and-drop

“We started the company focused on labor shortage issues and flexibility issues with the current automation technology,” said Fetch Robotics CEO Melonee Wise. “The problem we were focused on solving was how to provide flexible goods movement, whether it’s line-side delivery or just-in-time delivery or from workstation to workstation.

“One of the things we heard from manufacturing … engineers or process engineers is that a lot of the existing automation technology took a very long time to set up. It took a lot of maintenance. It took a lot of installation. And it was very hard to change,” she said.

“So, when they wanted to change the line at all due to seasonality or whatever, it was very hard to make all of these changes and it required a lot of on-premise IT support, as well.”

Fetch makes: a line of robots for automated material handling and automated data collection; platforms for robotics research; a platform for commercial robots; and partner disinfection robots, which use Fetch’s AMR base with an industry partner’s disinfecting technology.

After a Fetch customer uncrates his AMR, he drives it around his facility to create a map. Then he draws the paths he wants the robot to take on the map. He programs the robot with a drag-and-drop menu of workflow instructions. All of these steps are supported remotely, due to the pandemic, by a Fetch applications engineer.

Subsequent interactions with the AMR are through touch screen, tablet or scan gun.

“We’ve built a lot of componentry that makes integration into the factory very … easy to integrate with fixed automation because we’re [just] one part of the automation story,” Wise said. “We connect and integrate with management execution systems, to the physical automation, to PLCs. We connect to hand scanners, voice systems sometimes, depending on what the customer would like us to integrate with.”

Wise’s view of the entire automation in a factory and the job of integrating one part of that entire picture may stem from her previous work as one of the core developers for ROS, or Robot Operating System, an OS with an additional layer for visualization and simulation.

Fetch robots use some ROS, but have a Linux-based operating system.

For fleet management, the FetchCore robotics software sits in the cloud and provides analytics, scheduling, robot configuration and task and workflow management.

Some of the tasks Fetch’s AMRs do in industrial plants include:

Sullivan’s AutoGuide robots consist of a base AMR with custom adapters, including a tugger, pallet stacker and high bay forklift.

“Just like a robot where you have an end effector on it,” he said in an interview with Smart Manufacturing. “You wouldn’t build a robot just for one application. You build a robot and put different end effectors on it. That’s how we built this. A robot with adaptors that are equivalent to end effectors.”

A tugger he sold to a consumer goods manufacturer in Arkansas works in an 800,000-square-foot plant and warehouse, with a 4 percent grade between the manufacturing and warehousing areas.

“They didn’t want to go with a traditional AGV because of the distances and the expense it required for putting in that magnetized structure,” Sullivan said. Newer AGVs use magnetic tape on floors to navigate instead of embedded wires like earlier models used.

“Any large facility—whether a distribution center or a warehouse associated with manufacturing—would require expensive and time-consuming infrastructure changes to install the permanent wires, magnetic strips, or sensors embedded in the floor,” he said.

“If a company’s processes change, the facility must be updated again. They just aren’t practical or cost effective to use within any size facility.”

“We quite uniquely in the market use cameras for our navigation, and we have found that to be the most reliable navigation in the AMR space,” said Jeff Christensen, VP of product.

The 10 cameras on Seegrid’s two VGV models—a tugger and a pallet truck—work in five stereoscopic pairs and capture hemispheric vision data. The VGV’s software then figures out what’s important in the environment.

This great amount of data makes route changes possible while production continues to run, “and nobody else can do that,” Christensen asserted.

“Manufacturing, warehousing and distribution are highly dynamic environments, and in order to navigate reliably in those sorts of real-world conditions you are much better off gathering far more data than you can possibly deal with and then let the software figure out what’s important in the environment around you as opposed to limiting your view and then trying to extrapolate up from there and guessing what’s around you,” he said in comparing true 3D vision navigation with laser-based guidance with LiDAR.

The most common job for Seegrid’s robots in manufacturing is parts delivery to a line, and their real value proposition comes into play at plants that can’t keep up with demand for their product.

Out of the coal mines and into the factories

While robots are commonly blamed for taking American jobs, AutoGuide Mobile Robots not only created jobs to install and maintain their robots but also filled some of those jobs with retrained coal miners.

Located within miles of the companies’ manufacturing facilities in Kentucky, eKAMI launched in 2017.

Students at eKAMI participate in accelerated programs in computer numerical control machinery for the robotics, aerospace, medical and other advanced manufacturing industries.

“Finding skilled personnel for manufacturing and installations can be extremely difficult, so we’ve been thrilled to find a resource like eKAMI,” said AutoGuide CEO Rob Sullivan. “Not only do we get hard-working and highly skilled technicians but they get jobs they likely didn’t even know were possible for them while working in the coal mines.”