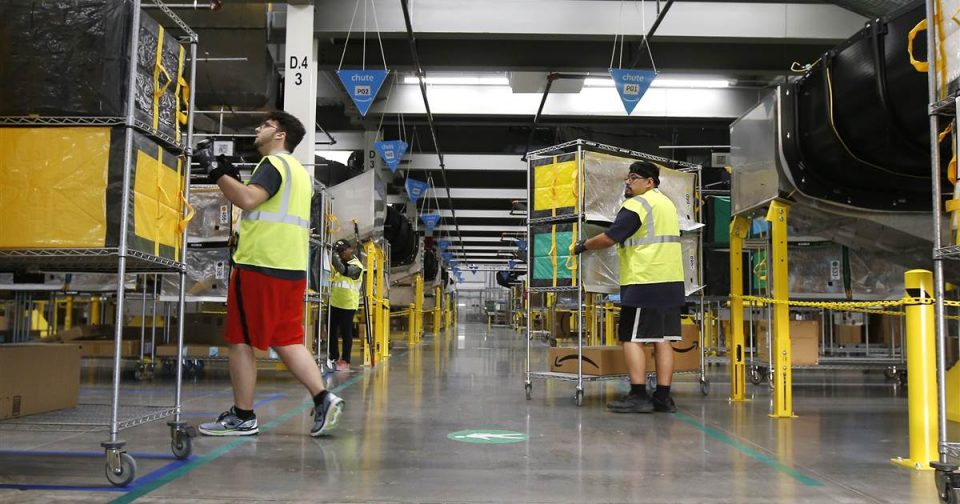 The Prime Day deals are once again upon us, this time spread over two days. With all the additional customers Amazon has attracted in the past half year thanks to the pandemic, it could be the company’s biggest sales event ever.

Amazon claims it’s a company that is “customer obsessed” where “leaders start with the customer and work backwards.”

Amazon claims it’s a company that is “customer obsessed” where “leaders start with the customer and work backwards.” That is supposed to mean that their actions are supposed to benefit all of us — the consumers — who spend less and have a more convenient shopping experience because of their focus on those metrics. But beneath all that consumption lurks depressing questions about the consequences of Amazon’s massive success.

The company has long been accused of mistreating its workers. Last year, Reveal and The Atlantic found that “the rate of serious injuries for those facilities was more than double the national average for the warehousing industry” in 2018. That was damning enough, but a new Reveal investigation has provided a much more detailed picture of worker injuries and what the company is (and isn’t) doing about it. One of Reveal’s major findings? Injuries spike at peak times — and that includes Prime Day.

Amazon, for its part, has consistently and forcefully pushed back against any claims that its warehouses are unsafe or that injury rates are above average.

In 2019, Amazon executive Jeff Wilke told PBS Frontline that the company’s use of robots in its warehouses “make the job safer” and the company also provided a statement to Business Insider stating, “we know for a fact that recordable incidents do not increase during peak.” These assurances sound great to people who want to keep shopping at Amazon, but are they true?

Reveal’s reporting finds that across its fulfillment centers, Amazon recorded a rate of 7.7 serious injuries per 100 workers in 2019, which is not only nearly double the industry standard, but 33 percent higher than its rate for 2016. And despite Amazon’s claim that robots make workers safer, Reveal found the opposite: warehouses using robots recorded more injuries than those without them. At a robotic warehouse in Dupont, Washington for example, there were 22 serious injuries for every 100 workers — more than five times the industry standard.

Amazon denied Reveal’s requests for interviews, and only provided a general statement about safety when sent a detailed list of questions. After publication, though, Amazon told The Verge that Reveal’s investigation actually showed the company’s “deep focus on the safety of our teams.”

But Reveal’s reporting suggests the opposite. Injuries increase during peak periods like Prime Day (or in this case, Prime Days) and the holidays. Reveal explains that Prime Day 2019 was “the year’s most dangerous week for injuries at Amazon fulfillment centers, with nearly 400 serious injuries recorded across the country.” So what is causing these reportedly higher rates of injury in robotic warehouses and during peak times?

The answer, it seems, has everything to do with the pressure Amazon places on its workers. Given that adherence to targets is closely tracked by management, there’s a lot of incentive for workers to push themselves. Reveal spoke to a physician who inspected Amazon warehouses for the Occupational Safety and Health Administration who explained that “studies have shown that production rates have a direct impact on injuries.”

Ultimately, this report paints a picture of a company that is not doing right by its workers — or its consumers, who have the right to know what is happening to the workers fulfilling their orders.

And it shouldn’t come as a surprise. Amazon is notorious for fighting workers’ attempts at unionization, which would give them the power to push back against management’s one-sided demands. This was further put on display during the pandemic. Workers charged that the company wasn’t doing enough to keep them safe from Covid-19 infection, and brought in its safety protocols too late. Some workers said they had to track Covid-19 cases at their workplaces themselves because the company wasn’t keeping them informed. Amazon recently announced nearly 20,000 of its U.S. workers have tested positive.

But the company has also recently stepped up its actions against workers who pushed back. It fired workers for tracking Covid-19 cases and publicly criticizing the company, and was found to be tracking private Facebook groups and internal listservs used for labor organizing. It also fired Christian Smalls, a worker in Staten Island who had been with the company for five years, after he helped organize a walk out at his warehouse. Amazon claimed Smalls was fired for breaching social distancing guidelines, but leaked notes from an internal meeting with top executives highlighted a plan to smear him as “not smart or articulate” in the media.

In response to all of this, Tim Bray, a senior engineer at Amazon Web Services, resigned from the company. In an open letter, he wrote that he “quit in dismay at Amazon firing whistleblowers” and the bigger problem was that “Amazon treats the humans in the warehouses as fungible units of pick-and-pack potential. Only that’s not just Amazon, it’s how 21st-century capitalism is done.”

But if the customer is Amazon’s focus, this “obsession” may succeed at the expense of workers. This naturally presents two questions. First, with Prime Day deals showing up in your inbox, on television and in ad slots all over the web, are injuries that could arise from your purchase worth the money you might save?

Second, and on a more fundamental level, is it ethical to shop at Amazon if the massive company cares more about profits than the health of its workers? Over the course of several decades, we’ve been taught to see ourselves as consumers seeking out the best deal instead of workers who should stand in solidarity with one another. Amazon seems to have brought this notion to its logical conclusion, and but has that really worked out in our favor?

Unionization has plummeted, wages have stagnated and it’s become harder than ever for most people to find a good job. Now millions of people have once again lost their jobs, while Jeff Bezos’ wealth soared by more than $70 billion. We’re not individual consumers; we’re workers with shared interests, and that means not sacrificing one another for a good deal that ultimately benefits the richest man in the world.

Paris Marx is a socialist writer and host of the “Tech Won’t Save Us” podcast.