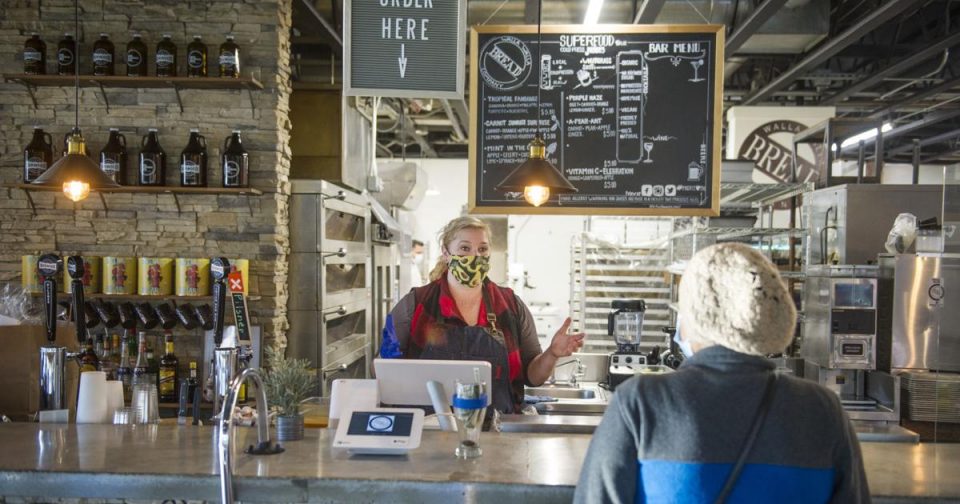 Lockdowns and physical distancing have given restaurant takeouts a boost during the pandemic as “ordering in” has become many people’s “go to.” But starting Saturday, if you want utensils and other disposable items with your next to-go order, you’ll have to ask.

A new state law will restrict Washington businesses from automatically including single-use food service items such as plastic straws, utensils and condiments with food orders.

Those convenience items will still be available upon request, but the customer will have to ask, confirm their choice when asked, or select the items from a self-serve station.

Customers are also encouraged to bring their own reusable food serviceware.

The rule, signed by Gov. Jay Inslee in May, is intended to reduce single-use plastic waste and increase recycling.

“The bag ban had a much more significant impact on business practices and the bottom line … for all the loops our businesses have been thrown in the past year and a half, this one is barely a ripple,” Witherington said.

Instead, she is focused on education for shoppers. “We want to make sure businesses are ready to navigate whatever uncertainty may arise.”

Witherington has been distributing a resource guide to local businesses compiled by the Washington State Department of Ecology to help with outreach to shoppers.

Items that fall under the new rule include:

“It will be a transition for us, but with so many alternative options to plastic these days, we don’t foresee this being a real issue — apart from maybe a small rise in cost,” Thonney said.

“A big piece of this will be notification to the customer, but frankly, Walla Walla is a super understanding community. They recognize where our hands are tied,” he said.

“I don’t foresee this having much of an impact on our operations,” Potter said.

But some businesses say they are concerned about how they will navigate the change.

Popular lunch takeout spot Stone Soup Café and Souper Supper’s owner Aaron Leen said he didn’t yet have a plan of how the restaurant would handle the new rule.

“Considering we deal with hundreds of customers every single every day, I think this will be terrible,” Leen said. “Just like the plastic bag ban, this is a waste of time in my opinion.”

Repeat noncompliance by businesses may result in fines, according to the Department of Ecology. Fines can be no less than $150 for each day in violation, with a cap at $2,000 per day, according to the bill text.

The law is part of a larger piece of legislation aimed at reducing plastic waste in packaging and products used every day, said Shannon Jones, materials management coordinator with Ecology.

“This is not a ban. This doesn’t mean people cannot get single-use utensils with their takeout. It’s an attempt to reduce the waste of people using items that would have ended up getting thrown away or into a drawer,” Jones said.

U.S. consumers toss nearly 1 trillion single-use food products each year, according to a report cited by the Department of Ecology in a December news release.

“This is part of a national issue of addressing inconsistent recycling programs with drastically different lists of what’s accepted. There’s also a lot of consumer confusion around recycling,” Jones said.

While all municipalities are required to provide a recycling option in Washington state, the decision around what is accepted into the local recycling stream is made at the local level — another reason for lack of uniformity between recycling programs in the region.

In the city of Walla Walla, the only recyclable items are clean and dry paper, cardboard, aluminum and tin. Plastic and glass are not accepted.

Shane Prudente, Walla Walla’s Public Works communications coordinator, said he believes many residents are unaware that the city is unable to recycle plastic, despite their best efforts around public education and outreach.

“I would imagine that with this new legislation taking effect, we would see less plastic in the recycling stream,” he said.

Prudente says the decision not to recycle plastic and glass is due to cost.

In a unanimous decision on Oct. 14, 2020, Walla Walla City Council accepted a committee recommendation to suspend plastic recycling, a rule that went into effect at the start of 2021.

The decision was part of a strategy intended to correct misuse of the recycling program — a challenge that drives up costs.

If the contamination of recyclable waste is reduced, the suspension will be reevaluated in 2023.

“When residents place items in a recycling bin, those items get sent by truck to Tacoma, which has a larger processing facility. That facility determines whether the items can be turned into pulp or goes to the landfill,” Prudente said, referring to Pioneer Recycing Services in Tacoma.

“So many times plastic or glass waste gets shipped a long distance only to get landfilled.”

The city of College Place faces an even more precarious recycling situation, having suspended all curbside recycling services.

The rule went into effect March 27, 2018, after the Chinese government dramatically increased quality requirements on recyclable material they would accept. College Place did not fit this new requirement.

Expanded polystyrene, commonly known as Styrofoam, will be the next material in the state to see restrictions in coming years.

In June 2023, packing peanuts and other void-filling packaging will be banned. In June 2024, Styrofoam food service products like containers, plates, bowls, clam shells, trays and cups will also be banned.

Phil Harding, director of business innovation at Columbia Pulp LLC in Dayton, said the alternative fiber pulp mill hopes its products will help the local economy adapt to the changes.

Columbia Pulp converts 250,000 tons of recycled wheat straw left over from harvest each year into a fiber that paper and packing industry manufacturers can use to make things such as food containers, towels and tissues.

“If companies no longer have molded clam shells, for example, they are going to be looking for alternatives. So that creates a market pull,” said Harding. “That’s where they may be looking to us.”

“Recycling is thwarted in areas of low population density. It’s not cost effective or the best thing for the planet to have giant trucks burning fuel driving around picking up my yogurt container,” he said.

Harding said he hopes to provide a renewable alternative fiber product that also creates jobs and supports the agricultural community in Eastern Washington.

“We know polystyrene is going to go away. That creates an exciting opportunity for our mill to create a co-product with farmers that builds a more sustainable future for our area.”

Short Interest in US Ecology Inc (NASDAQ:ECOL) Drops By 21.1%